Trump and Romney Met for Dinner 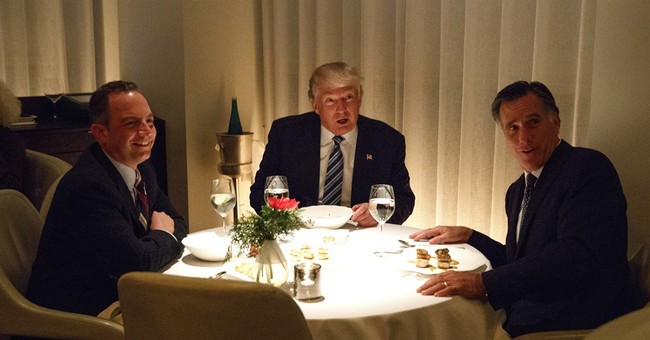 The quest to be Trump’s secretary of state continues.

Former governor Mitt Romney met the president-elect for dinner Tuesday night at Jean Georges at Trump's New York City hotel. Incoming chief of staff Reince Priebus was also a part of the dinner. The trio probably spoke about many things, but the topic was surely focused on Romney’s candidacy for secretary of state.

The trio allowed press to enter momentarily to take pictures. Also, CNN’s Jim Acosta was dining only a few seats away and live tweeted the event. Acosta detailed a lively, but friendly discussion taking place between the three men. When asked by media if the dinner was going well, Trump flashed a “thumbs up” sign.

Romney is competing against former NYC mayor Rudy Giuliani, Tennessee Sen. Bob Corker, and former CIA Director Gen. David Petraeus. Giuliani is reportedly losing favor after controversial business ties by the former mayor were revealed, and he apparently angered Trump after becoming too vocal on television about his candidacy. Nominating Petraeus is looked at as a bad move considering the former CIA director was caught giving secret information to a biographer that happened to also be his mistress. Nominating Petraeus would seem hypocritical after badgering Clinton over her abuse of classified emails throughout the campaign.

Several close aides to Trump have lambasted the idea of nominating Romney for the position. Kellyanne Conway and Steve Bannon have argued it would be a disservice to his base that elected him to shake things up in D.C. They contend he doesn’t deserve such a high-profile position after his disloyalty during the campaign. Romney made a speech in March criticizing a possible Trump presidency. He even called the eventual president-elect a “fraud” and a “con-man.”

No such dark sentiment was found Tuesday night at Jean Georges, however. Following the dinner, Romney issued praise for Trump to reporters.

Here is his full statement to the press after eating with Priebus and Trump:

"I had a wonderful evening with President-elect Trump," Romney said. "We had another discussion about affairs throughout the world and these discussions I've had with him have been enlightening, and interesting, and engaging. I've enjoyed them very, very much. I was also very impressed by the remarks he made on his victory night. By the way, it's not easy winning. I know that myself. He did something I tried to do and was unsuccessful in. He won the general election and he continues with a message of inclusion and bringing people together and his vision is something which obviously connected with the American people in a very powerful way. The last few weeks he's been carrying or a transition effort and I can tell you I've been impressed by what I've seen in the transition effort. The people he's selected as members of his Cabinet are solid, effective, capable people. Some of them I know very well. Nikki Haley and I go way back. She's an outspoken, strong, powerful leader. Tom Price is someone who actually came to my office before he had run for Senate and we spent time talking about healthcare. What an expert and solid thinker in that arena and others. Jeff Sessions is someone who I knew through my campaigns, helped me very early on, he has a distinguished record in the Senate. And, of course many others, Betsy DeVos and a long list of people, very impressive individuals. I happen to think that America's best days are ahead of us. I think you're going to see America continue to lead the world in this century. And what I've seen through these discussions I've had with President-elect Trump, as well as what we've seen in his speech the night of his victory, as well as the people he's selected as part of his transition, all of those things combined give me increasing hope that President-elect Trump is the very man who can lead us to that better future. Thank you."