The 2018 Senate Map Is Great, the Gubernatorial Map Not So Much 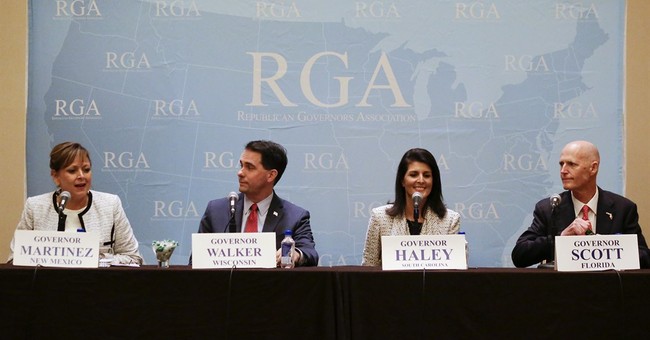 Much has been said about the upcoming Senate races in 2018. Of the 33 Senate seats in play, only eight are held by the Republicans, leaving abundant room for growth to the GOP.

The 2018 map of governor seats up for grabs is not as friendly for the Republican Party.

Twenty seven of the 38 gubernatorial seats up for election in 2017 and 2018 are currently held by Republicans, leaving the environment ripe for the Democratic Governors Association to go on the offensive.

A lot of these Republican-controlled seats include retiring governors who are concluding eight full years and are term limited. This means a lot of these GOP states will not enjoy the luxury that comes with incumbency while fending off challenges from the opposing party. Governors in Michigan, Ohio, Maine, New Jersey, Iowa, and Florida are some of the many outgoing Republicans who fit this bill. These are states that are either extremely competitive or are downright liberal bastions.

Will the RNC be able to recruit candidates similar to Susanna Martinez and Brian Sandoval - two Hispanic governors of New Mexico and Nevada (respectively) who have governed very successfully in states that have been trending blue at the federal level? Both states chose Clinton over Trump by formidable margins.

Ricky Snyder of Michigan and Chris Christie of New Jersey, having faced scandals during their tenure, will be leaving their blue states behind with low approval ratings. The Flint water crisis and Bridgegate will make it all the more difficult for the GOP to retain their seats.

Also, a few Republican governors elected for the first time in 2014 will be facing re-election in heavily Democratic states such as Bruce Rauner in Illinois, Larry Hogan in Maryland, and Charlie Baker in Massachusetts. The test will be whether these moderate Republicans can make magic happen twice in their respective states.

Governor Rauner was involved in a highly publicized fight with Illinois’ Democrat-controlled legislature over the state’s expenditures - leaving the state with no budget for a record breaking amount of time. The effort by Gov. Rauner was a testament to his willingess to stand up to big spending liberals, but proved deadly for his approval numbers.

Democrats have bemoaned for years that the GOP’s domination at the state level has been the main reason for their woes in the House of Representatives. They allege Democratic congressmen are at the mercy of districts mostly drawn by Republicans. They hope the 2018 map can change their predicament.

However, there are many reasons not to be dreadful of the gubernatorial map that lays ahead. Many Republican governors up for re-election in deep blue states are in fantastic standing. Larry Hogan of Maryland and Charlie Baker of Massachusetts have been topping the list of the most popular governors in the country.

Yes, governors John Kasich (R-OH), Rick Snyder (R-MI), Terry Brandstad (R-IA), and Rick Scott (R-FL) are vacating their seats, but they represent states that just recently voted for a Republican for president. These are the same states that have been faring even better for Republicans during mid-term elections (at least during the age of President Obama).

Governor Scott Walker is looking to run for a third-term in Wisconsin. He will also be the chair of the Republican Governors Association for 2017, laying the groundwork for the heavy burden ahead in 2018. He is certainly the man for the job. Governor Walker has repeatedly beat back union onslaught against him in his light-blue state, winning election three times in a four-year time period.

The RNC operation coming out of 2016 is impressive (thanks Reince Priebus) and will carry on to 2018 with a laser focus. The RNC is more up-to-date with GOTV technology and is implementing successful voter outreach methods. The Republican Governors Association has been described as the most efficient and successful campaign arm of the Republican Party. The GOP does well statewide.

Another point to add - analysts going into the 2014 mid-term elections believed the only direction Democratic governors could go was up. They had dismal numbers of gubernatorial control and were faced with another friendly map. It seemed plausible at the time that Democrats would gain seats that year.

It is uncertain how the fight for gubernatorial control will play out the next two years. It will undoubtedly be a tough road for the RGA. However, they’ve faced daunting environments before and have succeeded. It is important that they do.

We already have the 2020 Census to keep in mind.