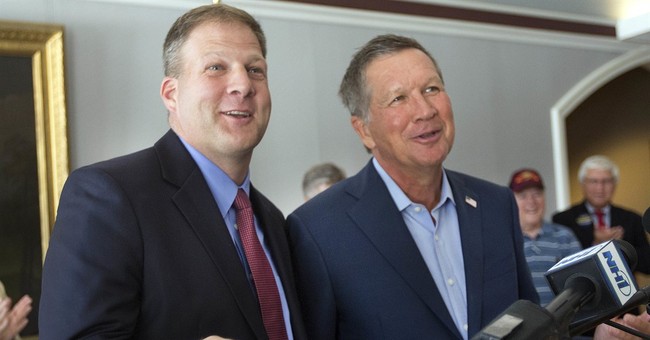 Update: Republican Chris Sununu has won the election to become the next governor of New Hampshire.

The race in the Granite State is another potential pickup opportunity for the Republican Governors Association as the Democrat incumbent is vacating her seat – and it’s a race that depends largely on Trump’s performance. Both the presidential and governor races in New Hampshire are uncomfortably close.

The candidates vying to be the next state’s chief executive are Republican Chris Sununu and Democrat Colin Van Ostern. Both have political experience and both are currently members of the New Hampshire Executive Council.

Republican Chris Sununu has one big advantage going into Election Day: family pedigree. His father, John H. Sununu, is a former governor, and his brother John. E. Sununu, is a former Senator. He entered the race with a surname already well known to New Hampshire voters. Along with the family name comes family expertise – he has run a well-oiled campaign with top talent navigating the rocky waters of a light-blue state.

Unlike his opponent, Democrat Van Ostern is more of a newcomer to the state – having arrived in 2001 to take a job as a political operative. However, he has since immersed himself into the New Hampshire political scene and a force to be reckoned with.

Despite polls being relatively close for much of the campaign, things have taken a recent turn in Sununu’s direction. The Real Clear Politics average is now +4.3 for Sununu. However, most still regard the election as anyone’s to win.