The Grossest Robocall of 2016 Is Upon Us 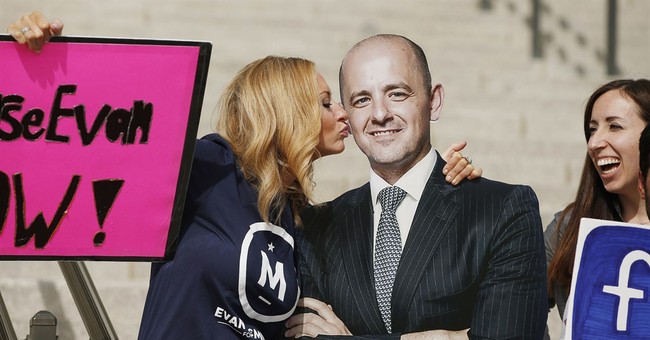 Thought the election couldn’t get any lower? Think again.

A well-known white nationalist, William Johnson, has paid for and recorded an anti-Evan McMullin robocall set to reach 193,000 landlines in Utah between Monday and Wednesday. In the disgusting phone ad, Johnson claims McMullin has “two lesbian moms” and is a “closet homosexual.”

When reached out for proof of the baseless claims he’s making, Johnson (leader of the American Freedom Party) says McMullin’s family story can be discerned from his Wikipedia page. He also defends himself by claiming that being “gay” is no longer a disparaging description.

Here is a transcript of the robocall and the recording below:

“Hello, My name is William Johnson. I am a farmer and a white nationalist. I make this call against Evan McMullin and in support of Donald Trump.

“Evan has two mommies. His mother is a lesbian, married to another woman. Evan is okay with that. Indeed Evan supports the Supreme Court ruling legalizing gay marriage.

“Evan is over 40 years old and is not married and doesn’t even have a girlfriend. I believe Evan is a closet homosexual.

“Don’t vote for Evan McMullin. Vote for Donald Trump. He will respect all women and be a president we can all be proud of.”

I've stood for liberty and equality in this race; it's natural for @realDonaldTrump's white supremacists to attack me. A fight worth having.

As you can see from the robocall, Johnson is an ardent supporter of Trump. This is also not the first time he’s made robocalls on Trump’s behalf. Johnson made robocalls in February telling voters not to support a "Cuban" - an obvious reference to Marco Rubio.

While this does not look good for the GOP nominee – no candidate can help who supports their campaign. Trump has repudiated Johnson's support by giving away the 250 dollars previously donated by him earlier on in the campaign. It would do him good to immediately repudiate this homophobic, disgusting ad, as well.

Utah is getting a lot of attention lately. While usually a solidly red state where not much attention is paid, McMullin is polling so strongly there that campaign resources have been directed to the Beehive State. The latest polls show McMullin with a strong shot at winning.