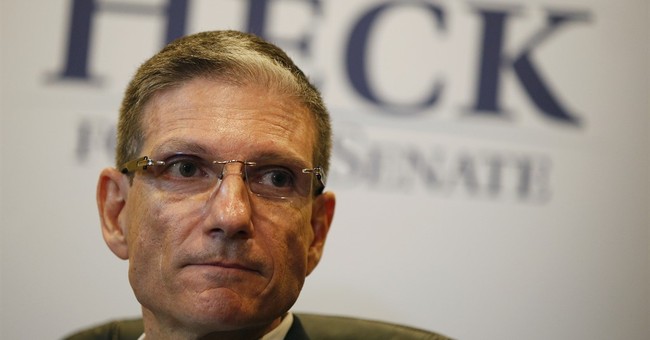 The fight for control of the Senate will come down to the wire. Unfortunately for the GOP this election year, almost the entire battle will be waged on home turf. A vast majority of the seats up for grabs are Republican-held.

However, there is an opportunity out West for the GOP to play offense. Congressman Joe Heck of Nevada is heading into the last leg of the 2016 Senate race with the advantage. The mix of polls show Heck’s lead over Democrat Cortez Masto to be moderate. The current RCP average has him up only by 2.2 percent, but what’s interesting to look at is that his lead has been consistent – polling ahead of Cortez Masto since the summer with no big fluctuations.

The cherry on top of this potential Senate seat pickup: it belongs to the retiring Senate Minority Leader Harry Reid. The GOP is gleeful at the prospect of taking Reid’s seat from the Democrats, especially after fumbling the opportunity to do so in 2010. The win can also give the GOP more cushion to bleed seats and still hold the Senate.

If you ask Nevada Democrats, though, they say the former attorney general of their state will win. How? Her supporters, without pointing to recent polls, say Nevada has too many Hispanics and Trump will turn them away, sinking Heck with him.

The “Trump will make Nevada blue because of Hispanics” argument doesn’t hold water when you examine the current polling trends. Heck isn’t performing well despite of Trump, he’s more likely polling well because of Trump. The latest polls have Trump beating Clinton in Nevada. Rasmussen even shows him out ahead by three points – almost outside the margin of error.

Heck is also building off the Trump lead with more support from Hispanics. Cortez Masto is only pulling 34 points ahead of Heck with Hispanics – 12 points less than Clinton’s lead against Trump.

The congressman from the southern Nevada swing district is also benefiting off more name recognition than his Democratic opponent.

In Masto's defense, Roll Call and Larry Sabato’s Crystal Ball still rate the race a “tossup.” Unlike his Republican colleagues, Senator Dean Heller and Governor Brian Sandoval, Heck has unabashedly gotten behind the Trump train. If the GOP nominee performs poorly later on, he may have an effect on the race.

In the meantime, I would be getting worried if I was a Nevada Democrat.