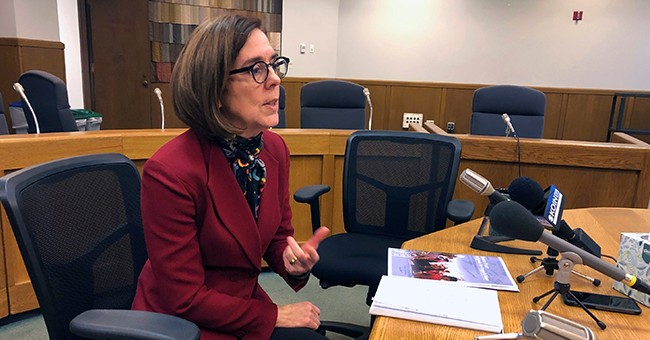 The Oregon State Senate passed a bill Tuesday that would bypass the Electoral College.

The legislators passed Senate Bill 870 in a 17-12 vote, which would make Oregon another state to join the National Popular Vote Compact. States under the compact agree to give their electoral votes to the candidate who wins the popular vote in the presidential election.

Oregon’s House of Representatives will vote on the bill next. If successful, it will then go to Democratic Governor Kate Brown to sign or veto it. According to Oregon Public Broadcasting, the governor’s office said Brown supports the bill.

“Those jurisdictions represent 189 Electoral College votes,” the Oregon Senate Majority Office wrote in a press release, “about 70 percent of those necessary to make the compact legally binding.”

One of the chief sponsors of the bill, Sen. Michael Dembrow (D-Portland), said that it was high time that Oregon joins the other states in the compact.

“One of the things I’m most proud of is how over the history of this country we’ve expanded the franchise and given voters more of a direct say in the election of our leaders,” he said. “Over time we’ve decided that it’s really important to have people have a direct say in the outcome of elections. We now have 14 other states and the District of Columbia in the compact, and it’s being considered in a number of different states. It’s way past time for Oregon to join them.”

Honored to co-carry the National Popular Vote bill with my colleague Sen. Boquist. Just passed the Senate on a 17-12 vote. On to the House! #orleg #orpol

Despite Republican Presidents George W. Bush and Donald Trump both winning the Electoral College vote, even though they lost the popular vote in their elections, Sen. Shemia Fagan (D) said that moving to a popular vote will be just as good for Republicans as Democrats.

“Since I have been eligible to vote, two of the three Presidents have been elected while losing the popular vote and this trend will only continue,” she said. “Republicans in Oregon have long complained that their votes don’t matter in the Presidential election. With a national popular vote, that sentiment is eliminated. All Oregon voters matter as much as any voter in Pennsylvania or Florida.”

But not everyone in the Senate was on board. Sen. Tim Knopp (R) said that Oregon’s vote would matter less in the presidential election if the bill becomes law. Knopp referenced a research paper from the Cato Institute, which found that over half of the country would lose influence in a direct election.

“Oregon is one of those 29 states that loses influence based on this research paper,” Knopp told legislators. “Not by a lot. By enough that we should have referred this to the people, because we should trust them when it comes to determining whether or not we’re going to change the way our votes are cast.”

Sen. Fred Girod (R) expressed the same concerns. He believed the decision for a direct election should have gone toward the people and that his fellow senators signed off whatever power Oregon had to the more influential states.

“The last thing I’d want to do is sign my future over to California and New York,” he said.