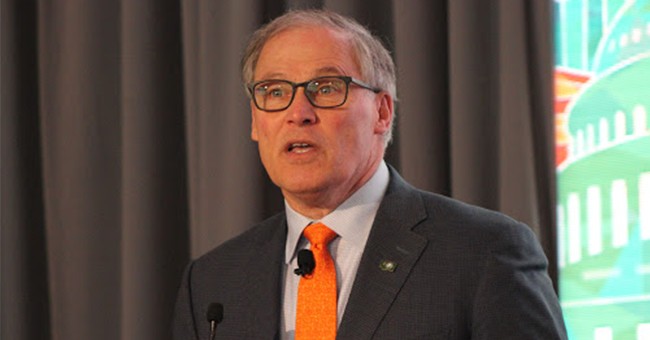 Greg Wetstone, president and CEO of the American Council on Renewable Energy (ACONE), asked Inslee about his stance on the controversial bill, despite its “complexity” and “lack of details.”

Inslee told Wetstone that the U.S. needs to make climate change the number one priority, and that bills like the Green New Deal help shape that view for Americans.

“I think the Green New Deal has been helpful in that effort in several ways,” Inslee answered. “Number one, it’s got people talking about climate change…Second, it has lifted people’s level of ambition…Third, it’s brought in so many new communities for discussion,” which he said includes people of color.

Inslee told attendees that he knew many people were concerned about the details of the bill, but he believes the road to completely clean energy is feasible. The governor showed lots of support for the Green New Deal two weeks prior on The View, when co-host Meghan McCain asked how the bill will affect Americans with its $51 trillion cost, removal of planes, cows and railways.

“It doesn’t seem that rational to me,” McCain said.

Inslee made the same comment about his car at the ACONE panel.

“I got in an argument with someone on The View, which shall remain nameless,” Inslee said drawing laughter from the audience.

The governor reiterated McCain’s comments, saying ,“’You guys want to take everybody’s car away.’ I said, ‘Well that’s interesting, because this morning I got a shiny blue General Motors all-electric Bolt charging in my driveway, made by American workers in Michigan.’”

Near the end of 2018, the U.S. sold one million plug-in electric cars, a fact that Inslee proudly shared at the panel. Over one million electric cars filled the streets in Europe the same year. But the Yale Environment 360 wrote that, “EVs still only accounted for 2 percent of all new car, van, and light truck sales in Europe.” And in the U.S., it took eight years for brands such as Tesla, General Motors, Nissan and Ford to reach their milestone of sold cars.

“The study adhered to the ‘20/4/10’ rule,” Bankrate wrote. “A 20 percent down payment, a four-year loan and principal/interest/insurance payments comprising 10 percent of a household’s gross income. If a median-income household follows those guidelines, they can afford less than half of the average new car price in six of the 25 surveyed markets.”

Though the EV industry is progressing at a slow pace, there is a rise in the renewable energy industry. In the U.S., California and Texas are leading other states in clean jobs. They currently hold 513,000 and 233,000 jobs respectively. In 2018, metropolitan areas like Chicago, Miami and Seattle saw double-digit percentage increases in solar energy jobs.

“Jobs in the clean energy sector are growing faster than rest of the economy,” Inslee said. “These are jobs for today, for a vision of tomorrow.”

Keynote speaker @GovInslee kicks off the #REPolicyForum with a hopeful message, “Jobs in the clean energy sector are growing faster than rest of the economy. These are jobs for today, for a vision of tomorrow.” #cleanjobs pic.twitter.com/waxLOJ7fYn

Inslee argued that the capitalist system can play a part in pioneering cleaner energy, but The Heritage Foundation said that some legislators favored intervening in the economy.

“Eager to frivolously waste more taxpayer dollars,” their late 2018 article states. “Some legislators are now pushing to extend the electric vehicle tax credit and lift the cap on the number of vehicles that qualify for the credit by each manufacturer. Doing so would reward special interests and only benefit the wealthiest Americans. Congress should instead eliminate the subsidies for electric vehicles.”

Heritage highlighted that such subsidies could increase purchases but would hurt businesses’ incentives to innovate in the interest of maintaining, “preferential treatment.”  They also said that, “The indirect costs are particularly burdensome on lower- and fixed-income families who can’t afford electric vehicles and take advantage of the subsidies.”

Inslee could also seem hypocritical in his support for the Green New Deal, as American Enterprise Institute resident fellow Alex Brill said that the bill would hurt green economic innovation.

“Brill writes that the Green New Deal's financing through bureaucratic funding schemes could ‘inhibit clean technology and energy efficiency innovation,’” The Washington Free Beacon explained. “Because grants will ‘inevitably be earmarked for investments that can be defined using only tools and technologies already at hand.’ Energy innovation in the private sector would also be inhibited as private companies would seek federal financing instead of private investment for green energy projects.”

If Inslee becomes the next president of the United States, he could end up walking a political tightrope, in which he might be pressured to fall either on the side of political intervention or economic progress. He could be forced to make a decision quickly if we are on the brink of destruction due to climate change like he suggests.

“We are the first generation to feel the sting of climate change and we are the last generation who can do something about it,” he said at the panel, echoing his campaign video.