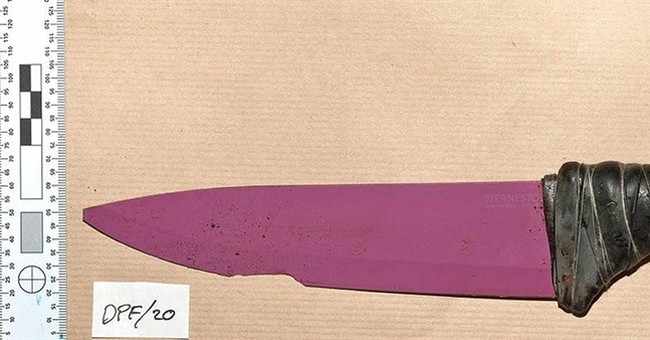 A UK lawmaker was roasted on Twitter for proposing that tracking systems be fitted to all knives sold in the country.

Conservative MP Johnny Mercer posted a video on the social media platform Thursday. He showcased a crudely made sign that read “Ministry of Good Ideas” before heading inside.

“So I’ve come down to this secret little place in parliament,” Mercer said jokingly. “Not many people know where it is, actually.”

WARNING- Some strong language used in this video.

I reveal a secret part of the Palace of Westminster you may not have seen before: the Ministry of Good Ideas. Guess who’s behind the desk.. pic.twitter.com/yEo4ObzdwO

Mercer then went inside to meet with North Cornwall MP Scott Mann, who was sitting down near an office desk. The video cuts to Mercer and Mann sitting next to each other as Mercer read out comments on Twitter.

“Scott, I think you need a GPS tracker fitted on your head.”

“There’s been a stabbing. Quick, get me a GPS tracking for every knife in a three-mile radius. Okay, it says there are 120,000 of them, mostly in kitchens.”

“Why stop with the knives? Let’s install GPS trackers on every fork.”

Mann giggled along with Mercer. “I’m glad we can laugh about it,” he said.

Mann’s proposal to have a national database for knives, which he tweeted hours before Mercer made his video, comes at a time where stabbings in the UK reached a nine-year high in 2018. BBC reported that there were, “a total of 21,484 offences in England and Wales,” related to knives and other weapons. Gun regulations are incredibly strict in the country.

Every knife sold in the UK should have a gps tracker fitted in the handle. It’s time we had a national database like we do with guns. If you’re carrying it around you had better have a bloody good explanation, obvious exemptions for fishing etc.

But after facing backlash from comments on his feed, even Mann admitted that his proposal was a, "s*** idea."

Bad idea, serious problem. Here's a read through of the replies. https://t.co/LWNZame5l3

Despite the bad idea, Mann still stands by his belief that something needs to be done to oversee and regulate knife ownership.

“Ultimately, we have a problem,” Mann told Mercer in the video. “And no one is coming up with any solutions.”