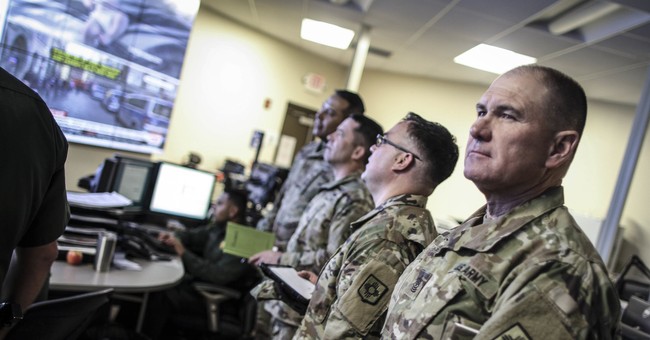 Commanders at the Army National Guard are worried that 330,000 citizen soldiers will struggle to meet their new fitness standards, according to the Associated Press Tuesday.

Lt. Col. Brian Dean is working to get the Guard transitioned to the new fitness test. He told AP that “it’s a concern” that the new fitness standards could drive many soldiers out of the National Guard.

“For those who are already doing well on their physical fitness test and they have the routine figured out, I think they’re going to transition to this new test without any issues,” Dean said. “People who are in those parts of their life where they’re still kinda struggling to make the right time for fitness and do fitness in the right ways — this will feel significant.”

Many soldiers in the National Guard are made up of regular citizens; working part time to protect their communities, be available during natural disasters, and provide assistance to active-duty military forces. Many members work regular jobs or attend school while serving.

“Ninety percent of my soldiers are part-time,” Maj. Gen. Timothy Orr of the Iowa National Guard told AP. “I think there’s apprehension. There’s always the question of how are we going to do this with the time that we have, and the equipment we have.”

Originally, the fitness test required soldiers to do two minutes of push-ups, sit-ups and a two-mile run. The new test, which will be implemented Oct. 1, 2020, will last an hour and make use of a sled-drag, a deadlift, and include many other exercises; all on top of a push-up and two-mile running evaluation.

Orr said that he’s still unsure how the new fitness requirements will treat soldiers with physical limitations. Currently, alternate testing is available to those members, such as a swimming test for people who can’t do a two-mile run. But despite the uncertainty, Orr told AP that he’s confident the Guard will be able to take on the new challenges.

“I think we have committed troops today, committed leaders, and folks will step up to the challenge,” Orr said. “There may be select individuals that will say, ‘Hey, I’ve had enough and I want to leave.’ But I think we’re a professional Army and this is just another of the many challenges we’ve had, especially over the last 18 years.”

Dean said the National Guard is already working to prepare for the upcoming test. The Guard will hire 5,000 fitness instructors and purchase $40 million worth of equipment in the next seven months. Dean said they want soldiers properly trained to use equipment like deadlifts before the test so that they don’t injure themselves.

BREAKING: Chavin GUILTY on ALL Counts