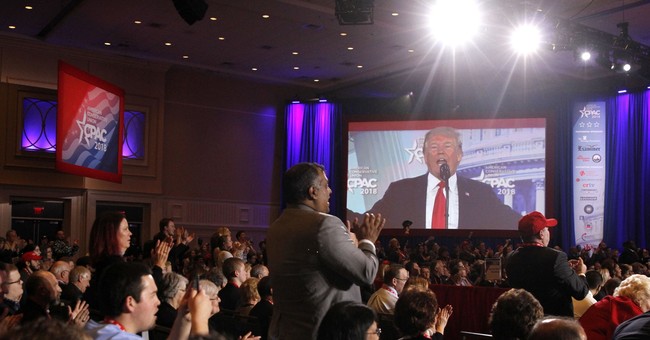 In a phone conference Monday, Chairman Matt Schlapp and Executive Director Dan Schneider of the American Conservative Union (ACU) gave hints as to what we can expect at CPAC 2019.

This year could turn out to have the largest number of participants in CPAC’s history. Schneider said that they believe about 10,000 people will attend the conference, but for the first time, the convention will make use of “satellite stages” at two new universities to cover the event live. These include Liberty University in Lynchburg, VA and Pepperdine University in Malibu, CA. CPAC made use of a satellite stage at Colorado Christian University in Denver last year.

“We had Michelle Malkin from Colorado Christian University and a debate on marijuana legalization that occurred on CCU stage, and was broadcast to main stage of CPAC,” Ian Walters, communications director at ACU, told Townhall. “It worked so well we decided to expand the effort by adding Pepperdine University and Liberty University for this year’s event.”

With two new satellite stages, CPAC may end up having a lot more people participate in this year’s event, even if they’re not physically present in Maryland.

Schlapp revealed that the theme of this year’s CPAC is “What makes America Great?”

While the years under the Obama administration caused the country to lose ground, Schlapp said that President Donald Trump has been able to bring the country back on track. CPAC plans to answer some basic questions about the fundamentals and values that make America good for people and exceptional compared to other countries in the world.

Schlapp said that the convention also hopes to identify what harms America. He talked about the dangers of socialism and proposed that the Democrat party should be “appropriately called the socialist-democrat party.” He believes that the party’s recent turn to “craziness” is the greatest gift that conservatives have right now, but fears the dangers their extremism could pose a threat in this politically-split nation.

“Socialism is becoming a popular thing among people who don’t understand what it means,” Schneider added.

While there are plenty of big-name conservative speakers this year, one of the figures that at first wasn't confirmed for CPAC was President Donald Trump. The president left the U.S. Monday to attend a second summit in Vietnam with North Korean dictator Kim Jong Un. Trump said he hopes to discuss the possibility of denuclearization.

Schlapp said that some of the empty “to be determined” spots in the schedule are meant to give Trump space in case he is able to attend. But Schlapp and the rest of CPAC agreed that his meeting with Kim Jong Un should be a priority.

“We think that’s a very important mission,” he said.

But just recently, Schlapp tweeted that the president will be attending this year's CPAC.

We are honored to have @realDonaldTrump join us again for #CPAC2019 where he'll share his vision for #WhatMakesAmericaGreat. Thank you, Mr. President! pic.twitter.com/NpV3dqkew5

CPAC, the Conservative Political Action Conference, is the biggest yearly gathering of conservative minds and voters. This year’s convention will be held in National Harbor, MD from Feb. 27 to Mar. 2. Speakers confirmed for CPAC 2019 besides Trump include Sen. Lindsey Graham (R-SC), Mark Levin, Glenn Beck of The Blaze, Judge Jeanie Pirro of Fox News and Townhall’s own Katie Pavlich.