The Pentagon Has a Plan for the Zombie Apocalypse -- Seriously 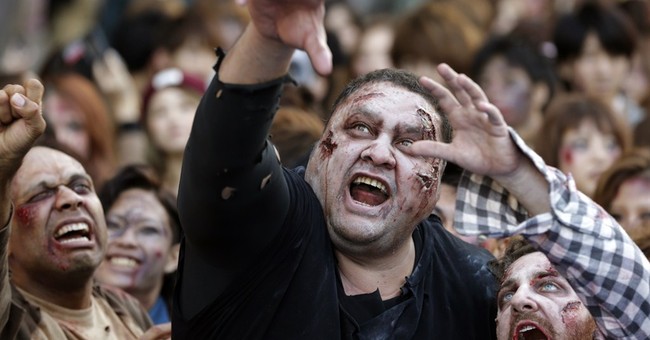 I am guessing this story may attract several fans of the popular TV show, The Walking Dead. Well, I can’t say I am not a fan! All may find it interesting to see that the U.S. military currently has a blueprint for what to do if zombies were to attack and the armed forces needed to put them down.

Foreign Policy has obtained an unclassified document from the military’s secret computer network called “CONOP 8888” that is basically a zombie survival plan. This how-to guide for military planners tries to isolate the threat of anything from chicken to vegetarian or even “evil magic zombies.”

"This plan fulfills fictional contingency planning guidance tasking for U.S. Strategic Command to develop a comprehensive [plan] to undertake military operations to preserve 'non-zombie' humans from the threats posed by a zombie horde," CONOP 8888's plan summary reads. "Because zombies pose a threat to all non-zombie human life, [Strategic Command] will be prepared to preserve the sanctity of human life and conduct operations in support of any human population -- including traditional adversaries."

The authors of the plan make sure to note in the disclaimer section that “this plan was not actually designed as a joke.”

Apparently the planners were looking for a creative way to make a planning document that would protect Americans in the event of an attack of any kind. Zombies were their muse.

A spokeswoman for Strategic Command made sure to explain that this plan is only a creative endeavor for training purposes. “The document is identified as a training tool used in an in-house training exercise where students learn about the basic concepts of military plans and order development through a fictional training scenario.”

Although this is all in good fun, it seems awfully silly and quite honestly a bit of a waste of our tax dollars. But for all of us zombie-related fans, this is pretty darn exciting.