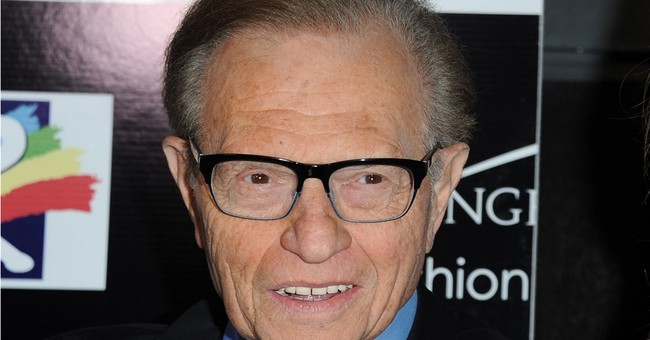 Larry King and his suspenders have been in the media business for 57 years, but it appears with his age, he has missed the changing of the guard. Apparently in all of his years in media he has never witnessed bias.

"I worked at CNN for almost 26 years. I worked in Mutual Radio for 20 years. I've been in the business 57 years. I have never seen a bias off the air or on," King told "The Steve Malzberg Show" on Newsmax TV.

"I've never seen anyone say, let's go get this person today, let's really ram it into him. I've never seen it. If a Democrat or Republican commits some horrendous story, the story will run, the networks will cover it."

"I have never seen anyone at CNN ever say, boy, here's how we're going to deal with this today to put this guy down and elevate this guy up. I've never seen it,"

Apparently this was even the case during coverage of political events. He stated, “I’ve covered every convention since 1960. I’ve never gone to a convention with a built-in bias…It’s the truth. It’s not a feeling. It’s not an opinion…It’s my experience.”

Well I guess according to King, CNN is the only honorable network out there. He claims that Fox and MSNBC are obvious about their bias and they are just preaching to the choir. King also made sure to point out that CNN has lost viewers since he left the network. He is not afraid of giving them a plug even though he no longer works for them.

Many studies have been done and bias is clear, whether it is on the right or left. No one is exempt, even CNN Mr. King!