Biden's New Press Sec Is Just Not Very Good at This 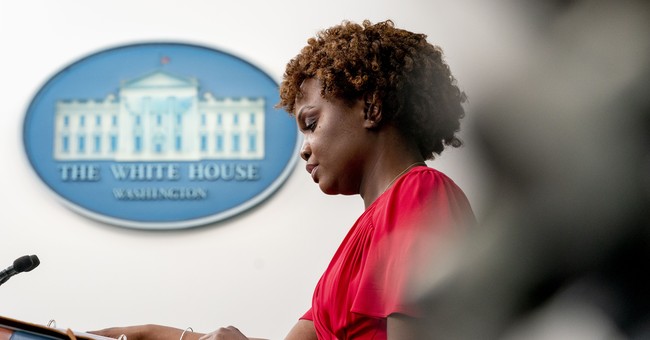 I really, truly don't want to be unkind.  Karine Jean-Pierre seems like a nice person who is doing her best in a challenging job -- made all the more more challenging by various failures rooted in decisions being made well above her head.  It's her job to speak on behalf of a president who doesn't speak well on his own behalf, who rarely gives interviews, and is deeply unpopular with the electorate.  That's a tough gig, period.  That said, its been rough sledding behind the podium since day one, and it hasn't really gotten better.  As I said on the radio, it's not personal.  It's an accurate, if subjective, assessment of her job performance:

Whether it's fielding straightforward questions in the briefing room, or conducting friendly interviews on friendly shows on friendly networks, KJP just doesn't seem to be equipped or terribly well-prepared to do the job well.  Maybe she'll improve over time, but it's been a minute.  She stammers. She reads verbatim answers from her binder, and not terribly smoothly at that.  Her phrasing sometime suggests that she doesn't really understand the basics of what she's talking about, including this painful appeal to oil companies' "patriotism" in the White House's latest desperate, scapegoating gambit:

Magically increase your refining capacity overnight despite Biden as a Senator, VP and President opposing every policy that would've increased refining capacity. Because pATriOtiSm. Like, what. https://t.co/55OINzhglO

"Do the capacity," gang.  Yeesh.  She also claimed the administration has "done our part" on energy production.  What on earth is she talking about?  Now, some of this is not her fault.  Messaging decisions are made by others, then she's rolled out to say things like Americans are 'well-positioned' economically, thanks to Biden's "historic gains."  Yeah, about all that:

A large majority of voters say the economy is in bad shape. Two-thirds are pessimistic about conditions. Gas and grocery prices are a major problem for most families. And a growing number of voters feel they are losing ground financially.  That’s the grim backdrop for the upcoming midterm elections, according to the latest Fox News national survey.  Forty-seven percent feel they are falling behind financially, up 20 points compared to last June. Eight-two percent of voters rate the economy negatively, including 57% who describe it as poor -- the highest in a decade. When asked to offer a more general assessment of their economic mood, 65% say they feel pessimistic. That’s an 18-point increase since last year, and up 30 points from four years ago. Nine in 10 report the cost of food and gas are a problem for their family. That includes majorities who say current grocery (55%) and gas prices (67%) are a "major" problem. For voters in households earning less than $50,000 annually, nearly three-quarters call gas prices a major problem (72%).  And by a 50-32% margin, more voters say President Biden’s policies are responsible for current gas prices than blame Russian President Putin’s war with Ukraine.

In that national survey, the GOP leads by 19 points on the issue of handling inflation, with Republicans ahead on the generic 2022 ballot by three points.  Biden himself said last week that the US economy is the fastest-growing economy "in the world, the world, the world."  Not even close.  American GDP contracted last quarter, and the next quarter isn't exactly looking gangbusters either:

He's also claimed that inflation is worse everywhere else, which is flagrantly false, as well.  Add this all up and the economy is in a "better place than it has been historically," KJP informs us.  Let the good times roll.  Amazing.  Who's writing that line in her binder?  I'll leave you with this, on which I'm willing to cut Biden a break:

In fairness, it’s an unwieldy acronym they keeps getting longer. Could we just say ‘not straight’ & call it a day? https://t.co/fGHVeE5tcD