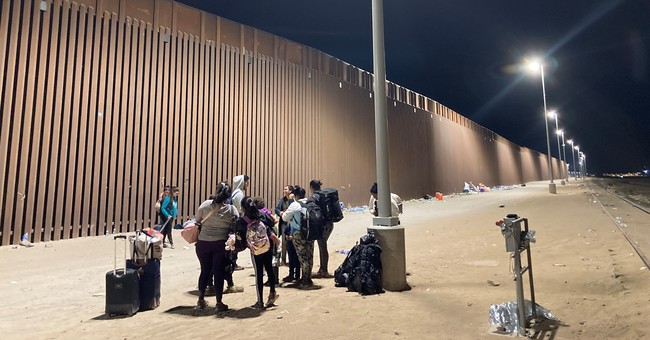 McAllen, TEXAS – At the same White House press briefing at which she deflected border crisis blame onto the Texas state government this week, outgoing Biden press secretary Jen Psaki also repeated a variation of a familiar Democratic talking point about the alleged ineffectiveness of border walls. Here is what she said, a claim so facially ridiculous that even anxious, re-election-minded Democrats have started chirping about building additional "barriers" – apparently hoping that voters will forget about their anti-wall track records developed over years:

PSAKI: "The former president invested billions of dollars in a border wall that was never going to work or be effective..."

Border Patrol has been begging for more walls and barriers for years because they work. Nobody has argued that constructing walls is a silver bullet that will fix a complex and entrenched problem, but they are undeniably helpful tools that help deter or slow illegal crossings – especially when paired with sound policy. The Biden administration is opposed to the former and is failing disastrously on the latter front, a dreadful combination that explains the current, acute crisis. Over the course of our reporting trip to the border, law enforcement and military officials deployed by Texas to help mitigate the crisis have repeatedly stressed the importance of physical barriers. One example of many:

A privately-funded (!) wall along another stretch of the river. Officials tell us it’s a strong deterrent in this area, reducing crossings by 90%+ and funneling illegal immigrants elsewhere, making patrols more effective. WH repeated the ‘walls don’t work’ canard yesterday. pic.twitter.com/umJVkCqnik

Texas Department of Public Safety (DPS) officer Lt. Chris Olivarez, who has served in law enforcement along the border for decades, responded Tuesday to Psaki and others who are "making those inaccurate statements [that] barriers do not work":

"They need to get to the border and visit with the men and women that are on these front lines that can tell them firsthand that barriers, fencing, walls do work. It does help them in their job. And we've seen it firsthand. You've got to see it firsthand by visiting the border as well. So when you have a barrier in place, whether it be a chain link fence, a wall, it helps divert some of that criminal activity to other areas where we can plug in those gaps, either by having the National Guard soldier on point or even technology having cameras. But walls are very vital to border security, and border patrol agents can tell you that. They've been saying that for numerous years, and that's why Governor Abbott last year stepped in, because government the federal government failed to -- they've canceled those border wall contracts. And that's why he stepped in, took that initiative and took unprecedented action by actually building the first ever Texas border wall. And in addition to that, also having other barriers in place, chained fencing, and also the wire, which is that seawall that you saw along the river this morning. So we're putting those barriers in place."

Olivarez also discussed the influence of the Mexican drug cartels, which control illegal border crossings. It's a massively lucrative and organized human trafficking and smuggling business. We witnessed evidence of that phenomenon firsthand here yesterday:

We are at one of countless landing spots on the US side of the Rio Grande. Wristbands are evidence of a vast human smuggling business dominated by drug cartels. It’s very organized & lucrative for criminals. Illegal immigrants shed bracelets upon entering the US. #BorderCrisis pic.twitter.com/PZTMybbqJM

Texas law enforcement official who gave us this $ estimate had to repeat himself. Per *week* — and that’s based on last year’s information. This year will be worse, likely much worse. https://t.co/OuPY1wITUC

We had Sen. John Cornyn on the same show, who called the aforementioned White House response to the recent drowning death of Specialist Bishop Evans "despicable." He also noted that he and Sen. Kyrsten Sinema, a border state Democrat, recently teamed up with bipartisan counterparts in the House to offer border solution legislation. The Biden administration has shown "no interest" in the proposal, he said. Consider that point as you watch the longer version of the Psaki clip above. She claimed that the administration is eager to discuss "smart" solutions on this issue set with governors and others. But in reality, they've stiff-armed a bipartisan effort in Congress, per Cornyn, and also rejected a ten-point plan offered by ten governors last year. Here's Gov. Abbott amplifying the point that Olivarez made in the above interview:

None of this is work I, nor any other governor, should be forced to undertake. This is President Biden’s job; yet he refuses to do it. Under the previous administration our border was the most secure it has been in years, but one of the first things President Biden did when he was sworn in was to open the floodgates to illegal immigration. That is why I am now sending buses of illegal aliens we round up in Texas and dropping them off in Washington, D.C. It may be difficult for the White House and Congress to comprehend the true scope of the illegal immigration crisis if they do not see it first-hand. So, I am bringing the border to them. To be clear, in Joe Biden’s America, every state is a border state, and until we secure our southern border, deadly drugs, rising crime, and illegal immigrants will flow up from our border into states all across this country.

McConnell: GOP will demand a vote to reinstate Title 42 on something, most likely, coronavirus aid. Democrats are divided on the administration’s decision to end the Trump-era policy and Republicans think they’ll have enough Dem support to get an amendment through the Senate.

My guess is all 50 Democratic senators won't unanimously vote no again, as they all did last year. The pandemic has improved since. What has not: Their electoral prospects.

What Liberals Get Wrong About the Second Amendment
Townhall
Rep. Lauren Boebert informs Rep. Eric Swalwell that no, he can't date her
Twitchy
Heartbreak at MSNBC as Joy Reid's 'ReidOut' Crashes and Burns in Ratings Wars
Redstate
What's Going On with the Highland Park Killer's Parents?
PJ Media