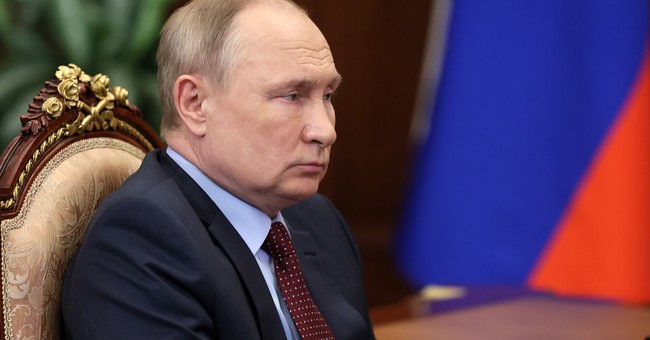 Genuinely good news, or hopeful wartime propaganda? Both are plausible explanations for this Times of London report, which purportedly cites an unnamed Russian intelligence officer's assessment that the Kremlin's war against Ukraine will end in complete disaster. In fairness, it may not take a secret plugged-in source to reach that conclusion. Putin's invasion has been inept and extremely costly thus far, though precise losses and death tolls are unreliable. And even if military "victory" is ultimately achieved – thanks in large measure to brutal war crimes and terrorizing civilians – then what? In the largest Ukrainian city taken by Russia thus far, the occupation isn't going well, as brave Ukrainians have made abundantly clear that enemy forces will never be welcome. The "self-pacification"/"greeted as liberators" delusion has come crashing down in real-time. What's the endgame? The general thrust of this alleged internal analysis rings true:

Spies in Russia’s infamous security apparatus were kept in the dark about President Putin’s plan to invade Ukraine, according to a whistleblower who described the war as a “total failure” that could be compared only to the collapse of Nazi Germany. A report thought to be by an analyst in the FSB, the successor agency to the KGB, said that the Russian dead could already number 10,000. The Russian defence ministry has acknowledged the deaths of only 498 of its soldiers in Ukraine. The report said the FSB was being blamed for the failure of the invasion but had been given no warning of it and was unprepared to deal with the effects of crippling sanctions.

The New York Times offers a snapshot of Ukrainian resistance and Russian foundering:

For three days, Russian forces had fought to take Mykolaiv, but by Sunday, Ukrainian troops had driven them back from the city limits and retaken the airport, halting the Russian advance along the Black Sea, at least temporarily. By Monday morning Russian forces had resumed their attack...Russia’s failure to seize Mykolaiv and other cities quickly, as President Vladimir V. Putin of Russia appears to have intended, is largely a function of its military’s faltering performance. Russian forces have suffered from logistical snafus, baffling tactical decisions and low morale. But it is the fierce and, according to many analysts, unexpectedly capable defense by Ukrainian forces, who are significantly outgunned, that has largely stalled the Russian advance and, for now, prevented Mykolaiv from falling into Russian hands.

The "total failure" forecast seems realistic. Then again, I'm skeptical, because some of these developments seem a little too on the nose. Some experts think it's authentic. I'll remind you that same newspaper published a story last week claiming that anti-war elements of Russia's FSB intelligence service had helped Ukrainian President Volodymyr Zelensky evade three separate assassination attempts in recent days (in one case, the assassination squad was "eliminated," according to Kyiv). If all of this is true, Putin's panic must be spiraling. If it's just an invented, morale-boosting salvo in the information war – which Ukraine has been winning globally, in a rout – then it's likely being greeted with more of a shrug inside the Kremlin. Is it possible that figures within the Russian security apparatus are surreptitiously aiding the enemy, in protest of their own regime's actions? Yes. Is it also, or alternatively, possible that the intel is flowing through the United States and its allies? Very much so. I'm reminded of this NBC News report from late February:

Western intelligence agencies have good visibility into Putin right now and are closely watching his moves for any significant behavioral changes, several current and former officials said. Four U.S. officials said there is no intelligence saying he is mentally unstable, but they said he has displayed a different pattern of behavior from in the past. The U.S. has solid intelligence that Putin is frustrated and directing unusual bursts of anger at people in his inner circle over the state of the military campaign and the worldwide condemnation of his actions, one former and two current U.S. officials briefed on the intelligence said. That is unusual, they say, because Putin, a former intelligence officer, usually keeps his emotions in check.

Do we have a spy close to the Russian dictator? Or have other intelligence-gathering methods so thoroughly penetrated the upper echelons of the Russian government that we have such "good visibility" into what's happening? It's easy to believe that these sorts of claims are mostly psyops designed to rattle Putin. But...Western intelligence has been largely vindicated throughout this war, especially during the build-up to it. Maybe his inner circle really is compromised one way or the other. But while there are reasons for optimism, pro-Ukrainian triumphalism would be a mistake. The Russians are ruthlessly shelling cities, obviously unconcerned by the prospect of major civilian casualties. And they've made some progress:

But the information environment in Ukraine may be too optimistic.

Bill Roggio, of @FDD and @LongWarJournal, warns that the situation is precarious AT BEST, and that if the Russians grind it out, things will be a lot more dire for Kyiv: https://t.co/f6xhx41y8J

On February 24, legendary Georgian pop singer Valery Meladze warned that "history will judge everything," and called on Russia to stop the invasion of Ukraine.

His concert in Minsk, due to be held later this month, was immediately canceled. pic.twitter.com/aC0OhRaggQ

Of course, desperation flows both ways:

And coming full circle to the "total failure" assessment above, I'll leave you with more optimistic news, nearly two weeks into this nightmare:

Russian convoy continues to be stalled, official told NPR's Tom Bowman, adding they do not assess an amphibious invasion is imminent near Odessa.

If the Russians continued to be stymied and humiliated, will their leader's preposterous and unacceptable ceasefire demands become less unreasonable?

Four Out-of-state Billionaires Trying to Buy a US Senate Seat in Arizona for Trainwreck Blake Masters
Townhall
City of Orlando dumps on the 4th of July, then tries to walk it back
Twitchy
DeSantis Fires Back After Gavin Newsom's Pathetic Anti-Florida Ad Is Revealed
Redstate
Five Tips on How to Have Fun AND Annoy Your Commie Neighbors on the 4th of July
PJ Media