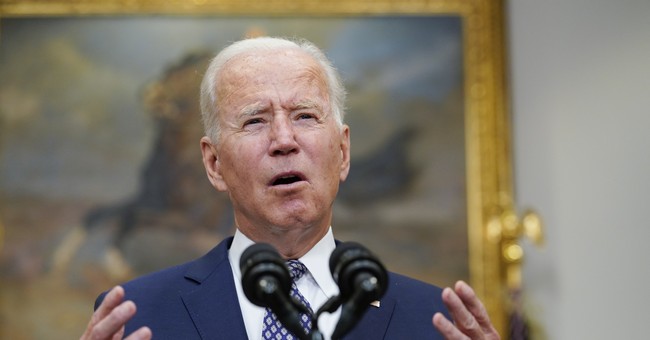 We'll get to the USA Today/Suffolk survey below, and it's especially gruesome politically for the White House -- but before we do, here's a quick round-up of the new data from NBC and CBS' pollsters.  We ran through some of the Afghanistan-related numbers in this post, but it's worth flagging some additional data.  Biden's approval has slipped considerably on core issues like COVID and the economy.  These are some dramatic swings:

It's not his 25% approval on Afghanistan where Biden is taking a hit either:

Key tab: 29 percent of Americans think the country is headed in the right direction, which is down 7 points from the last survey. https://t.co/MyITt6IGEL

A CBS News/YouGov poll finds that Americans no longer believe Biden to be competent, focused, or effective as president. pic.twitter.com/bUa5hcxWWd

NBC News poll: “35 percent of Americans say the Covid relief legislation that was passed in March is helping improve the economy or will do so in the future, versus 38 percent who believe it won’t help or will hurt the economy” https://t.co/CGR5kcTDwS

No wonder some elections analysts are saying Republicans' prospects for 2022 are improving:

Across more than 30 special state legislative and federal elections during the Biden presidency, Republicans are doing 4 points better on average than former President Donald Trump did in these same districts last year...Either way you look at it, there has been a slight Republican overperformance compared to where things stood last year...But this would likely be enough for Republicans to take back the US House of Representatives, especially considering that they are in a good position for redistricting. What really jumps out, though, is the trend...Whether such a shift sustains itself can't be known at this point. Things may shift back to Democrats. It shouldn't be too surprising if the Republican overperformance does hold. Back in 2009, there was a big movement away from Democrats in special elections toward the middle of the year. This foretold Republicans doing very well in the 2010 midterms.

And now we have the fresh USA Today/Suffolk poll that is brutal for Biden. It's a bit of an outlier for now, but the trends align with the other data reviewed above:

For President Joe Biden, the cost of the war's chaotic end has been steep. His overall job approval rating now stands at 41% who approve versus 55% who disapprove – a big drop in the closely watched barometer of political health. Until last week, national polls generally showed his approval rating above 50%. Now, while he has held the backing of 87% of Democrats, only 32% of independents say he's doing a good job...The poll was taken Thursday through Monday, when the nation's headlines were dominated by scenes of desperate families trying to evacuate the Kabul airport and a surge of COVID-19 cases across the United States. Half approved of his handling of the pandemic, 39% of his handling of the economy, 26% of his handling of the Afghan withdrawal...Biden's decision to pull out troops was backed by most Americans, 53%-38%. But almost two-thirds, 62%, disapproved of the way his administration has handled that withdrawal.

Underwater by 14 points on approval is pretty grave for a president whose overall approval rating had been very stable for months.  The collapse among independents is serious, and it's cutting into his previously-strong marks on COVID and the economy (which we also saw in the NBC and CBS data sets).  The last line of the excerpt above clearly illustrates why Biden is so eager to make the Afghanistan debate about his initial yes/no decision, not the execution of that decision.  Democrats are right to be very nervous about the midterms.  The bad news for them is clear.  The good news is that the election is next November, not this November.  They have time and space to rebound.  Or, of course, their political fortunes could deteriorate further.  I'll leave you with a clip of some analysis of these numbers: