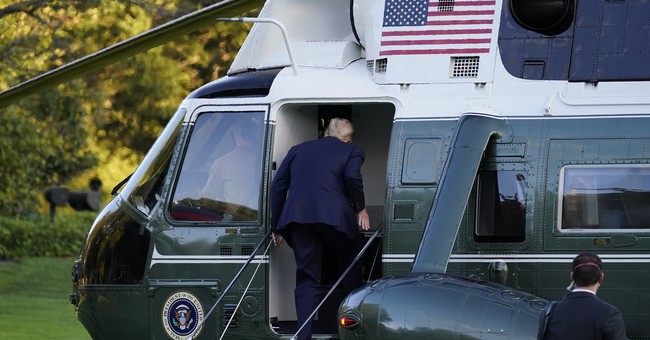 My initial headline was, 'is Trump trying to lose?'  Of course he's not, but one could be forgiven for raising the question over the past few days.  A snapshot of where things stand, roughly four weeks out from the election: The national polling average, which was within 1.1 percentage points of being accurate in 2016, gives Joe Biden a nine point lead.  Of the last ten nationwide surveys, four of them peg the incumbent's deficit in the double digits.  Trump could conceivably lose the popular vote by a small handful of points, thread the electoral college needle again, and win.  He cannot, however, lose the national vote by mid-single-digits, let alone double digits, and win a second term.  He's not out of it yet, but this election's dynamics are markedly different from the scenario that set the scene for his epic upset four years ago.  And based on the data and trends, he is in very serious trouble right now:

There are good reasons, after 2016 & 2018, to proceed with great caution in calling this race with weeks to go; doubly so in the unpredictable circumstances of 2020. But it takes a lot of whistling past the graveyard to ignore how much trouble Trump is in. https://t.co/Uo66xQMOVH

These 10 bellwether counties — five in Sun Belt battlegrounds, five in the Frost Belt (loosely defined to include Iowa) — could point us toward each state’s winner. They run the gamut from meatpacking hubs to white-collar office parks, and from peach orchards to yacht-dense retiree havens. But there is something they all have in common: Their votes will matter a lot...Conversely, Mr. Trump would likely need to win at least eight of those 10 states for a second term. A look at these bellwethers — all either tossups or leaning toward Mr. Biden — makes clear that Mr. Trump is in serious trouble.

Against that backdrop, Trump has now (thankfully) survived a COVID hospitalization, with much of his top team also testing positive.  Polls show that overwhelming majorities of Americans (a) support robust mask use and even mandates, and (b) don't believe the president has taken the virus seriously enough.  His approval on handling the overall issue is deep underwater, as it has been since May.  After being discharged from the hospital, Trump defiantly removed his mask before walking into the White House (where staffers were waiting for him), told Americans not to fear the virus (many people should fear it and take active steps to avoid contracting it), and mused that he might be immune -- while still actively infected and contagious.  Even if you believe all of that was exactly the right thing to do, the fact is that most voters do not agree.  And COVID is a defining issue of this campaign.  The next day, he reprised one of his worst talking points:

This "flu" talking point was dumb enough when only a handful of Americans had died from Covid-19. Now, it's even worse. Fact is, over the last decade, flu deaths have averaged 36k and the worst year it killed 61k. COVID has already killed more than flu did in past 5 yrs combined. https://t.co/jTLijddIzF

Recall that Trump is on tape telling Bob Woodward that COVID is much deadlier than the flu back in February.  He was right then, which made some of his subsequent downplaying so problematic in many voters' eyes.  And now he's circling back to it.  Yes, it's true that improved treatments and therapeutics have mitigated its lethality.  It's true that there has been major, unprecedented progress on vaccines (for which the Trump administration deserves credit, and Democrats deserve scorn for sowing unscientific doubts on this front).  And it's true that we shouldn't overreact with harmful lockdowns, or cripple sound public policy-making with irrational fear.  But voters very obviously want their president to attain a basic baseline of concern and consistency that Trump has failed to meet.  It's almost as if his triumphalist tone and apparent refusal to alter failed COVID protocols are designed to convince wavering voters of his unfitness and inability to learn or improve.

And then there was his mind-boggling decision yesterday to walk away from COVID relief talks.  He's not wrong about the bad faith of House Speaker Nancy Pelosi, who has literally said out loud that she'd rather see struggling Americans get no assistance than get assistance that isn't quite to her personal liking.  And he's not wrong to totally reject the bill she passed out of the House months ago, which was widely dismissed in the political press as an unrealistic messaging document laden with unrelated poison pills.  I'd also point out that if a multimillionaire, oversized pearl necklace-wearing, illegal blowout-receiving Republican Speaker were taking this line under these circumstances, the 'Cruella De Vil' press treatment would be laid on thick.  Pelosi has received some pressure from rank-and-file members to strike a bipartisan deal, but the outrage has generally been muted.

But for the president to walk away from the table at this stage of the election season, with so many Americans in dire need of help, is inexplicable on multiple levels.  It's totally possible that Democratic leaders had already decided they had zero intention of giving Trump a 'win' this close to the election.  Sorry, suffering Americans.  Or maybe there was a potential deal to be had, pending additional concessions from each side (the White House had already made quite a few).  But even if a deal wasn't truly in the offing, the play is to at least make it as politically painful as possible for the opposition to keep saying no.  Advance and announce a steady stream of offers for them to reject.  Force Senate Democrats to mount another filibuster.  Do everything possible to demonstrate to voters that you're trying, and the other side is deeply committed to Pelosi's "our way, or you get nothing" attitude.  This at least gives down-ballot Republicans a fighting chance.

By very publicly pulling the plug and abandoning the issue until after the election, Trump essentially wrote Democrats' talking points for them.  He's practically holding up a giant sign that reads, "blame me."  There is no leverage play here.  It's just a major announcement that he, not the other side, is plunging a dagger into COVID relief.  Why?  'No deal' will harm lots of people and businesses, and the prospect of achieving deal is very popular.  Again, Trump is spending the first week of October planting his feet on the wrong side of approximately 70/30 issues -- while already trailing:

The economy is the *one* issue that voters think the president has handled really well, and here they forfeit a golden opportunity to not only turn the conversation back to it, but add a popular bipartisan accomplishment. It's wild, at least from a political standpoint

Literally goes all in on his two most unpopular positions with less than a month go to before the election pic.twitter.com/nMcDdEnXFm

Republican Congressional leaders are putting on the bravest face they can, but they're left with very thin gruel on the COVID relief issue.  Of course, with the markets falling off a cliff after the president's tweets yesterday, perhaps he can be persuaded to reverse himself on this issue.  I started thinking last night about how it's still a salvageable error.  He could tweet something about his strong leadership that showed his willingness to abandon the talks made the involved parties all the more serious about hammering something out, and therefore he's instructed his team of negotiators to come back with another good faith offer.  Sure, that would look like an immediate retreat, but it would at least prevent a central theme of the campaign's waning weeks from becoming the GOP's refusal to help Americans (while "ramming through" a Supreme Court nominee, etc).  A return to the previous status quo would at minimum give the talks a chance, and his party a leg to stand on.  And sure enough, Trump backtracked a bit last night, signaling openness to at least some limited deal -- so perhaps a climbdown is underway:

The House & Senate should IMMEDIATELY Approve 25 Billion Dollars for Airline Payroll Support, & 135 Billion Dollars for Paycheck Protection Program for Small Business. Both of these will be fully paid for with unused funds from the Cares Act. Have this money. I will sign now!

If I am sent a Stand Alone Bill for Stimulus Checks ($1,200), they will go out to our great people IMMEDIATELY. I am ready to sign right now. Are you listening Nancy? @MarkMeadows @senatemajldr @kevinomccarthy @SpeakerPelosi @SenSchumer

I'll leave you with this comment from an embattled Republican Senate incumbent, who speaks for more than a few GOP lawmakers and candidates.  Nothing is over until the people render their decision, but President Trump has been placing his already-precarious re-election prospects in even graver danger over the last few days.  His party needs him to reverse the trend lines.  Now.