Watch: Unconventional Virtual 'Roll Call' at DNC Features Each State and US Territory 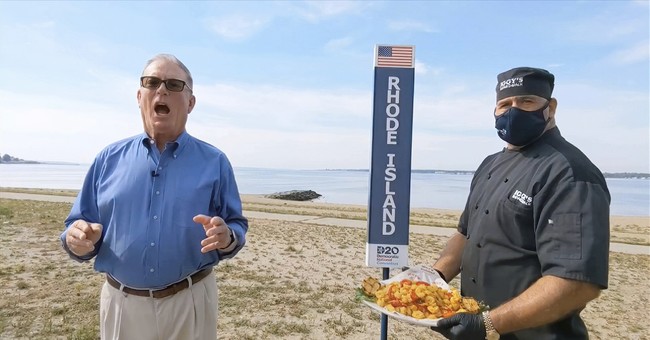 Night two of the virtual Democratic National Convention was relatively dull and unremarkable, and I think Byron York's analysis is more or less spot on. There were typical, requisite attacks leveled against President Trump throughout the two-hour program, but the only memorable moments had nothing to do with the incumbent whatsoever: Dr. Jill Biden's wonderful introductory video and lovely speech -- a positive respite from the "sad telethon" -- and Democrats' creative 'roll call' vote nominating Biden. When they started to call the roll, my initial thought was, "they're featuring this tedious, drama-free, fait accompli task in prime time?" The obvious rejoinder, which took me a second to realize, is that formally nominating Joe Biden for president is technically the whole point of this convention. Of course, they had to do it.

And their execution was quite good. Typically, this process involves bouncing around the hall, from one state delegation to the next. Each is given the microphone for a short while to promote their corner of the country in a rehearsed spiel from a spokesperson, with other delegates beaming and cheering when the microphone holder joyfully announces the number of nominating votes their state is contributing to "the next president of the United States." It's a necessary formality, dressed up with a little corniness and partisan zeal. But under this year's strange circumstances, Democrats took the opportunity to call the roll by bouncing around the country, and even the world. The little mini-speeches were familiar. The vertical state delegation placards were familiar. The settings were not. This was a real upgrade from the stale standard operating procedure:

Rhode Island may have been my personal favorite, and I'm not alone -- plus, there's an interesting little twist to the calamarimania:

This viral hero from last night’s clever DNC roll call format tells WaPo he’s not necessarily sold on voting for Biden. He says he worries about changes to healthcare and the economy, which could mean “the price of things going up.” pic.twitter.com/Y0duRmzMMc

As others pointed out, this format was visually cool to watch and highlighted the variety and natural beauty that our country has to offer. A broad consensus quickly emerged on social media that the roll call was done well, but some of the effusiveness may have been a bit much. It didn't exactly take a stroke of creative genius to dream up this highly intuitive, if not obvious, idea. But they still pulled it off well, and I hope Republicans more or less duplicate this slam-dunk concept next week. Who cares if it seems ripped off? It's a no-brainer. Also, how many people are even paying close attention to any of this? Finally, because too much of our collective political energy is consumed by cartoonish hatred of the other side, I'd encourage you to click here and scroll forward to the 5:46:15 mark to watch the introductory clip about the woman who may become America's next first lady, followed by her largely apolitical remarks. She seems like a nice person and she delivered an uplifting speech about her husband. It's worthwhile: