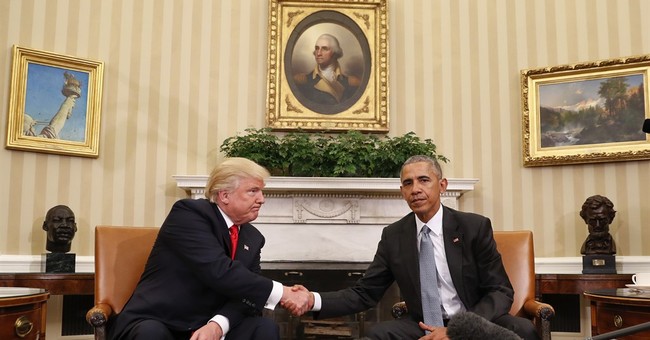 The trend of an enfeebled and dysfunctional legislative branch handing away its power to the executive branch did not start with President Trump, and it almost certainly won't end with him.  President Obama's "pen and phone" approach to unilateral, executive action-driven governance was generally cheered on by Democrats on Capitol Hill during the last administration, and now Obama's Republican successor is borrowing a page from the same playbook.  With Congress hopelessly deadlocked on 'phase four' COVID relief negotiations (more on that below), President Trump stepped in to fill the void with a series of dramatic-seeming policy announcements over the weekend:

President Trump signed four executive actions Saturday to provide additional jobless aid, suspend the collection of payroll taxes, avoid evictions and assist with student-loan payments. Mr. Trump made the moves as talks in Congress over a broad new coronavirus aid package remained deadlocked...Mr. Trump said Saturday that the administration would roll out a $400 weekly payment, funded 75% by the federal government and 25% by states. That suspension would last from Sept. 1 through Dec. 31...An executive order signed by the president Saturday directs the Treasury and Housing and Urban Development departments to identify funds to provide temporary financial assistance to renters and homeowners who are struggling to meet their monthly rental or mortgage obligations during the pandemic. The order also directs HUD to take action to “promote the ability of renters and homeowners to avoid eviction or foreclosure.”...Mr. Trump directed the Treasury Department to defer the 6.2% Social Security tax on wages for employees making less than about $100,000 a year. That suspension would last from Sept. 1 through Dec. 31...Saturday’s executive memorandum from Mr. Trump said the administration would extend [a student loan] payment moratorium and zero interest until the end of the coronavirus crisis.

As soon as these actions were announced, a debate erupted over their legality, with many people noting the cleverness of the political maneuver that could box Democrats in:

Imagine GOP would go bonkers if a Dem president did it; good politics: forcing Dems to sue to STOP benefits!

"Even if these acts are technically legal, they run counter to the spirit of our system, and continue the long-running trend of an overweening executive branch steam-rolling a feckless Congress," writes Rich Lowry of National Review, accurately summing things up.  This also strikes me as correct:

2) Trump is exceeding his authority by acting to unilaterally.

3) Obama did the same with ACA taxes, DACA etc.

3) Dems can sue (& might win!), but optics of suing to keep relief from Americans are bad.

Republican Senator Ben Sasse of Nebraska, who is up for re-election this year (though his opponent has already crashed and burned in a very red state), blasted the moves:

Again, I tend to agree, but Obama's DACA action -- which he'd repeatedly said was unlawful before he went ahead and did it anyway -- is not only still in place, the courts have shockingly blocked the Trump administration from undoing it with the flick of a pen. And as attorney and writer Gabriel Malor reminds us, Obama also went the 'enforcement discretion' route on tax policy, too:

Oh how quickly we forget. Obama directed Treasury not to enforce the ACA employer mandate for years even though the ACA said it "shall apply to months beginning after December 31, 2013."

It's part of an expansive view of enforcement discretion. https://t.co/A4uMaRmNHp

As I wrote at the time, DACA is the big modern example when it comes to executive non-enforcement (although DACA paired non-enforcement with an affirmative grant of benefits), but it's hardly the only example.

Altering payroll tax enforcement is a breeze compared to DACA.

Obama single-handedly deferred tax enforcement for political reasons, and fashioned an effective immigration amnesty for an entire class of people.  Malor points out that this was far more constitutionally suspect than Trump's new moves (and again, Obama himself once seemed to agree).  Obama he specifically cited Congressional inaction as a catalyst for his power grab, which was applauded loudly by his party and many in the press.  Now many of those same people will feign horror and transform into separation-of-powers sticklers overnight, as many Obama critics are similarly switching sides.  I suppose we'll see how the dust settles after inevitable lawsuits start to fly, but it looks like Trump is at least on partially solid legal ground, in terms of authority and precedent; as Lowry said, though, that doesn't mean that any of this should be hailed as an act of good, functional governance.

As for the "unconstitutional" charge, read this thread by a law professor at the University of Chicago, who says the president's memos and orders may prove ineffective and relatively toothless, but they're not unconstitutional.  As you peruse his analysis, you'll see why I used the term "dramatic-sounding" in my opening paragraph.  Much of it is tinkering or smoke and mirrors.  Finally, what to make of this lefty talking point (content warning)?

THE DEMOCRATS PASSED A FUCKING BILL IN MAY @chucktodd https://t.co/fnkGqSBmGE

Yes, House Democrats passed a bleeping bill in May, and it was correctly greeted as an unserious joke, even by the DC press corps and some Democrats.  The New York Times called it a "messaging document," as opposed to "viable legislation." NPR panned it as an unrealistic Democratic "wish list."  And here's Politico:

Speaker Nancy Pelosi's House is not officially coming back yet. They are waiting for the release of a new coronavirus bill, which will cost trillions of dollars. Neither this bill nor anything resembling it will ever become law -- it’s a Democratic wish list filled up with all the party’s favored policies...Privately, several House Democrats concede their latest bill feels like little more than an effort to appease the most liberal members of the caucus, many of whom were chafed that their most important priorities were minimized or ignored entirely in previous coronavirus negotiations...

Pelosi's ridiculous monstrosity packed all sorts of irrelevant left-wing nonsense into 1,800 pages, racking up a mind-bending $3 trillion of proposed spending. Among other things, it entails a tax cut for rich people in blue states, payments to illegal immigrants, a slew of insane election "reforms" that invite fraud, and racial diversity requirements for marijuana businesses.  Real eye-on-the-ball stuff, no?  To pretend that any of this even resembles Democrats having 'done their job' is laughable. Indeed, they've only increased their demands in recent weeks, tacking on hundreds of billions in additional spending requests.  Their bill is a joke, and they know it.  Pelosi can prattle on about "the children" and Republicans killing people or whatever, but that won't change the basic reality that any remotely acceptable or realistic compromise will not look anything like the idiotic "plan" they've passed.  They're playing games for political gain, hoping that hurting Americans will punish their opponents.  And now President Trump has answered in kind.