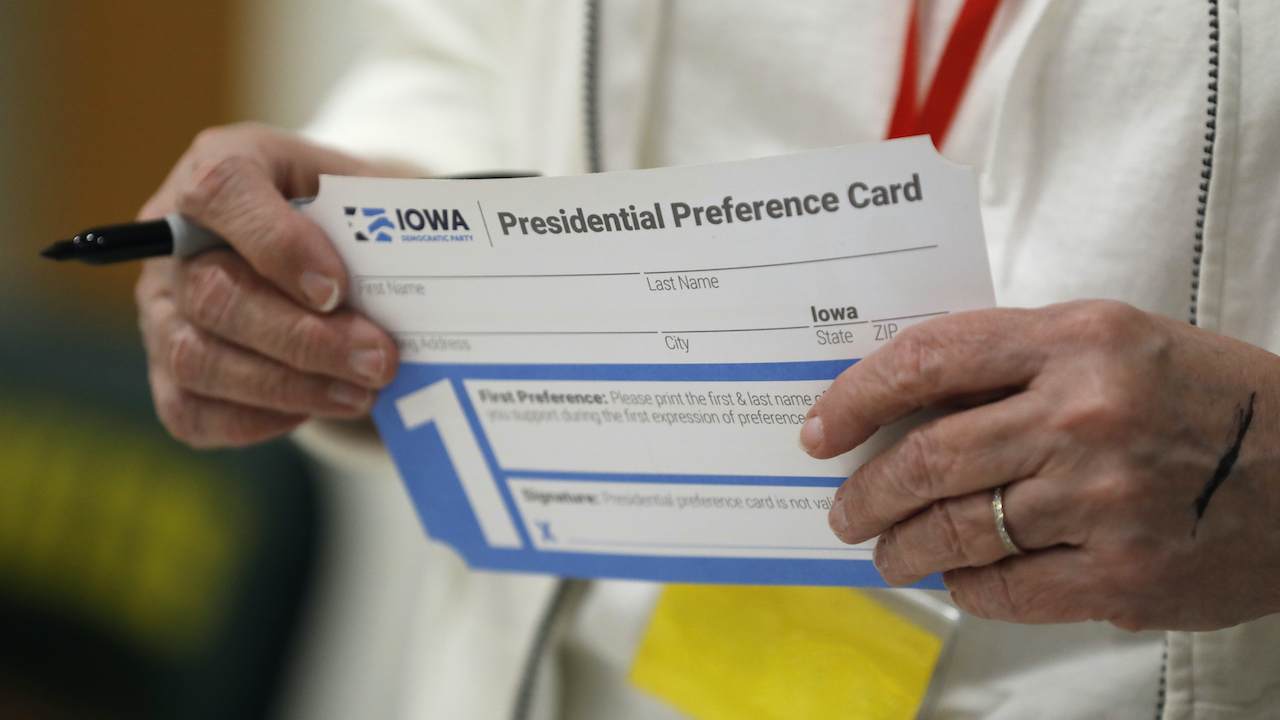 Part of me wants to simply declare the Iowa caucuses an unsalvageable and discrediting debacle, call Bernie the winner, and move on. But I can't take my eyes off of this political train wreck. Late last week, I asked whether we would ever truly know the actual definitive outcome in Iowa. My suspicion that we will never get a comprehensive accounting was further fortified over the weekend. Here's a left-leaning elections analyst raising the alarm that we shouldn't even accept the Iowa Democratic Party's claim that 100 percent of precincts have reported their results. As of late Saturday night -- five days after voting ended -- they had not:

It goes without saying that every media channel that's reporting results should immediately remove its "100% reporting" & clean this stuff up.

"Multiple precincts are entirely missing from these results, [and] are being reported as having the results of other precincts," he writes. One specific example:

The chair of the Woodbury County Democratic Party (where Sioux City is located) is quoted in that newspaper saying that they have informed the IDP of this error.

As of Saturday night, the IDP still shows the results of Sioux City 20 as tho it was Sioux City 5.

Why did I write above that Sanders should be considered the winner in Iowa? Pete Buttigieg, after all, appears to have won more state delegates, due to quirks in the system. I'd be happy to call the former mayor the winner in a split delegate/popular vote decision if I had confidence that an accurate process produced reliable and verifiable final results. I have no confidence in either, and am increasingly convinced that we'll never fully know what happened. As a result, I'm inclined to default to the candidate who unquestionably won the most votes from Iowa caucus-goers: The socialist Senator from Vermont. Let's hope things turn out better for Nevada Democrats. Gulp:

STORY: Nevada Democrats are planning to use a new Caucus Day “tool” preloaded onto iPads and distributed to precinct chairs to fold in early vote results, according to multiple volunteers and a video recording of a training session today. https://t.co/3MC2MkJAP3

Details about the tool come two days after Nevada Democrats said that they would not use any apps for their Feb. 22 caucus after a coding error in a similar program used by Iowa Democrats delayed the release of results from that state’s nominating contest earlier this week. In the video, a party staffer tells volunteers that the new mechanism “is not an app” but should be thought of as “a tool.” ... Asked by a volunteer how results would be transmitted from one place to another, the staffer demurred.  “Those are all excellent questions, and we’re still working out some of the details around those so I’ll make sure that everyone has more information as we’re able to share it,” she said. In interviews, volunteers said they received little information at the training beyond a rough outline of how the tool is supposed to function. They also were unsure how the party plans to carry out its four-day early voting period

Don't call it an "app," call it a "tool." What's the difference? Doesn't matter, just use the 'correct' term. How does it work? We'll get back to you. And the volunteers who will run the caucus aren't sure about its functionality either. Good stuff. Top notch. As for New Hampshire, which runs a straightforward primary, polling shows Bernie Sanders consistently leading, Pete Buttigieg in second place, and Amy Klobuchar (my Friday night debate winner) surging.  Joe Biden looks dead in the water, underscoring my clarion call last week about the worrisome position in which his campaign finds itself. And Elizabeth Warren, lacking Biden's theoretical firewall/springboard in a place like South Carolina is staring into the abyss. This is not confidence inspiring:

"Instead, the Warren campaign has suggested that winning the primary in her neighboring state is not essential to her path to victory — raising the eyebrows of some of her rivals — and is pointing instead to her expansive nationwide organization."https://t.co/O3fPxaFxs2 #fitn

I'll leave you with a bruising assessment from Peggy Noonan's latest column:

Iowa made them look the one way a great party cannot afford to look: unserious. The lack of professionalism, the incompetence is the kind of thing that not only shocks a party but shadows it. They can’t run a tiny caucus in a tiny state but they want us to believe they can reinvent American health care? Monday night when the returns were supposed to be coming in, it was like the debut of ObamaCare when the website went down. Iowa, which for almost half a century has had a special mystique, has lost it. It will never be first-in-the-nation again. The candidates, who worked so hard for so long, were denied their victory moment. Did the movers, operatives and networkers who were behind the app and the technology have any consciousness of what they were changing, of the history they were changing, if they failed? The professionals were detached from their own voters, and not invested enough to give them a functioning primary.

When Iowa's results app failed, precinct leaders were told to send photos of their results worksheets to a dedicated email address.

But nobody checked the email address. There were 700 unread messages by Tuesday morning, with most photos sent sideways. https://t.co/pLMxAV6kmz