Analysis: Soleimani's Killing Was Justified, and Too Much of the Reaction Is Fixated on Trump 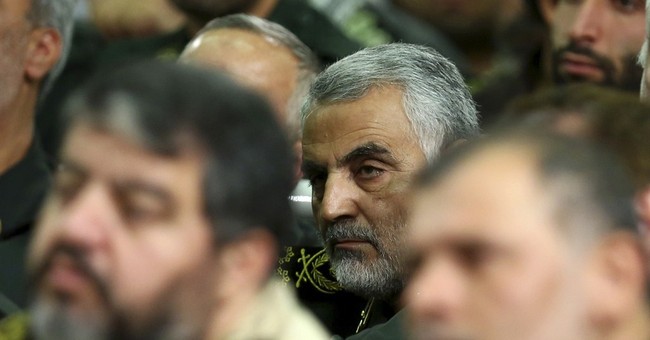 When the news broke last night that Iranian general and top terrorist mastermind Qassem Soleimani had been killed in a US strike, my initial reactions -- beyond waiting for confirmation -- were satisfaction and trepidation.  Satisfaction, because an evil man who was responsible for many thousands of deaths (including those of at least 600 American soldiers) has been erased from the planet.  Iran is the top state sponsor of terrorism, and Soleimani was their most senior terror exporter.  His despicable crimes have been punished and the patriots whose lives he stole have been avenged.  This is justice.  Trepidation, because Soleimani was a towering figure within Iran and among its proxies, and his death will elicit an angry, unpredictable, and perhaps desperate response.  They want revenge.

His killing is unlike the elimination of a non-state terrorist organization's leader, a reality that has both positive and negative implications.  On the upside of the ledger, his decapitation represents a very serious blow to Iran's malevolent regional and global designs, as Soleimani will not be replaced easily.  He was seen as an indispensable figure within the regime's power structure.  On the downside, Iran's capacity to strike back in various capacities will likely be greater and more sophisticated than the ad hoc retaliations of a terrorist group.  It's rational to fear where a series of escalations could lead, even if one approves of the righteous decision (preceded by lots of recent context and previous escalations) to take Soleimani out.  The strike that targeted him was not, it must be said, an "assassination," as many on the Left are framing it:

It's very important that Suleimani was killed in Iraq. Why? Because American troops are lawfully in Iraq -- there by congressional authorization and with the permission of the Iraqi government. Moreover, they have a right of self-defense. /2

I am also struggling to swallow hand-wringing like this from members of the Obama foreign policy team:

Congress has to assert itself and determine exactly what our Iran policy is. Did we mean to do this? Do we have any plan for what comes next? What is the legal basis for all this?

This is the same Ben Rhodes who boasted of his "echo chamber" machinations to mislead Americans on Iran policy, and who pushed a fatally flawed nuclear deal with Tehran that was publicly opposed by a strong bipartisan majority of Congress.  The previous administration did not care one bit about Congressional assertions of power or unity/clarity on Iran; it imposed its unpopular accord unilaterally, bypassing the legislature.  It is fair, however, to ask tough and serious questions about what comes next -- and US preparedness for the uncertain yet inevitable blowback.  Many are pointing to a flashback clip in which candidate Trump's ignorance on Soleimani and the group he led was laid bare.  Fine, but he's Commander in Chief now, surrounded by top military and foreign policy experts.  And he'd reportedly resisted substantial reprisals against Iranian aggression for years.  The latest attacks against US personnel inside Iraq, including an Iran-backed siege of our embassy, changed the calculus.

Perusing many of the early American social media reactions to Soleimani's death was a dispiriting experience because a large percentage of the 'takes' fixated on Trump, one way or another.  Some pro-Trump partisans made it largely about the president's toughness and courage compared to his predecessor.  Political points.  Some anti-Trump partisans have tried to spin the justified killing of a top terrorist and slaughterer of Americans into a reckless act that will bring about World War III.  Yes, the American leader's decisive role in this strike is undeniable and crucial.  And yes, there are legitimate concerns about what the complex aftermath will look like.  But some events are larger and more significant than our endless, petty domestic partisan feuds.  This is one of them.  I'll leave you with this:

This could only have been done with Iraqi cooperation. It’s also a sign that this was a planned operation and the administration is taking retaliation concerns seriously as such actions will be more difficult with pro-Iran militia leaders in custody. https://t.co/N2DNtZsLqE