The Sharpton Effect: Trump's Knee-Jerk Opponents Are Actually Helping Him 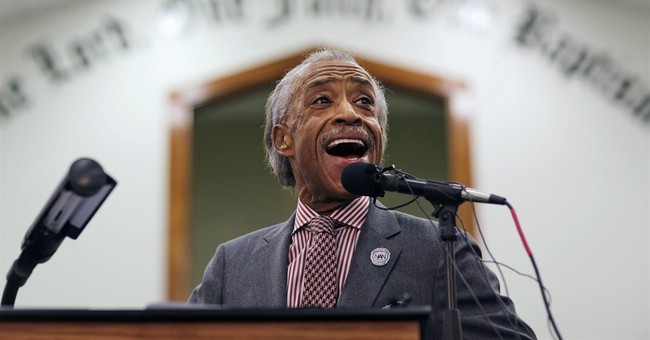 As the political chattering class has been focused on parsing and analyzing every syllable of this week's Democratic debates, I'd like to briefly revisit an illustrative episode that helps underscore one of the President Trump's most powerful advantages heading into 2020.  Because the Resistance-minded media and Democratic Party are on constant hair-trigger alert to signal their strident and total opposition to Trump, this impulse often leads them to make dumb, indefensible, strategically-damaging, reactionary decisions.  This is true on the policy level, of course, but it also bleeds over into associations and alliances.  As Katie pointed out on Tuesday, several top-tier presidential candidates went out of their way to extol the supposed virtues of Al Sharpton, in response to Trump's hard swings at the infamous New York City-based race hustler -- which arose out of the whole Baltimore blow-up.  A sampling:

@TheRevAl has spent his life fighting for what's right and working to improve our nation, even in the face of hate. It's shameful, yet unsurprising that Trump would continue to attack those who have done so much for our country.

A "champion" who has "spent his life fighting for what's right" and "justice for all."  This is unvarnished garbage, for reasons we'll explicate below.  One might think that one could tailor a critique of Trump's tweets and rhetoric without rushing headlong into a fawning endorsement of Sharpton's poisonous legacy, but these Democrats cannot help themselves.  No one forced these leaders to publish these glowing reviews.  They did so on their own volition, for political reasons.  By cheering Sharpton as some sort of champion of equality and justice, they are whitewashing his disgraceful record of conduct -- including his central role in perpetuating an infamous racially-charged hoax.  Via the Daily Beast:

Brawley was 15 years old in 1987, when she was found in her hometown of Wappingers Falls, New York, with “Bitch,” “KKK,” and “N***r” written on her stomach, her jeans burnt in the crotch, feces in her hair, and her tennis shoes sliced open. She said that she had been abducted and raped by a group of white men...Sharpton also named a local prosecutor, Steven Pagones, as one of the attackers. He offered no proof.  Gov. Mario Cuomo dispatched a veteran prosecutor, Jack Ryan, to handle the case. Brawley and her advisers refused to cooperate in any way with Ryan and his team. “That was the decision of the lawyers,” Sharpton says defensively in the Times interview. When asked why Brawley’s team would not meet with New York State Attorney General Robert Abrams, Sharpton said it would be “like asking someone who watched someone killed in the gas chamber to sit down with Mr. Hitler.” Sharpton later accused Ryan of kicking a blind man in a scuffle with demonstrators. Ryan was nowhere near the scene.

After a six-month investigation a grand jury found that the entire episode had been a hoax, with Brawley having defaced herself to avoid the wrath of her stepfather after staying out late to visit a boyfriend.Subsequently, both of her attorneys had their law licenses revoked (Mason for unrelated reasons) and Sharpton was found guilty of defamation in a lawsuit brought by prosecutor Steven Pagones, who quickly had been able to establish he had been nowhere near the scene of the alleged crime. The Times documentary shows a wild-eyed Sharpton responding indignantly to a reporter’s question of what proof he had of the policeman’s guilt: “I have Tawana Brawley’s words,” he sneers.  Instead of apologizing, Sharpton still asserts, a quarter century later, that he deserves credit for standing by the teen, asserting darkly in the Times documentary, “something happened.”

Anyone who cites Trump's reaction to the Central Park Five case as evidence of racism, yet who defends or celebrates Sharpton, should be disqualified as a serious observer.  Having learned nothing from the race hoax fiasco, Sharpton went on to recklessly and hysterically pour dangerous fuel on fires of ethnic and racial resentments, fomenting two violent riots:

Sharpton was a key player inflaming the 1991 Crown Heights riots following the death of a young African-American who was hit by an ambulance driven by a Hasidic driver. Sharpton called Jews “diamond merchants” with “the blood of innocent babies” on their hands. A mob subsequently attacked and murdered an innocent Hasidic Jewish student visiting from Australia. (Twenty-five years later, he wrote a mealy-mouthed not-quite apology for his rhetoric.) A few years later, an African-American Pentecostal church asked a Jewish tenant of a church-owned property, Freddie Fashion’s Mart, to evict one of his subtenants, an African-American-run record store. Sharpton led protests crying, “We will not stand by and allow them to move this brother so that some white interloper can expand his business.” One of the protesters attacked Freddie Fashion Mart, shot several customers, and started a fire that killed seven employees.

Sharpton has also appeared with hyper-bigot Louis Farrakhan numerous times, including during this controversial (at best) speech.  Only on the Left can someone with this sort of abominable track record have his image rehabilitated to the point of being lauded as a hero of racial equality by presidential candidates, having been normalized by a prestigious mainstream media network, and a President of the United States.  And the above examples don't even begin to touch upon Sharpton's extremely sketchy alleged but unproven financial dealings and habitual tax evasion.  Each 'tribe' defends its own, but only one has the overwhelming backing of cultural taste-making institutions that can transform an absolutely shameless bigot and race-baiter into a figure 'respected' by polite society.  Of course, many Americans in the political center will never think of Sharpton fondly, and will be repulsed by the accolades being lavished upon him in the name of fighting Trump.  Indeed, this mortally bankrupt overreach could well drive some people into Trump's camp.  As I said on my radio program, it seems at times as if Trump could not ask for more helpful enemies:

Finally, if you don't understand my caption on this post, watch this.