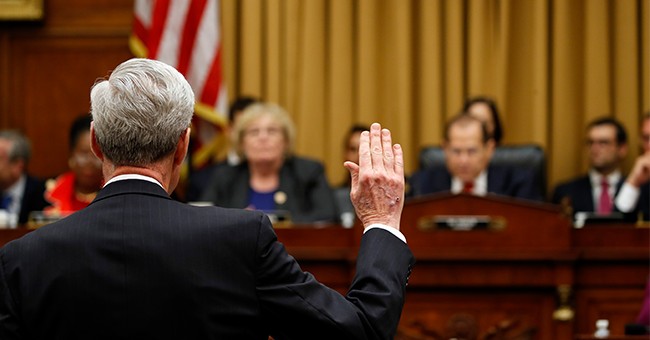 This morning's hearing was not helpful to former Special Counsel Robert Mueller, nor to the Democrats who forced him to testify.  As others have commented, Mueller was an extremely hesitant witness, and we now know why.  As expected, he repeatedly refused to comment on matters that were not mentioned within the four corners of his report, occasionally even declining to comment further on names and items that were mentioned.  Over and over again, he asked lawmakers to repeat their questions, appearing to be battling some combination of a hearing problem and comprehension issues.  With some frequency, Mueller seemed not to recall or understand the contents of the nearly 450-page document that bears his name:

He did not inspire confidence as a sharp, tough-minded prosecutor in full command of his work.  That is not a commentary on his integrity, professional history of reputation, all of which are above reproach, in my book.  It is a commentary on how his probe will be regarded by the public.  Republicans and conservatives are rallying to this critique:

All due respect to Mueller, but it's obvious now that he was merely a figurehead for the investigation. So a Republican was the nominal leader of a group of Democratic prosecutors who actually led the probe.

So far, it's proving to be a good strategy, too. https://t.co/HHwiWB2HPW

Expect to hear that a lot.  Democrats had a few made-for-television moments, though Mueller's disorientation and halting responses limited Team Nadler's capacity for 'highlight reel' sound bytes.  The problem for the Democrats is that the supposedly big 'gotcha' moments were simply Mueller affirming damaging-looking facts and allegations listed in the document that has been in the public realm -- picked apart and argued over ad nauseam -- for months.  We discussed some of them here (my stance against impeachment was only reinforced today).  The shareable moment of Mueller stating that his report was not a total exoneration of the president, as the president has claimed, wasn't terribly powerful because that conclusion was literally in the document itself, and has been highlighted repeatedly.  Polling shows that the public already disagreed with Trump's over-broad boast about the extent of his exculpation.  As for collusion, Mueller tripped all over himself very early in the proceedings, initially stating that "conspiracy" and "collusion" were not colloquial synonyms.  But his -- or "his" -- report stated precisely the opposite.  When pressed on that inconsistency, he meekly deferred to the written report, which bolsters the president's "no collusion" bottom line:

Mueller first says collusion and conspiracy are NOT synonymous. Collins points to a specific section of the report which he says states they are. Mueller backtracks, says he will stand with what is in report.

Mueller also appeared to tie himself into knots on the issue of whether the president would have been indicted if not for an Office of Legal Counsel memo that provided the legal guidance that such an action against a sitting president is not permitted.  At times, Mueller seemed to suggest that the OLC memo was the reason charges were not considered or brought.  But in his prepared testimony, as well as in the report, he also cited "fairness" principles as informing that decision.  Furthermore, Attorney General Barr has averred that Mueller told him and others that the OLC guidance was not the key factor in reaching his determination not to consider obstruction charges against Trump.  This was all rather confusing, and certainly muddied the waters in terms of any point the Democrats were trying to prove.  Battling in the weeds about OLC memos is not the stuff of public relations magic. Quite frequently, Mueller decided not to comment on certain questions or matters, often calling them beyond his 'purview.'  At one point, he said that he was unfamiliar with Fusion GPS.  I made this point:

Forgive me for wondering why checking out the partisan oppo research firm that hired a foreign spy with Russian sources to dig up dirt on a presidential candidate — which then served as a heavy basis for FISA warrants — was or should have been beyond Mueller’s purview.

Under GOP questioning, Mueller avoided and dodged questions about who wrote certain documents, including his infamous letter to William Barr, appearing uncomfortable when asked about why that missive happened to leak, after he'd managed to captain a leak-free ship for so long.  Republicans sought to make the case that Mueller and his (heavily partisan) team ignored significant components of a holistic examination of foreign interference in the 2016 presidential election, casting doubt on whether Mueller was truly in charge of the enterprise in a comprehensive way.  Unfortunately for Mueller, he contributed to those doubts today.

Bottom line: This did not advance the cause of impeachment, which may actually come as welcome news to Democratic leadership.  It wasn't just a dud; it was "very painful," in the words of David Axelrod.  I suspect that Chairman Nadler secretly knows that he would have been better off never holding the hearing in the first place, and letting this remain as Mueller's last word.  And above all, I feel confident that the vast majority of Americans do not care about what happened today.  People had already made up their minds on this overall subject, and the game was not changed one bit by Mueller's testimony earlier -- except, perhaps, in the sense that independent-minded observers' confidence in Mueller may have been dented.  Ironically, both the president and the House Speaker may be smiling today, as both oppose impeachment, albeit for different reasons.