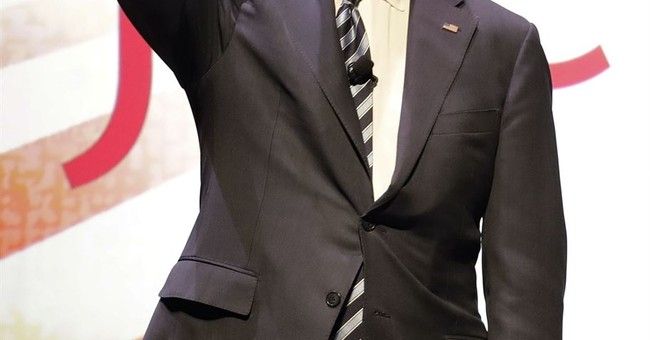 Republicans are taunting Democrats' 2020 frontrunner as "Hidin' Biden," highlighting a pair of media reports examining the former Vice President's relatively sparse campaign schedule and early allergy to question-and-answer sessions with both voters and journalists.   The Washington Post reviewed Biden's Memorial Day weekend calendar, contrasting his pace with other candidates in the race.  Guess who went dark for the holiday?

Sen. Bernie Sanders (I-Vt.) plans to enjoy ice cream with New Hampshire voters to celebrate Memorial Day. He won’t be far from former Maryland congressman John Delaney, another presidential candidate, who’s in the midst of his 19th trip to the state and plans an itinerary that includes four barbecues, one parade and a wreath-laying. In Iowa, Sen. Cory Booker (D-N.J.) is rolling through the cornfields in an RV, while Sen. Kirsten Gillibrand (D-N.Y.) unveils a “Family Bill of Rights” and tours an ethanol plant. And here’s former vice president Joe Biden’s agenda for the holiday weekend, according to his campaign: “Joe Biden has no public events scheduled.” Those seven words are becoming familiar for the Biden team. Aside from a campaign swing right after announcing his candidacy, Biden has kept his head down while his rivals rush from state to state to state.

In a strikingly cutting line, the Post reports that, "voters are going into events with him expecting ‘Uncle Joe,’ but they come out having seen ‘Grandpa Joe.’"  CNN picked up on the same thread, somewhat reinforcing President Trump's "Sleepy Joe" nickname for his would-be challenger, and underscoring an emerging strategy that will undoubtedly receive pointed criticism from Democratic rivals:

The former vice president has held 11 public events since launching his campaign on April 25. That’s fewer than most other candidates: former Rep. Beto O’Rourke of Texas had held 12 by the end of his second night as a presidential candidate. Sen. Elizabeth Warren of Massachusetts held the same number — four — in Iowa on Sunday that Biden has held to date there. And Sen. Bernie Sanders of Vermont held three in New Hampshire on Monday, matching Biden’s total for the entire campaign. And unlike most of his opponents, Biden has usually declined to take questions from his crowds or reporters...Biden promises in nearly every speech he makes that ‘no one is going to work harder’ to earn votes in the race for the 2020 Democratic presidential nomination. So far, though, Biden has been less active than many of his competitors.

In yet another negativity-laced piece, Politico points out that at the few events Biden has deigned to hold, crowd sizes have been relatively modest, with the buzz and sizzle of excitement fairly muted:

He’s dominating in the polls, his fundraising is going gangbusters and he’s showing broad support from key political players in the early presidential states. So where are the big energetic crowds, the lines around the block to get into Joe Biden’s events?  The question is no small matter in a party still recovering from a bitter 2016 defeat — a loss marked by a lack of enthusiasm for an establishment nominee in several critical states. Attendance at the former vice president’s launch rally paled next to some of his rivals. In his first Iowa visit, he didn’t match the crowds that greeted Elizabeth Warren or even the less well-known Pete Buttigieg in their initial visits. So far, he’s kept his events to smaller venues where there’s little danger of empty seats. In the eyes of Biden’s progressive critics — as well as President Donald Trump, who has publicly mocked him for it — the seeming lack of excitement or teeming masses at his events is a leading indicator of a lack of passion for his candidacy.

Is Uncle/Grandpa Joe mailing it in, or prematurely sagging back into a "prevent defense" mentality, given his significant national polling lead and gaffe-prone reputation?  I'd argue that it's too early to tell.  With the first primary debates still a month or so away, most Americans aren't dialed into the 2020 cycle yet.  If ever there's a time to husband your resources and energy, sit back on your haunches, and build a formidable war chest, it's now -- especially if you're in the driver's seat, even temporarily.  Another advantage Biden is currently enjoying?  A ridiculously massive Democratic field:

"The field is too big. You wonder if some candidates are getting negative ratings simply as a result of voters questioning whether they really should be running," said pollster Patrick Murray. https://t.co/cvS4hFWHa1

Put bluntly, Biden is "hiding" at the moment because he can.   If the former Senator and VP is still maintaining a leisurely pace, and drawing underwhelming crowds, after the field winnows out, and as the general public tunes in, that'll be another story.  But for now, this strikes me as overwrought insider-y concern trolling among the political class.  Most people neither know nor care about this "narrative."  Yet.  Plus, it must be asked: Is Trump doing Biden's talking for him?  This tweet over the weekend was pretty roundly criticized, and for good reason:

North Korea fired off some small weapons, which disturbed some of my people, and others, but not me. I have confidence that Chairman Kim will keep his promise to me, & also smiled when he called Swampman Joe Biden a low IQ individual, & worse. Perhaps that’s sending me a signal?

An American president virtually high-fiving a murderous communist dictator -- who happens to be pushing the limits of American patience on missile tests -- because he parroted a school yard taunt about a domestic political opponent is a really bad look.  It's an explanatory symptom of the potentially-lethal gap between Trump's economic and overall job approval ratings.  With people riding to Biden's defense all over the news, Biden is getting airtime and ink without saying a word. It's a gift to him.  Of course, Trump's critics often play into his hands and go too far, or expose their own selective memories.  With the president lobbing more barbs Biden's way during his state visit to Japan, some opponents are hand-wringing about the "norm" of statesmen refusing to engage in partisan politics while abroad.  Flashback:

Re: "politics stop at the water's edge," here's Obama in the Philippines in 2015 blaming Republican rhetoric for the rise of ISIS. pic.twitter.com/QismXPhp5k

I'll leave you with the latest line of attack Trump appears to be test-driving against Biden, which I agree is farcically incoherent and hypocritical, considering the source:

So Trump's position is that we are living through a period of "American carnage" and that the 1994 Violent Crime Control and Law Enforcement Act represented a "dark period in American history"? Ridiculous incoherence. https://t.co/B4OHzSDzZv

Setting aside your political or ideological views -- as a practical matter, if you were Biden, why wouldn't you keep your head down right now?