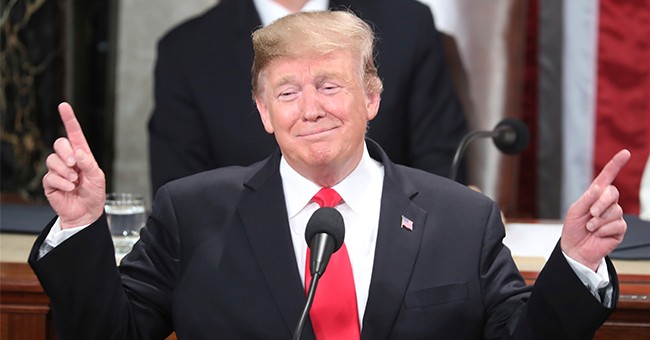 A few important caveats, lest anyone be tempted to spike the football without reservations: First, while several of these data points are definitely encouraging, whether this level of growth (and continued record-low unemployment) can be sustained through 2019 and 2020 is an open question -- and one that could be determinative as to the president's re-election chances.  Second, in the fiscal year, overall US GDP growth fell just shy of three percent, by one-tenth of one percentage point.  Third, it's virtually guaranteed that these numbers would be significantly better if the president were not engaged in multiple trade-related showdowns and tariff battles.  Whether one agrees or disagrees with his approach to trade policy (I mainly disagree), it is settled economic science that increased tariffs are anti-growth.  And finally, there's a risk that the developing global slowdown could infect the US economy, even if we're performing relatively well.  Now, onto the good news:

U.S. economic growth was better than expected as 2018 came to a close, with GDP rising 2.6 percent, according to a first estimate the Commerce Department released Thursday. Economists surveyed by Dow Jones expected a gain of 2.2 percent after a 3.4 percent rise in the third quarter. The growth came amid a bevy of uncertainty and a time when the stock market briefly slid into bear market territory...Even with the weaker fourth quarter, economic growth was solid for the year, after GDP gains of 2.2 percent and 4.2 percent in the first and second quarters respectively...Employment remains strong, with payroll gains continuing in excess of 200,000 a month and wages rising at the fastest clip of the recovery.

Fourth quarter GDP exceeded experts' expectations, topped three percent over the last year (more on that shortly), and is buttressed by sustained, low unemployment, and steadily rising wages. Bloomberg reports on a strong indicator that the GOP's tax reform law -- which is cutting taxes for the vast majority of Americans, despite universal Democratic opposition -- helped spur 2018's robust growth, thanks to increased business investment:

Consumption, which accounts for the majority of the economy, grew 2.8 percent, slightly below forecasts, while nonresidential business investment accelerated to a 6.2 percent gain on equipment, software and research spending. Government spending slowed, trade was a minor drag and inventories gave GDP a small boost...The report shows how Republican-backed tax cuts may have continued to aid growth and help bring the full-year figure to 3.1 percent, just above President Donald Trump’s 3 percent goal. While the expansion is poised to become the nation’s longest on record at midyear amid a still-healthy consumer, supportive Fed and robust labor market, the pace could cool amid the trade war, slowing global growth and fading impact of fiscal stimulus.

As that paragraph references, from Q4 to Q4, US GDP growth exceeded 3.1 percent, which is better than any yearlong period during the Obama administration. The White House's Council of Economic Advisors tweeted, "for the first time in 13 years (since 2005), according to data from @BEA_News, we have hit 3.1 percent economic growth during a calendar year (Q4 over Q4)," and added this direct comparison:

This Administration’s GDP growth for 2018 (Q4 over Q4) is higher than any year under the last Administration (highest was 2.7). pic.twitter.com/W9KjQOVbu1

Indeed, the previous administration was the first to never hit three percent annual growth, since the beginning of modern records-keeping.  Obama supporters would point out that the 44th president inherited a very bad recession. But recoveries from of deep economic holes are often take steeper trajectory; there's more ground to make up, faster. Instead, Obama presided over the slowest American recovery since World War II, hampered by wasteful "stimulus" policies, and the heavy yokes of Obamacare and over-regulation.  Trump has needled Obama over his 2016 "magic wand" comment, casting doubt on Trump's ability to bring back jobs and negotiate better trade deals.  The 45th president's record on unemployment has been inarguably outstanding, while the jury remains out on his negotiating prowess.

I'll leave you with a reminder that Hillary Clinton and people like Paul Krugman predicted that electing Trump would trigger millions of job losses and risk another Great Recession.  And because so much of the Democratic primary will be consumed by obsessive "fair share" rhetoric (taxing the wealthy even more cannot come close to paying for these programs), I'll also toss in another "fair share" update for good measure:

The top 1% of taxpayers pay about 37% of federal income taxes, more than 12x the tax burden of the bottom half of taxpayers: https://t.co/mVZq6kulTs @ericadyork pic.twitter.com/2zUENEckDL