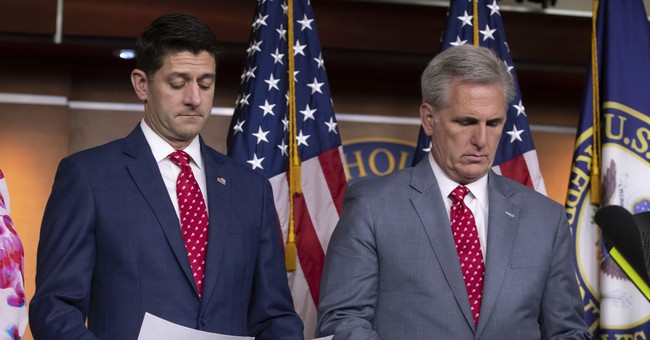 The answer to the question posed in my headline is 'yes' -- theoretically.  The GOP still controls the House of Representatives for the next few weeks, so if (still) Speaker Ryan and company can get their caucus in line, they could simply pass a DHS appropriation that meets the president's full request on wall funding.  That would not only fortify Trump's bargaining position and apply pressure to Senate Democrats, it would also embarrass incoming Speaker Nancy Pelosi, who just taunted her Republican colleagues for not having the votes.  And the next House Republican leader is telling reporters that he's "100 percent" confident that he does have the votes:

McCarthy tells Fox News tonight that he has the votes for a House bill with $5 billion in wall funding. Q: Are you 100% confident? McCarthy: "Yes, I am." https://t.co/OTuZgIkWZA

All sorts of journalists who cover Capitol Hill are expressing skepticism over this claim, citing several factors: First, absenteeism.  Dozens of lawmakers, including many defeated GOP incumbents, haven't been showing up for work lately.  What are the chances leadership can wrangle them back to DC to participate in strategic show votes?  Second, resentment.  Many of those defeated Republicans, some of whom the president foolishly ridiculed, at least partially blame Trump for their losses.  What's their incentive to help him out by joining a united loyalty front here, especially if they're considering future runs for their old seats in swing districts where Trump isn't at all popular?  Third, efficacy.  Would successful passage of this bill actually bring about a more favorable outcome when the shutdown showdown is eventually resolved?  There are plausible explanations to answer that challenge in the affirmative, but I'm not sure they're overwhelmingly convincing.

On the other hand, leadership could make various appeals to their members on all three fronts, starting with the fact that these people are still duly-elected members of the United States Congress.  They have a duty to see their jobs through to the finish line; the government is on the brink of a partial shutdown, and they should show up for work.  Furthermore, taking Trump out of the equation, many of the people who lost their races have respect for Paul Ryan and Kevin McCarthy.  They may be willing to help McCarthy avoid a humiliating failure in his very first important gambit as GOP leader.  Can you imagine McCarthy signaling total confidence in a whip count and guaranteeing passage, then falling flat on his face?  What a gift to Democrats.  Republicans of all stripes may decide they have an interest in pitching in to avoid that fate.  Finally, lame duck members can always frame their 'aye' votes as an effort to stave off an unpopular partial shutdown.

Relatedly, there are apparently agreed-upon bipartisan compromises on six of the remaining seven un-passed appropriations bills.  As I mentioned earlier, this Republican Congress has already passed more appropriations bills than any Congress has done in more than two decades, so any partial shutdown would be even less impactful than we've seen in the recent past.  Why not approve the other six bills, undercutting the typical "shutdown" fear-mongering talking points by making this an isolated fight over one department's funding?  I'll leave you with quotes from two Republican Senators, one of whom says it looks like a partial shutdown may be inevitable -- and the other cheering on Trump's hardline stand regarding border security.  "Lindsey Grahmnesty" is no more:

GOP Sen. John Kennedy says he thinks there will be a government shutdown over border wall funding. “President Trump does not look to me like he was bluffing” and Nancy Pelosi isn’t going to “agree to anything because she’s worried about her speakership,” he says pic.twitter.com/mShg9rlKL8

In February of this year, 44 Democrats, including Senator Schumer voted for a bill that had $25 billion for a wall. .... Democrats want Trump to lose more than they want the country to win. pic.twitter.com/U3L7qrkQbV

Also, if this sensible idea isn't going anywhere, Allahpundit is promoting a cheeky idea for how Democrats could troll Trump on the border wall.  And what is American politics today, other than nonstop trollery?  Here's one last thing worth reading, via one of the aforementioned House R's who fell short in November: