Parting Shots: Flake, McCaskill Blast Their Own Parties as They Prepare to Leave the Senate 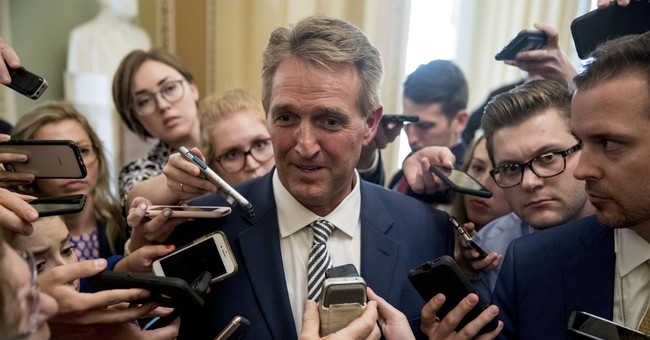 Let's start with Flake, who saw the writing on the wall vis-a-vis his own party's voters and chose to call it quits rather than standing for re-election, leading to a Democrat winning his seat.  If you haven't been following his latest maneuvers, he's been pushing hard for the 'Mueller protection' bill, insisting that he'll hold up all Trump judicial nominees until the legislation gets a floor vote.  He's not bluffing.  Many conservatives, including some who are not Trump acolytes, say the bill is blatantly unconstitutional.  It has thus far been scuttled by Mitch McConnell and other GOP Senators, most prominently 2016 Trump critic Mike Lee.  Flake's stance is that defending the rule of law is worth obstructing other priorities, so he's using his not-insubstantial leverage to force the issue.

Even though I've been quite consistent in strongly opposing any notion of the president firing the special counsel, I'm not at all convinced that pursuing a constitutionally-dubious bill is a compelling way to stand up for the rule of law -- especially at the expense of the timely confirmation of numerous conservative judges.  Ted Cruz, who arguably built his early Senate reputation on principled but unproductive or quixotic stands, is scolding Flake's gambit as...unproductive and quixotic.  And Cruz isn't the only one teeing off:

“It is not productive,” said Sen. Ted Cruz (R-Texas), who has also been known to cause major headaches for McConnell. “One of the greatest substantive victories that we have delivered for the American people the last two years is nominating and confirming strong constitutionalist judges. For a Republican senator to be blocking that is frustrating the promises we made to the voters...Sen. Thom Tillis (R-N.C.), a leading Farr backer and co-author of the Mueller protection bill, acknowledged that “you can’t not be frustrated when you see nominees that were voted out of committee with Senator Flake’s support now being held up. On, incidentally, a policy matter I support...I just don’t see any path to success, and in the meantime we’re holding up a number of qualified judges that Sen. Flake voted out of committee,” Tillis added.

Tellingly, Flake openly acknowledges that he'd probably never dream of adopting this posture (on which he's doubled down) if he weren't on the brink of retirement.  By his own frank admission, if he had to face voters again, none of this would be happening:

He said something similar after his the Kavanaugh/FBI move (which I directly advocated, by the way), but that actually had an apparent purpose.  As for this go 'round, Allahpundit isn't impressed:

[Flake's grandstanding] is annoying, for the simple reason that it’s obviously futile. Flake has leverage to inconvenience his caucus but not to actually stop them from doing what they want to do. He can push the confirmation process into next year, but that’s it. And his pet priority in this case, the cause of protecting Robert Mueller, has no chance whatsoever of becoming law. Obstruction to no meaningful end smells a lot like spite. And let’s face it, obstructing judicial confirmations is about the worst thing a Republican in Congress nowadays can do. This garbage party exists for three and only three reasons anymore: Protecting Trump, cutting taxes, and remaking the federal judiciary. They’ve already got the first two covered and now here’s Flake screwing with the third.

Across the aisle, defeated Sen. Claire McCaskill, who faced some eyebrow-raising opposition from elements of her own party over the course of her re-election push, is also sounding fairly displeased about the state of Democratic politics these days:

In an interview with Morning Edition host Rachel Martin, McCaskill characterized her loss as a “failure” of the Democratic Party “to gain enough trust with rural Americans,” and she predicted her party will struggle to win other seats as long as President Trump remains in office. “This demand for purity, this looking down your nose at people who want to compromise, is a recipe for disaster for the Democrats,” she said Thursday in her Capitol Hill office. “Will we ever get to a majority in the Senate again, much less to 60, if we do not have some moderates in our party?”

Did McCaskill actually lose because of her moderation, though?  There's a much stronger case that she lost because of her liberalism, which was wildly out-of-step with Missouri voters.  She voted against both of President Trump's SCOTUS nominees, got tons of cash from the abortion lobby and other left-wing interest groups, and outspent her Republican challenger by an overwhelming margin.  And lost.  In a blue year.  It seems pretty clear that she didn't get beaten because she was a blue dog; she got beaten because she was deep blue.  Nevertheless, losing candidates often tend to settle on a narrative that helps them process their loss, so perhaps she should write a tendentious book "explaining" her defeat -- maybe she could even title it something like, What Happened?  Since the general theme of this post is bitter intra-party squabbling, I'll leave you with a shot across Beto's bow from Rahm "Dead Fish" Emanuel (who may have his own eye on the White House), as well as a notably testy exchange between Hugh Hewitt and the aforementioned Sen. Lee on criminal justice reform and Senate procedural tactics:

Chicago Mayor Rahm Emanuel nukes the Democrats over Beto O'Rourke: "If Beto O'Rourke wants to go and run for president, God bless him. He should put his hat in and make his case. But he lost. You don't usually promote a loser to the top of the party" pic.twitter.com/0W5MfAKhDe

Just wait until the government shutdown deadline is upon us in a few days.