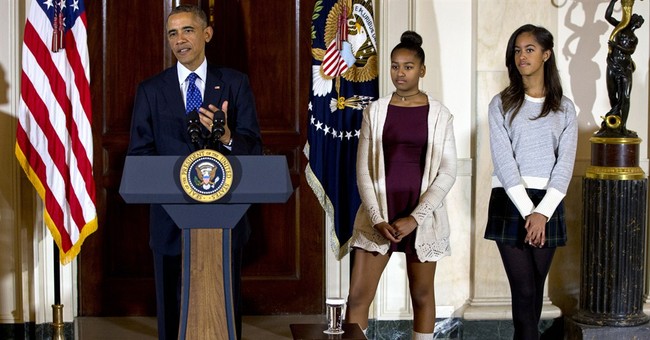 In late 2014, a low-ranking aide to a House Republican back-bencher resigned her post amid a press-driven furor over a deleted social media post, in which she criticized the daughters of President Obama regarding their appearance at a Thanksgiving-related White House event.  Elizabeth Lauten's Facebook rant about the First Daughters' attire and perceived attitude was ill-advised, far too personal, and worthy of repercussions:

Dear Sasha and Malia, I get you’re both in those awful teen years, but you’re a part of the First Family, try showing a little class. At least respect the part you play. Then again your mother and father don’t respect their positions very much, or the nation for that matter, so I’m guessing you’re coming up a little short in the ‘good role model’ department. Nevertheless, stretch yourself. Rise to the occasion. Act like being in the White House matters to you. Dress like you deserve respect, not a spot at a bar. And certainly don’t make faces during televised public events.

Many people were understandably offended by these words, which some pointed out were notably lacking in class, prompting a public outcry.  Under siege, Lauten took down the post and issued an apology:

“I reacted to an article and quickly judged the two young ladies in a way that I would never have wanted to be judged myself as a teenager,” she said. “After many hours of prayer, talking to my parents and re-reading my words online, I can see more clearly how hurtful my words were. Please know that these judgmental feelings truly have no place in my heart. Furthermore, I’d like to apologize to all of those who I have hurt and offended with my words, and pledge to learn and grow (and I assure you I have) from this experience.”

A day later, under intense pressure, Lauten resigned.  Lauten should not have spouted off the way she did, and when you represent a member of Congress, your words can have consequences.  There's no sense in scraping off this old scab and relitigating whether a forced resignation was a proportionate punishment for the civility infraction.  She was a communications staffer, she communicated badly, and she embarrassed her boss.  A string of no-no's.  But I still maintain that the degree of media attention lavished upon this dust-up was comically disproportionate.  Recall these details:

The Washington Free Beacon reported that “major media outlets are pouring resources into tracking her moves and digging into her past.” This included two network news vans camping outside of her parents’ home in North Carolina and a search of Lauten’s leaked juvenile records and college writings.

News vans outside of her parents' home. Hit pieces about a shoplifting arrest in high school. Lauten's apology wasn't enough, nor was her loss of a job. The press mobilized to destroy her.  Let's contrast that firestorm with the treatment and apparent fate of a Hill intern who has been identified as the person who literally screamed "F*** You!" at the President of the United States as he entered a meeting with Congressional Republicans last week:

A one-week suspension; "not terminated."  I'm not generally in the business of calling for people to be fired, but I can tell you this with absolute certainty: Having held two fairly high-profile internships during my college years, if I had done anything like this, in either position, I would have been gone.  Yes, President Trump often sets a very poor example on civil discourse.  But mimicking him and "fighting fire with fire" serves to normalize his worst conduct, far more than anything else could.  Including silliness like this.  Ultimately, there's simply no excuse for an intern to be shouting profanity at the president, in person, while on the job.  None. This slap on the wrist is an embarrassment, no matter what you think of Trump.

Parting thought: But what about Rep. Joe Wilson?  Setting aside the fact that his inappropriate "you lie!" outburst came during an Obama address that was littered with untruths and false promises, Wilson immediately apologized for his actions (phoning the White House to apologize personally), and -- crucially -- held a position that had the imprimatur of voters, to whom he was, and is, accountable.  Duly-elected members of Congress, by the nature of their constitutional role, are not treated the same way as at-will employees. Or interns, for crying out loud.