Memo to John Kerry on Iran Meddling: We Only Have One Secretary of State at a Time, and It's No Longer You 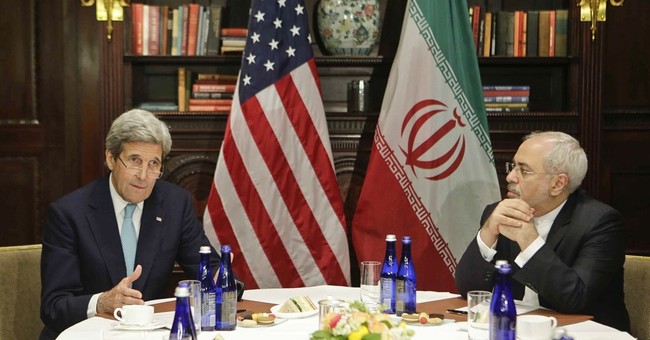 During the intense 2015 debate over the Iran nuclear deal, led by demagogue-in-chief Barack Obama, liberals responded with unbridled fury when a group of 47 GOP Senators penned a sharply-worded open letter to the Iranian regime.  The missive simply and correctly stated that if the Obama administration failed to secure the accord as a formal treaty -- which requires supermajority Senate support for ratification -- the unilateral executive agreement could be instantly reversed in the future: "We will consider any agreement regarding your nuclear-weapons program that is not approved by the Congress as nothing more than an executive agreement between President Obama and Ayatollah Khamenei.  The next president could revoke such an executive agreement with the stroke of a pen and future Congresses could modify the terms of the agreement at any time," they wrote.  They were right.

But despite opposition from more than 60 percent of Congress, including dozens of Democrats, Obama and company moved forward with their reckless plan anyway.  The Republican lawmakers who issued the controversial warning were led by Arkansas Senator Tom Cotton, who was immediately pilloried by enraged leftists as seditious, treacherous, and likely guilty of a crime.  A top Democratic official called for his prosecution under something called the Logan Act:

File charges against the U.S. Senators in violation of The Logan Act in attempting to undermine a nuclear agreement. http://t.co/0lpSDOMePk

Hundreds of thousands of liberals piled on to this nonsense, signing a White House petition demanding Republicans be jailed for the "treason" of violating the Logan Act.  This was hysterical, partisan garbage.  The law in question was passed in 1799, barring unauthorized parties from engaging in diplomatic negotiations with a foreign power on behalf of the United States. The government has never secured a conviction under it -- of anyone, ever -- let alone of duly-elected members of Congress.  Many people made the case at the time that the Logan Act did not apply to Cotton et al, if it was even constitutional to begin with, that is:

The Logan Act almost certainly does not apply to open letters that are penned by representatives from the Senate — which body, we might remember, enjoys a constitutionally enumerated role within the nation’s foreign policy. And, even if it did apply, the inevitable legal challenges would swiftly prevail. In a widely cited analysis, American University’s Steve Vladeck has proposed both that the act is “unconstitutionally vague” and that it would be “unlikely to survive the far stricter standards contemporary courts place on such content-based restrictions on speech.” Brazile’s bluster to one side, it is no accident that, in its entire 216-year existence, the measure has never been used to convict anyone. It will not be used in 2015. Over at the Huffington Post, Monica Bauer notes bluntly that she has not seen “a single Constitutional Law professor say this is a real thing,” and “for good reason.” That reason: It isn’t. Instead, Bauer suggests, the charge is being drummed up as “click bait for liberals” by the more irresponsible voices within “left-wing media” — that is, by cynics who have not set out to “educate or help,” but only “to raise money.”

The Logan Act also made another cameo appearance in our national discourse when Obama administration figures whispered to credulous reporters (or even stated out loud) that then-incoming National Security Adviser Michael Flynn had run afoul of the abstruse statue.  There are plenty of reasons to abhor Flynn's behavior, but a major designated foreign policy official reaching out to foreign governments in the midst of a presidential transition isn't one of them.  Flash forward to today, as President Trump may be on the brink of jettisoning the very Iran agreement that Cotton and friends rightly warned would be unstable and reversible if installed unilaterally by Obama.  Conservatives have long lambasted the deal as egregiously weak and permissive because it obsequiously hands Iran ultra-generous, front-loaded sanctions relief while (a) not guaranteeing universal verification access to inspectors, (b) permitting Iran's illicit nuclear infrastructure to remain almost entirely intact, (c) allowing Iran to continue its research and development of advanced nuclear technology, and (d) setting up non-contingent expiration dates after which all Western-imposed restrictions automatically vanish.

Even if Tehran technically complies with the deal's terms (while violating its 'spirit' left and right), they'll emerge from Obama's brainchild framework as a threshold nuclear-armed state and boasting an advanced, comprehensive, internationally-blessed nuclear apparatus.  To make matters worse, we just recently learned that Iran violated the deal from the get-go, failing to fulfill its prerequisite obligation to come fully clean about the history and scope of their nuclear program. We know for a fact that they were lying about their pursuit of nuclear weapons, thanks to their own documents, which were dramatically stolen and revealed by the Israeli government.  Some additional flaws are outlined here.  All of which is to say that not only is President Trump entirely within his rights to cancel the accord from the US side, he'd be substantively justified in doing so.  Afraid that his precious legacy 'achievement' may soon be uprooted, former Secretary of State John Kerry has reportedly undertaken a project of "shadow diplomacy" in defense of his terrible policy:

John Kerry’s bid to save one of his most significant accomplishments as secretary of state took him to New York on a Sunday afternoon two weeks ago, where, more than a year after he left office, he engaged in some unusual shadow diplomacy with a top-ranking Iranian official. He sat down at the United Nations with Foreign Minister Javad Zarif to discuss ways of preserving the pact limiting Iran’s nuclear weapons program. It was the second time in about two months that the two had met to strategize over salvaging a deal they spent years negotiating during the Obama administration, according to a person briefed on the meetings...With the Iran deal facing its gravest threat since it was signed in 2015, Kerry has been on an aggressive yet stealthy mission to preserve it, using his deep lists of contacts gleaned during his time as the top US diplomat to try to apply pressure on the Trump administration from the outside. Kerry also met last month with German President Frank-Walter Steinmeier, and he’s been on the phone with top European Union official Federica Mogherini, according to the source, who spoke on the condition of anonymity to reveal the private meetings. Kerry has also met with French President Emmanuel Macron in both Paris and New York, conversing over the details of sanctions and regional nuclear threats in both French and English.

Those who were shouting loudest about the Logan Act should be insisting that the feds slap handcuffs on Kerry for these maneuvers.  They won't, of course, because they're dishonest hacks who agree with Kerry's goals -- so a little freelancing is fine in this case, you see.  I seriously doubt his conduct is criminal, but this observation from Trump critic and Naval War College professor Tom Nichols is on point:

If you raised hell about what Tom Cotton did but think what John Kerry is doing is fine, you’re not only part of the problem but as much of a hypocrite as any Trumper. (And spoiler: what Kerry is doing is worse.) Don’t @ me; if you don’t get this, I can’t explain it to you.

Cotton and his cohorts chose to aggressively and very publicly defend the authority of their branch of government wields over foreign policymaking, while vociferously criticizing a proposal they viewed as dangerously unwise.  Kerry, by contrast, is slithering around in secret, pretending he's still Secretary of State as he huddles with foreign diplomats and power-brokers -- including the Iranian propagandist recently exposed yet again as an inveterate liar by the Mossad's intelligence coup -- to undermine and disrupt the Trump administration's decision-making process on this matter.  I may not be inclined to chant "lock him up," but Kerry would be well-served to remember that the title he once held, and its attendant power, now belongs to someone else.  That someone else is Mike Pompeo, an opponent of the nuclear pact, who was appointed by a president who campaigned fiercely against it.  If Kerry didn't want to run the risk of his bad agreement being flushed down the toilet by the next president, he could have crafted an accord that was robust enough to attract the requisite level Congressional support to make it a legitimate treaty.  He didn't.