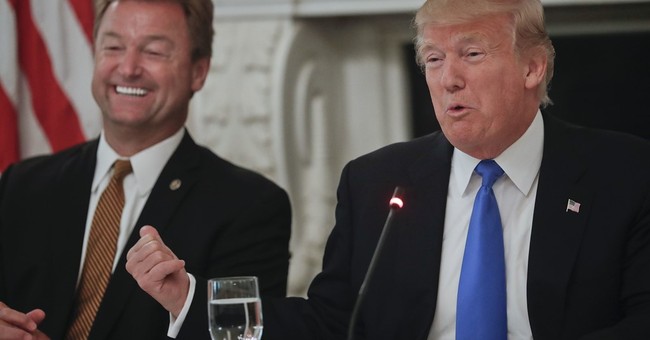 In our various analyses of the 2018 Senate landscape, we've often mentioned Nevada as one of the Democrats' best opportunities to gain a seat.  Republican Dean Heller narrowly won his 2012 race in a Democratic year, edging his opponent by just over one percentage point and falling well short of a majority.  After Hillary Clinton won his state by 2.5 points in 2016, Democrats have expressed optimism about their chances of taking Heller down this fall.  Complicating matters for the GOP was the possibility of an insurgent primary challenge from the populist Right, which threatened to further weaken the fairly moderate incumbent Senator prior to the general election.  To avoid an internal fight, the party has leaned heavily on Heller's potential Republican foe to focus his efforts elsewhere -- a lobbying effort that included direct pressure from the President of the United States:

.@DannyTarkanian has agreed, at @realDonaldTrump's request, to run for NV congressional district 3 seat instead of seeking senate seat he hoped to take from @DeanHeller. Story coming soon via @rgj

The coast is hardly clear for Heller, but his candidacy has dodged a huge headache.  Elsewhere in Senate news, embattled North Dakota Democrat Heidi Heitkamp -- who is under fire for her abortion extremism and other liberal positions -- sounds exhausted over the ongoing Hillary Clinton show:

It was a big week for Missouri's Republican attorney general Josh Hawley, who on Tuesday traveled across the state to kick off his campaign to unseat longtime incumbent senator Claire McCaskill (D.) and then welcomed President Donald Trump to the state for a Wednesday fundraiser for his campaign. Hawley's statewide tour began at Dynamic Fastener, a commercial construction supplier headquartered about 45 minutes west of the small town of Lexington, where Hawley grew up. His message was simple—Missouri is part of the American heartland that is now "disrespected and disregarded" by the liberal elites, who have McCaskill as their "eager ally."

"Hollywood and Wall Street and the D.C. political establishment have worked together to rig a system that favors them, the wealthy and well-connected, while ignoring the rest of us," Hawley told the crowd. "And Claire McCaskill is their eager ally." "These people tell us that we're the past and they're the future," he said. "Well, with all due respect, they don't know what they're talking about, and I think it's time that someone in the Senate stood up and challenged them."..."She tries to talk differently when she's in the state," Hawley said in an interview on his campaign bus as we headed to his final event. "But she's starting to let her true colors show."

Pounding away at the gap between McCaskill's 'back home' talk and her DC voting record will be a staple of Hawley's campaign -- as will anti-elitism. His remark about unnamed "people tell[ing] us that we're the past and they're the future" was a barely-veiled swipe at Hillary Clinton, whose sneering attacks on Trump voters in India last weekend insulted millions of Americans who dared to vote against her.  McCaskill, like Heitkamp, was a vocal supporter of Clinton's presidential campaign.  In fact, the Missouri liberal was the very first member of Congress to endorse Hillary's 2016 bid, having been an influential Obama backer in 2008.  Obama lost Missouri in 2012 by ten points; Clinton lost it four years later by 18 points.  A certain sitting Senator is wildly out of touch with her home state.  I'll leave you with an ad out this month hitting Wisconsin liberal Sen. Tammy Baldwin over a VA scandal in which she's embroiled: