As Angry Blame Swirls, Some Thoughts and Facts About the Texas Church Shooting 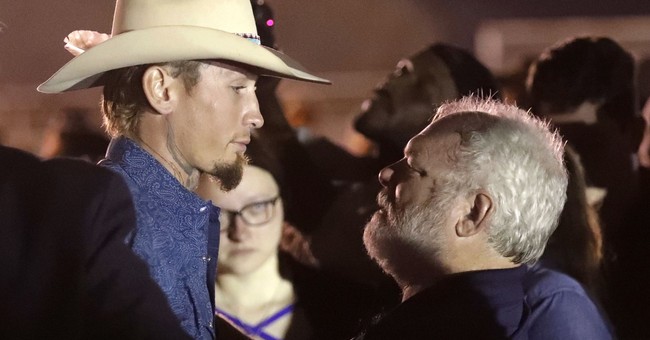 Before I make a political point, let me first acknowledge the horrifying loss of life in Sutherland Springs, Texas.  A lone gunman -- who should never have had a gun -- murdered 26 innocent people in cold blood as they worshipped in church Sunday morning.  Nearly two dozen more were wounded, some of whom remain in critical condition.  The death toll included multiple children, as well as eight members of a single family.  The terror and carnage is so awful to contemplate that it's tempting to avoid doing so; but for an entire close-knit community, the pain is inescapable and searing.  May God rest the victims' souls, and may He comfort the bereaved.

As this news broke on Sunday, hyper-political social media quickly descended into a toxic cesspool of emotional tribalism and signaling.  Sadly, that reaction was not an aberration.  Stomach-turning developments like mass shootings and terrorist attacks have become occasions for instantaneous and pitched partisan warfare, with ideologues racing to their pre-determined battle stations to launch nasty, recycled attacks at one another.  If it's a coping mechanism, it's an ugly one.  The post-shooting response cycle has become predictable and grim: Many anti-gun progressives (some of whom lambasted President Trump for quickly politicizing the recent New York City terrorist attack) instantly go down the political path, blaming the NRA and pro-gun rights politicians for the bloodshed.  Some emote and rage without any regard for the facts.  Others curse and ridicule Second Amendment supporters' expressions of sympathy and offerings of prayers.

In turn, many conservatives (some of whom defended President Trump for quickly politicizing the recent New York City terrorist attack) indignantly decry liberals who've instantly gone down a political path, frantically showcasing the most unhinged tweets and posts from leftists, almost as a form of outrage porn.  The loudest and most furious voices dominate the resulting "debate," which only serves to fuel mutual loathing and distrust -- further tearing apart a shocked and grieving nation.  And part of me increasingly worries that many of us now instinctively skip the stage of genuine shock and grief, effectively beginning the process of grappling with these tragedies as ideological combatants.  If it's a coping mechanism, it's a dehumanizing one.

As for me, I share the seething and raw emotions of others after these things happen -- and happen far too often.  I understand the impulse to impose new gun restrictions as a "solution" to human evil, even as I remain deeply skeptical of the efficacy or constitutionality of the proposed policy changes.  I also relate to pro-gun conservatives who feel besieged by grossly unfair blame and misinformation in the wake of these atrocities, even as I remain deeply skeptical that channeling that frustration by hunting down and shaming the other team's worst excesses is a healthy or productive exercise.  It's not that I believe liberals shouldn't press for reforms they support, nor do I believe conservatives shouldn't fight back against the blizzard of smears that comes their way under these circumstances.  I suppose I'm just disgusted and demoralized that we now have a collective going-through-the-motions "playbook" for gruesome and unconscionable events that should be vanishingly rare.  We do, and they're not.

Which brings us to the latest savagery in Sutherland Springs.  Amid the sound and fury, two salient facts have emerged, each of which complicate cheap and simplistic anti-gun narratives: First, as Christine noted, the murderer -- who was denied a carry permit by the state of Texas -- was already legally barred from purchasing a gun, due to his military court martial conviction for domestic abuse.  That disqualifying conviction, however, got lost in the federal bureaucracy.  It was never transmitted from one element of the federal government to another, and therefore the relevant red flag never popped up during the background check to which the killer was subjected.  He improperly passed:

Sickeningly, it was a similar bureaucratic oversight that allowed America's previous church massacre perpetrator (what a revolting sentence fragment) to obtain a firearm.  The Charleston killer should have been prevented from buying a gun under existing law, but the system failed.  This strikes me as manifestly true, both in this instance and on many other topics:

It seems wise that rather than piling up new laws, we should work together to ensure that the ones we already have are actually applied and enforced effectively.  Rather than pretending that virtually-universal background checks aren't already mandatory, or that convicted criminals aren't already banned from buying guns, let's work to ensure that our background check databases are current and streamlined.  Second, as Matt wrote, for all the demonization and scapegoating that the NRA endures after gun-related mass killings, their members (who are overwhelmingly and assiduously law-abiding) rarely if ever turn out to be the killers.  And for all the misplaced mockery the left heaps upon the "good guy with a gun" argument in favor of gun rights, the Sutherland Springs attacker's rampage -- which may very well have continued elsewhere -- was stopped by a good guy with a gun:

Devin Patrick Kelley, the gunman who killed 26 people at a Texas Baptist church, suffered three gunshot wounds, including a self-inflicted shot to the head, Texas authorities said Monday.  Kelley, 26, was also shot in the leg and torso by an armed citizen, said Freeman Martin of the Texas Department of Public Safety, citing autopsy results. Kelley was found dead in his vehicle...After Kelley left the church, he was confronted and shot by an armed resident, Stephen Willeford. After Kelley was shot, he called his father, telling him he didn't think he was going to make it, Martin said. That's when Kelley shot himself.  It was not immediately clear whether Kelley died from the self-inflicted gunshot wound or from being shot by the resident. "However, investigators found evidence at the scene that indicates the subject may have died from a self-inflicted gunshot wound," Martin said.

The gun used by the armed civilian hero? A much-maligned AR-15.  There's more:

NRA can confirm Stephen Willeford is a member & has been certified as a NRA firearms instructor. #SutherlandSprings https://t.co/rNE15dP7HB

As we come to grips with what happened in that blood-stained house of worship in rural Texas, let's all attempt to focus on supporting the survivors and tightening up existing protocols to keep powerful weapons out of the hands of dangerous people.  In the process, no one should be asked to abandon his or her core convictions, nor should the constitution be regarded as a minor inconvenience.  But perhaps we can make an effort to avoid embracing alienating caricatures of one another -- while guarding against descending into cartoonish self-parody.  There's enough real evil in this world, which cannot be legislated out of existence, for well-meaning and generally good-hearted people to loathe each other as the enemy.  "They" aren't, and neither are we.  I'll leave you with this:

Stephen Willeford, good Samaritan who shot at church shooter: "I just wish I could have gotten there faster." pic.twitter.com/3b0bcUZ5NV