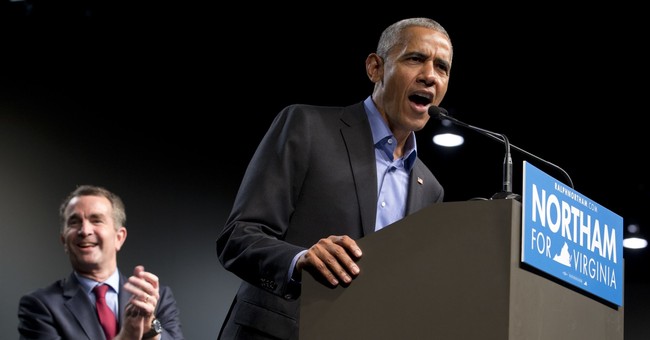 Late last week, the political media's collective heart was aflutter, as former President Barack Obama re-entered the electoral fray by addressing a rally for Virginia Democrats' floundering gubernatorial candidate, Ralph Northam.  Self-referential as ever, Obama noted his relative absence from our national politics over the past eight months; this only rings true if you're willing to pretend that he hasn't issued sundry public pronouncements blasting his successor and Republicans generally on issues ranging from the travel ban ("systemic discrimination"), to healthcare ("meanness at the core"), to immigration ("self-defeating" and "cruel"):

More high-minded, self-congratulatory claptrap from Captain Hope 'n Change, who's clearly banking on his hallelujah chorus to cheer everything he says, as most journalists nod along like bobblehead dolls:

Obama: "If you have to win a campaign by dividing people, you're not going to be able to govern them. You won't be able to unite them later" pic.twitter.com/TPAkycVMXQ

Division doesn't work, he now intones, to a rapturous reception.  Oh, is that so, sir?

(1) Obama's (successful) re-election campaign ran ads against Mitt Romney featuring explicitly "otherizing" messaging, telling voters in Ohio that the Republican nominee wasn't "one of us."  The media's 'dog whistle'  pearl-clutching if the GOP had said the same of Obama would have been a sight to behold (here's a small taste).  Obama's SuperPAC -- which was formed after he opined that SuperPACs were a "threat to our democracy" -- basically (and falsely) accused a cruel, heartless Romney killing a woman with cancer.  Simply put, Team Obama were mud-slingers extraordinaire:

(2) In demagoguing Paul Ryan's efforts to bring federal spending under control and reining in a long-term, entitlement-driven debt crisis, Obama torched a field of straw men, suggesting the Wisconsin Republican was promoting pollution and worker abuse.  His party also endlessly lied about Ryan's proposals, wrongly fear-mongering that it would devastate senior citizens, tearing through nursing homes "like a tornado."

(3) The Obama campaign repeatedly accused Republicans of waging a "war" on women ("binders!" "vote like your lady parts depend on it," etc), shattering pro-conscience assurances issued to secure the passage of Obamacare -- and even going so far as to confront Catholic nuns in a protracted legal battle in order to force them to facilitate the purchase of contraceptives that violate their religion.

(4) Obama's team explicitly gave former Senate Majority Leader Harry Reid permission to baselessly smear Romney as a tax evader, a claim he advanced from the Senate floor, with zero evidence.  Years later, Reid effectively admitted that he was lying at the time, touting Romney's eventual loss as the positive end by which his slanderous means were justified.

(5) While engaging in political fisticuffs over budgetary matters, senior Obama administration figures compared to the GOP as "hostage takers," "kidnappers," and "arsonists," not to mention suicide bombers and terrorists.

(6) Speaking before a disproportionately African-American audience at a Virginia campaign stop, Obama's Vice President and running mate warned voters that the Republicans want to put "y'all back in chains," a particularly unsubtle and ugly race-baiting attack.

(7) While pressing for his terrible nuclear deal with Iran, which was opposed by a substantial and bipartisan Congressional majority, Obama himself accused critics of making "common cause" with 'death to America'- chanting zealots.  Asked to soften that nasty calumny, Obama refused.

(8) In 2008, Obama dismissed a broad swath of rural Pennsylvania voters -- a great number of whom would, poetically, deny Hillary Clinton the presidency eight years hence -- as bigoted simpletons who "cling" to their guns and their religion, and who resort to xenophobia to explain away their own shortcomings.

(9) "Punish our enemies," Obama instructed Latino voters in a Univision interview in advance of the 2010 midterm elections, an exhortation that was called a "strident call to identity politics."  Addressing separate group of supporters in Philadelphia in 2008, Obama quoted The Untouchables in remarking on Republican political attacks that he uncharitably predicted would be racially-tinged: "If they bring a knife to the fight, we bring a gun."

(10) Obama's wife just recently weighed in on the Republican Party and the 2016 election, excoriating women who declined to do their Identity Politics duty by voting for Mrs. Clinton, stating that Trump-backing women betrayed "their own voice" and caved to men's demands.  She also claimed that many minorities voters don't have faith in politics because the GOP is "all men" and "all white."  This is flagrant and partisan racial and gender-based divisiveness.  It's also garbage:

Perhaps ex-president Barack Obama has come to believe that "division doesn't work," but the words and actions of candidate and President Barack Obama tell a very different story.  As a political figure, Obama was an incessant impugner of motives, a habitual practitioner of division, and an enthusiastic abuser of (and beneficiary of) identity politics -- which is fundamentally and necessarily divisive.  Granted, Donald Trump is an eager and instinctual divider in his own right, and a shameless demagogue.  His zeal for gutter tactics is unprecedented in modern presidential history.  And yes, the Republican Party indisputably sows seeds of calculated acrimony, and the right wing has embraced its own form of identity politics.  But it's exhausting and exasperating to sit through another self-unaware, hollow lecture about togetherness delivered by a cynical politician whose contributions to our national debates frequently betrayed his fraudulent posture as a pragmatic, unifying post-partisan.  Obama was a voracious demagogue, whose schismatic rhetoric was smoother and more sophisticated than Trump's ham-fisted, divisive forays.  And he was too often an arrogant, petulant and dishonest actor who loathed dissent, and whose self-serving and sophomoric conception of "unity" has always conveniently required Americans to either "support...his partisan cause" or be complicit in "the problem" ("that's not who we are," he is insufferably fond of saying).  Physician, heal thyself.  And in the meantime, spare us.