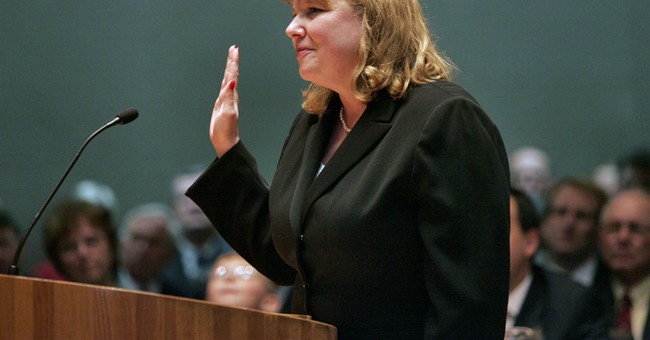 With much of the media is fixated on Russia, Comey, and potential obstruction, other goings-on inside the Beltway are getting relatively scant attention.  The White House is ramping up its focus on rebuilding US infrastructure (a common Trump campaign refrain), Republican Senators may be forging ahead with some progress on desperately-needed reforms to Obamacare's failing status quo, and the president has unveiled another substantial roster of nominees to fill federal court vacancies.  Three names on the list are slated to serve on important and influent circuit courts of appeal -- including a woman Trump has tapped to assume Supreme Court Justice Neil Gorsuch's seat on the Tenth Circuit.  Details:

One of the nominees, Colorado Supreme Court Justice Allison H. Eid, is being tapped by the president to fill a vacancy on the 10th U.S. Circuit Court of Appeals created when Justice Neil Gorsuch was confirmed for the Supreme Court in April.  Justice Eid was on Mr. Trump’s list of conservative potential Supreme Court nominees that he presented to voters during the presidential campaign last year. She has served on Colorado’s high court since 2006, and previously was the state’s solicitor general. Mr. Trump also nominated U.S. District Court Judge Ralph R. Erickson of North Dakota for the 8th U.S. Circuit Court of Appeals, and said he intends to nominate University of Pennsylvania Law School professor Stephanos Bibas to serve on the 3rd U.S. Circuit Court of Appeals. Judge Erickson has served on the district court since 2003.

“President Trump has just announced his latest batch of appellate and district court nominees. It's a fantastic list, again drawing on his previous success from his Supreme Court list, by nominating Colorado Supreme Court Justice Allison Eid to fill Justice Gorsuch's vacant seat on the U.S. Court of Appeals for the Tenth Circuit. Many of the nominees are well known in the conservative legal movement and have shown commitment to principled and evenhanded application of the law throughout their careers. For the many Americans whose top concern in November was electing a president who would put committed constitutionalists to the courts, this is another major victory.”

Prominent conservative-libertarian law professor Jonathan Adler joins the chorus of approval: "President Trump continues to put forward superlative judicial nominees with sterling credentials and impressive intellects. It's especially notable that President Trump continues to pick current and former academics for the appellate bench, more so than any recent President. This will only magnify the impact his nominees are likely to have on the federal courts," he said.  In a May post about Trump's previous round of judicial nominees, I drew extra attention to a handful of names rumored to be possible future SCOTUS short-listers, in the event that Justice Kennedy retires and/or another justice leaves the Court.  It's time to add Allison Eid as a serious contender within that elite cluster, having previously been included on the roster of Supreme Court options released by Trump's campaign.

During my stretch as a visiting fellow at Stanford's Hoover Institution this spring, I chatted with former conservative circuit court judge Michael McConnell, who himself was rumored to be a Supreme Court finalist during the Bush era.  He offered fulsome praise for Trump's recently-announced picks, and predicted that Ms. Eid would be a top candidate to replace Gorsuch.  Getting through a recent Senate confirmation process would also augment her SCOTUS resume, he said at the time -- noting that her youth, reliable judicial philosophy, winsome nature and toughness would make her an attractive option if and when a High Court vacancy opened up.  McConnell nailed his first prediction; let's see if he was also onto something when he mused that Eid may be onto even bigger things, perhaps quite soon.  And in case you were curious, it's not unprecedented, or even necessarily particularly unusual, for a recently-elevated circuit court judge or senior official to be nominated for the ultimate promotion in short order.

So far, the Senate has confirmed just one of Trump's circuit court selections, but thanks to the Reid Rule, Democrats are powerless to stop any of them without GOP assistance.  The upper chamber should move these nominations through as rapidly as possible and continue the crucial work of undoing some of the damage President Obama inflicted by packing these lower courts with liberals.  I'll leave you with this tidbit.  It looks like after enduring some criticism for a glacial pace of administration nominations, Team Trump is picking up the slack at a pretty rapid rate: