Why On Earth Did Trump Invite The Philippines' Brutal Leader to the White House? 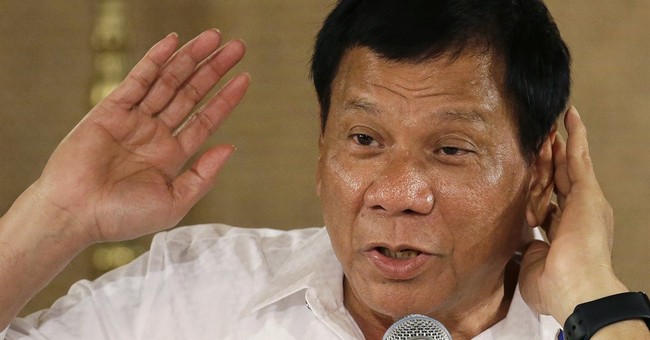 Because the Trump-era news cycle continues to churn along at an endlessly dizzying clip, it's not uncommon for big stories blip onto the radar, then quickly fall by the wayside. Over the weekend, it was reported that President Trump personally invited the leader of the Philippines to the White House. That development may elicit yawns from many voters -- presidents invite their counterparts to Washington all the time, after all, so who cares?  But Rodrigo Duterte is by no means an average international leader. He is alleged to be a cold-blooded killer, both by proxy, and by his own hand:

After decades in the employ of the Davao City government -- as an assassin, he says -- Matobato has now turned against his former paymaster. In testimony to the Philippines Senate in September, Matobato said he was part of the Davao Death Squad (DDS), which he alleges was run on the orders of Duterte. "Our work was to kill criminals like drug pushers, rapists, snatchers," he testified at the time. "Those were the people we killed every day."

Thousands of suspected drug dealers and users have been summarily executed by roving death squads, with police said to be actively participating in, or at least permitting, the slaughter. Duterte denies many of the accusations, but he's also boasted of his own violent past -- including reputedly throwing a man out of a helicopter to his death -- and has embraced Holocaust analogies regarding his crack-down on drugs:

Philippine president Rodrigo Duterte has set the bar very high for shocking statements. He’s a man who has regularly openly called for the murder of drug users, who recently flipped the European Union the bird, and who, during his successful presidential campaign in April, made a horrific gang-rape “joke” that earned him worldwide condemnation. Earlier today, he managed to one-up himself. In a televised address, he favorably cited Hitler’s genocide and expressed enthusiasm about the prospect of attempting to replicate it: “Hitler massacred three million Jews,” he said (it was 6 million, of course). “Now there is three million, there’s three million drug addicts. There are. I’d be happy to slaughter them. At least if Germany had Hitler, the Philippines would have [me].”

Now there's a show-stopper of a quote.  Bear in mind that he said that during a news conference, so it's impossible to complain that he was misquoted or taken out of context. The man is a brutal thug. More from the BBC:

It is the first such admission he has made since becoming president in June, but echoes comments he made in 2015. He ran the southern city for two decades, earning a reputation for cutting crime, and criticism for allegedly supporting death squads. Mr Duterte was speaking to business leaders at the presidential palace on Monday, before an overseas trip. It is the latest in a series of controversial and sometimes contradictory comments by Mr Duterte. "In Davao I used to do it personally. Just to show to the guys [police] that if I can do it why can't you," he said. "And I'd go around in Davao with a motorcycle, with a big bike around, and I would just patrol the streets, looking for trouble also. I was really looking for a confrontation so I could kill." In 2015, he admitted killing at least three men suspected of kidnapping and rape in Davao.

Allahpundit wonders if this invitation might never come to fruition, given the astonishing statements by, and credible allegations against, Duterte -- who arguably won the presidency last year because of his vicious and lawless anti-crime program as a mayor. US history is replete with examples of American presidents maintaining diplomatic relationships with deeply unsavory characters across the globe, from tinpot tyrants to merciless autocrats. "The U.S. has important strategic interests in their respective regions that would be jeopardized if the relationship turned hostile," AP writes. "Although the Philippines is more valuable as an ally against China than against North Korea, which is what occasioned yesterday’s phone call. Cordiality doesn’t require endorsement of an ally’s worst instincts, though, and yet here Trump is offering an endorsement for the second time in less than two weeks. Why? Is there any explanation apart from sincere admiration for the strongman’s methods?" That's an unsettling question.  The New York Times reports that Trump did not consult his senior team before extending the controversial invitation to Duterte, stunning even many within his own administration:

Trump set up a meeting with Duterte without even notifying his own State Department or National Security Council. https://t.co/GEgBDskkzf

During their “very friendly conversation,” the administration said in a late-night statement, Mr. Trump invited Mr. Duterte, an authoritarian leader accused of ordering extrajudicial killings of drug suspects in the Philippines, to visit him at the White House. Now, the administration is bracing for an avalanche of criticism from human rights groups. Two senior officials said they expected the State Department and the National Security Council, both of which were caught off guard by the invitation, to raise objections internally...Mr. Trump’s affinity for Mr. Duterte, and other strongmen as well, is firmly established. Both presidents are populist insurgent leaders with a penchant for making inflammatory statements. Both ran for office calling for a wholesale crackdown on Islamist militancy and the drug trade. And both display impatience with the courts.

Trump recently congratulated Turkish strongman Tayyip Erdogan for narrowly (and suspiciously) prevailing in a referendum on vastly expanding his existing powers, which critics say he's routinely abused. As for Duterte, the American President should not be going out of his way to confer special legitimacy on a ruler whose methods and actions are at least deeply questionable. Conservatives who view themselves as 'law and order' advocates should not seek to excuse or justify extra-judicial killings just because the victims are suspected (or even bona fide) criminals. Vigilante justice -- a "reign of terror," according to the Catholic Church in the Philippines -- doesn't become more acceptable just because its chief perpetrator and cheerleader is supposedly employing it toward arguably positive societal ends. And President Trump shouldn't get a pass just because he's the current, nominal leader of one American political tribe.  Think of it this way: If you were angry at the last president for chilling at a ballgame with the repressive Communist leader of Cuba, you shouldn't hold the current president to a different standard when it comes to getting chummy with a bloodthirsty bully. I'll leave you with White House spokesman Sean Spicer getting pressed by a Times reporter about whether his boss "has a thing" for authoritarians:

Reporter to Sean Spicer: 'Does the president have a thing' for totalitarian leaders? https://t.co/poEzmhpcu3 pic.twitter.com/FEY1oKIGWH


UPDATE: Here's a dissenting view from Tom Rogan, echoing several points made by people like John Bolton. My primary problem with this line of argument is that one can favor clear-eyed, stone-cold realism (we'll grant, for the sake of argument, that Trump actually thought this through) without bestowing prestigious, affirming gestures upon such an objectionable person.
Noem Slams Biden for Hypocritical Rules Surrounding 4th of July Fireworks
Landon Mion
A Group Of Parents Sent Their Kids' Face Masks To A Lab For Analysis. Here's What They Found
Scott Morefield
Senate Passes Bill Recognizing Juneteenth as Federal Holiday
Landon Mion
Project Veritas: Here's Why Fox Corp. Allegedly Muzzled One of Their Reporters
Matt Vespa
So, Will Liberals Go Ballistic When They Figure Out Which Trump Positions Biden's DOJ Intends on Defending?
Matt Vespa
Bipartisan Central America Migration Bill Introduced to Protect Women and Children
Carson Swick
CARTOONS | Lisa Benson
View Cartoon
Most Popular