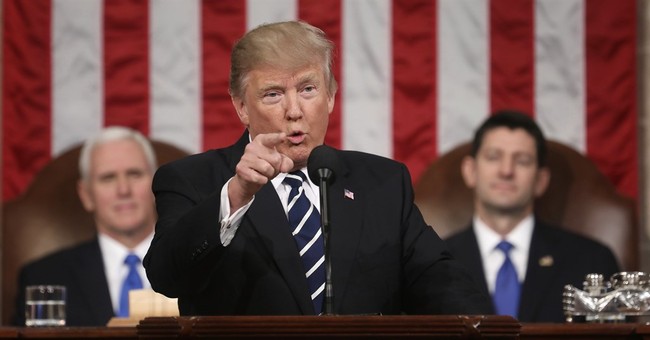 By now, it's already become calcified conventional wisdom -- but in this case, it happens to be true: Tuesday's address to a joint session of Congress was the finest speech of President Trump's political career to date. On policy substance, small government conservatives will see Trump's proposals as a mixed bag.  There were positives to be sure, but he also embraced economic protectionism and called for a wave of new federal spending, with precious little in the way of pay-fors.  The president only fleetingly touched on America's debt problem, and didn't even feign seriousness about curbing our spiraling unfunded liability crisis. But policy quibbles are for another day. Last night's annual political pageant was set up as a potentially defining moment of Trump's early presidency, and he truly rose to the occasion. His delivery and aura were strikingly presidential. His message was clear and well-crafted. His pacing felt right; his emphasis was strong.  The whole thing felt...normal, which is actually a great compliment.  Three highlights:

(1) Opening with an acknowledgement of black history month and a full-throated condemnation of bigotry was powerful and smart. The Trump White House has sustained withering criticism for what many have cast as a sluggish and lackluster response to a recent spate of anti-Semitic hate crimes and threats. On the largest stage of his post-inauguration tenure in the Oval Office, Trump spoke to these issues with moral clarity and without equivocation. It was a wise note on which to begin his address to the nation because it was both the right thing to do and politically savvy.

(2) Not every conservative is going to agree on every single provision that ends up in Republicans' Obamacare replacement package. But the president's messaging on Obamacare's failures and the pressing need for a responsible alternative was quite good, and his remarks discussing the broad principles for a replacement plan (which notably embraced the Ryan-backed policy of refundable tax credits) was undoubtedly reassuring to many consumers who are weary of instability.  Solid, disciplined, important framing of a key issue:

(3) This may have been the single most moving and emotionally-stirring moment I can recall from one of these events:

Parting thought: I'll also note that the Democratic response to Trump's address was given by a 72-year-old former Democratic governor who was replaced by a conservative Republican who explicitly ran against his pro-Obamacare record. It's always a thankless task to compete with the grand optics of a packed House chamber, but given the Democrats' depleted national bench and severely diminished standing in the states, this particular messenger seemed like an odd symbolic choice.

UPDATE - I'm not the only one offering up rave reviews:

Click the link above and check out the numbers among Democrats. He definitely helped himself last night.