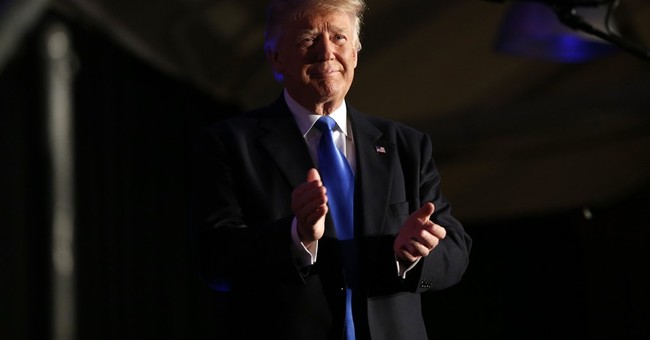 There are sound reasons why I've been counseling Donald Trump to devote disproportionate attention and resources to steadying his ship in Florida and Pennsylvania: Banking those states' combined 49 electoral votes is an absolutely essential task for the GOP nominee maintain any plausible path to victory. Polling has been quite bad for Trump in Pennsylvania for the last month, and Florida public opinion appeared to be heading south, as well. If those trends went unchanged for weeks on end, the election would over, for all intents and purposes. But then came a long-awaited Trump ad buy, coinciding with a merry-go-round of fresh Clinton Foundation scrutiny and controversy. (For what it's worth, some of the best investigative digging into the slush fund's orgy of lucrative favoritism and quid pro quo access peddling has been conducted and published by lefty journalist David Sirota). Layer on top of that a more restrained Republican candidate -- the "pivot" is still more or less intact -- and it's no surprise that the national race has closed a bit, even when you discount Reuters' schizophrenic results. But what matters most are the battleground states. Especially the ones I've mentioned. Which is why the Florida movement we wrote about late last week is so noteworthy. As is this latest data from Emerson polling, which gets a solid B rating from FiveThirtyEight's pollster scorecard. If these findings are to be believed, or even if they simply represent the start of a trend, the Keystone State is growing more competitive:

Trump's unfavorability (40/58) is only marginally worse than Hillary's (42/55), and the two are almost identically unpopular in Ohio, where Emerson finds the race deadlocked at 43 percent -- Hillary's worst result there since late July.  The Washington Examiner's David Drucker offers an important word of methodological caution about these surveys: They were generated through an automated system and exclusively contacted landlines, excluding many voters whose contact points are cellphones and online. Those factors may help explain why Emerson's results should, for now, be considered outliers. But they should definitely be plugged into the averages, and observers will no doubt keep a keen eye on whether additional confirming numbers start to pop up from other pollsters. By the way, Emerson also measured a gaping 15-point lead for Ohio Sen. Rob Portman, and a significant lead for Pennsylvania Sen. Pat Toomey (+7), both of whom are running ahead of Trump by double digits.  I'll leave you with FiveThirtyEight conceding that, yes, Trump has made some headway against Hillary nationally:

After mixed evidence before, it’s become clearer Trump has regained some ground on Clinton. https://t.co/zAJVmbiHXH pic.twitter.com/R7dfF6rjnn

It's too early for Hillary to settle into a comfortable "run out the clock" strategy, they argue, upping Trump's chances of winning by eight points within their model.  Don't pop any corks just yet; she still has an 80 percent of winning, they say. And here's Nate Cohn marveling at how Hillary appears to be heavily outperforming Obama's 2012 standing among a wide array of demographics, yet her overall margin is still in the slow single digits.  Almost as if she's a corrupt liar who is widely detested by the electorate.