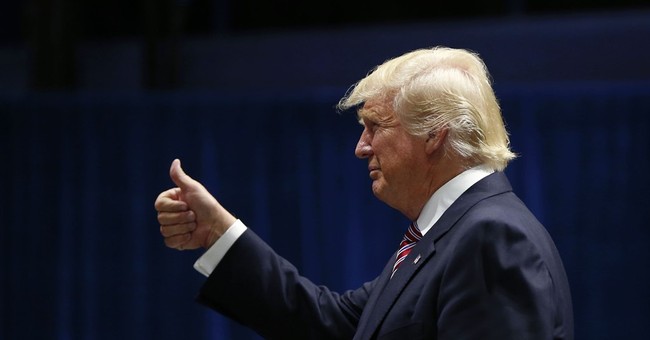 Boy, did Team Trump need some good polling news out of Florida after seven straight statewide surveys taken in August showed Hillary Clinton leading in the must-win state. We wrote a post asking if Florida was "slipping away," based on an ugly Monmouth poll, which was quickly reinforced by an even uglier result from a lesser-known pollster. If Florida really was spiraling out of reach for the GOP nominee, you could drop the curtain on this race. But wait.  Two fresh polls give Trump a margin-of-error lead over Mrs. Clinton in the Sunshine State.  Florida Atlantic University has him up two, and the Florida Chamber of Commerce has him up one (or three, depending on which metric they use):

After lots of bad news in the state, the last 2 Florida polls (FAU, Chamber of Commerce) show Trump slightly ahead: pic.twitter.com/ToG2DgUsGT

These aren't exactly prestige pollsters, but we'll take what we can get at this point.  The RCP average in Florida gives Hillary an edge of just over three-and-a-half points -- a calculation that excludes the CoC poll above, as well as the survey measuring a double-digit Trump deficit. She's ahead down there, but it's not out of reach.  That's the good news for passengers aboard the Trump Train.  The bad news?  Quinnipiac, whose results have generally been relatively Trump- and GOP-friendly this cycle, is out with a new national poll that gives Clinton a ten-point lead in a head-to-head matchup.  With Gary Johnson and Jill Stein included, her margin contracts to seven points.  This survey was in the field throughout Trump's much-discussed "pivot," featuring teleprompter speeches and a savvy visit to Louisiana amid the flooding crisis.  Maybe the impact of The Pivot will need a little bit more time to take root in the public consciousness, but these numbers aren't promising:

National Q-poll a 'big not good' for Trump, especially since it was in the field throughout The Pivot: pic.twitter.com/IrqP55vLBN

He's getting pasted by non-whites, women, and young voters -- enduring weaknesses on which he has not improved. He's also trailing slightly among independents, white college grads, and white women; Romney carried all three cohorts four years ago. Trump's profound struggles with nonwhite voters (is his 'amnesty' softening -- which has Rush Limbaugh in stitches -- an effort at mitigation?) are exacerbated by the fact that his lead among whites (+11) is just about half of Romney's 2012 victory margin within that demographic.  Based on the Q-poll, Trump is performing about as poorly as Romney did with African-Americans, Hispanics and Asians, and substantially worse with whites, too.  What's the path to victory there?  Aside from the "silent majority" or "shy voter" theories, for which there isn't much evidence at all?  (Here's a slightly more plausible spin).  Plus, in order for the former phenomenon to have a major impact in November, those voters need to be identified and turned out by the Trump campaign, which lacks anything even approaching a serious ground game...because the nominee believes such niceties are unnecessary.  Anyway, this poll also shows full 90 percent of likely voters already decided, meaning that the number of 'persuadables' is dwindling.  Tick tock.  I should note that in spite of her large lead, it's not as if Quinnipiac has measured an American electorate that is enamored with Hillary Rodham Clinton:

Despite big lead, Q-poll not a love fest for Hillary.

She's also barely above water in the "cares about ordinary Americans" category, where Barack Obama buttered his electoral bread.  This is a deeply vulnerable candidate. The trouble for Trump, of course, is that his unfavorability is in the 60's, and while he's seen as less dishonest than Hillary, he fares worse in most of the other categories mentioned above.  Two-thirds of respondents say Mrs. Clinton is qualified to be president; approximately 60 percent say Trump is not.   By roughly a 30-point margin, Americans believe Clinton is "level headed;" 71 percent say Trump is not.  I've said it several times already, and I'll say it again: Donald Trump's best, and perhaps only, chance to seriously alter the trajectory of this race -- and shift public attitudes towards him -- is in the first presidential debate. One month from tomorrow.