Schumer: In Retrospect, We Should Have Focused on the Economy, Not Obamacare 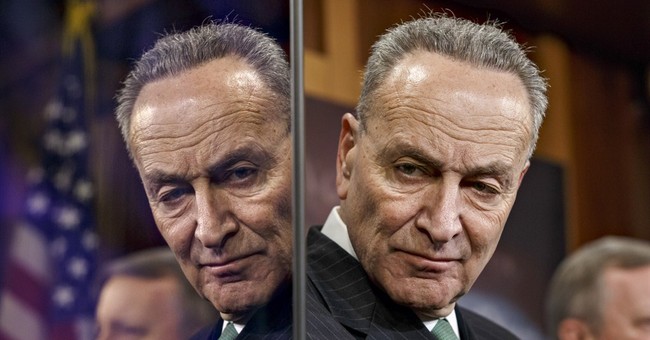 This from Senate Democrats' top strategist, whose budget-shirking, tough vote-blocking, rules-changing course of action -- carried out by Harry Reid -- still wasn't enough to salvage his party's upper chamber majority, which stood at a robust 20 seats as recently as early 2010.  He's right, of course, and now it can finally be spoken (all videos in this post via the Washington Free Beacon):


"Democrats should have continued to propose middle class-oriented programs, and built on the partial success of the stimulus. But unfortunately, Democrats blew the opportunity that the American people gave them. We took their mandate and put all of our focus on the wrong problem: Healthcare reform…it wasn't the change we were hired to make."


Several interesting bits in that clip -- from the qualified assessment of the wasteful, ineffectual stimulus program (which failed on its own terms), to the the frank admission of misplaced priorities, to the acknowledgement that the general public didn't want Obamacare (despite all of the overwrought promises and lies), to the almost jaw-droppingly candid political calculus about uninsured Americans as a voting bloc.  Also implicit in Schumer's analysis is a concession that Obamacare is not, and never was, the "jobs bill" Democrats spent so much time and effort arguing it was.  Empirical evidence has borne out that fact for years now, but it's rather striking hearing it straight from a ranking Democrat's mouth.  Schumer is obviously grappling with the political facts on the ground, as they actually exist.  President Obama was re-elected despite his signature "accomplishment" (a slim plurality of the electorate that granted him four more years favored repealing the law), and in the two election cycles that sandwiched 2012, Obamacare was a front-and-center issue.  The results horrific for Democrats.

In fact, since the infamous Christmas Eve 2009 Senate vote on the bill that would become Obamacare, 29 of the 60 Democratic Senators who lent decisive 'aye' votes will have left office by the time the new Congress convenes in January.  If I'm reading Philip Klein's rundown properly, Mary Landrieu's likely loss would make it a clean 30.  Fully half of Senate Democrats who passed Obamacare will be gone within five years of casting that vote.  It's true that a fair number of these departures had nothing to do with the law.  A few died, while others were from blue states and were replaced by fellow Democrats.  But roughly half of those who have left or are on their way out were defeated by, or replaced by, Republicans.  Democrats fought the 2010 and 2014 elections with Obamacare serving as a heavy albatross, and they were severely punished by voters who don't buy the feeble  "it's working" propaganda.  I'll leave you with two more excerpts from Schumer's speech at the National Press Club.  The first is his, er,  'solution' to Democrats' woes moving forward: Embracing big government even more.  Yes, really.  The second features his snide dismissal of the Keystone pipeline as a project that would 'only' create thousands of jobs, mostly in red states.  Cynical, cold-blooded calculation, thy name is Charles Schumer: