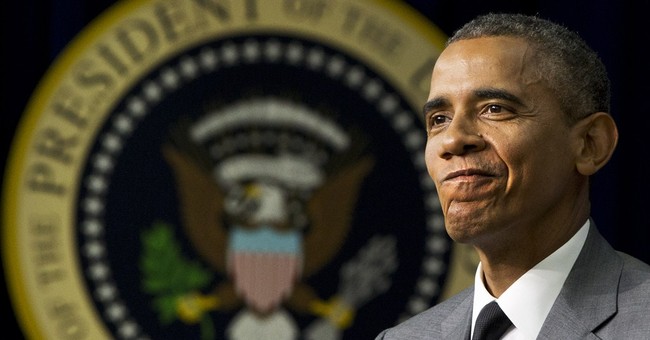 AP/GfK Poll: Obama job approval drops six net points from May to fall to 40-59, both an all time high disapproval and widest approval gap.


We ran through the immigration numbers yesterday. And now, foreign policy:

Foreign policy used to be a bright spot in Americans’ dimming opinion of President Barack Obama. Not anymore. Associated Press-GfK polling found a spring and summer of discontent with the president’s handling of world events. Obama’s consistently low marks across crises such as the fighting in Ukraine and the conflict between Israel and Hamas could benefit Republicans aiming to win control Congress in the fall…Asked about world trouble spots:

—42 percent say the conflict between Israel and Hamas is “very” or “extremely” important to them; 60 percent disapprove of the way Obama has handled it.

—40 percent consider the situation in Afghanistan highly important; 60 percent disapprove of Obama’s handling of it.

—38 percent give high importance to the conflict in Ukraine; 57 percent disapprove of what Obama has done about that.

—38 percent find the situation in Iraq of pressing importance; 57 percent disapprove of Obama’s handling of it.

Even after survey after survey has recently shown a major drop in the nation’s uninsured rate, Obamacare just had its worst month in a key health-care poll. Kaiser Family Foundation, which has done arguably the best and most consistent polling on the health-care law in the past four-plus years, found that public opinion on the law sank to a record low in July. More people than ever (53 percent) last month said they viewed the law unfavorably, an increase of 8 percentage points since June — one of the biggest opinion swings ever.


As Ed Morrissey notes, "The Kaiser series has been one of the friendliest polls to ObamaCare since 2010." He also posits that the entrenched opposition (reflected in other polls, as well) could be driven by people starting to see their new bills and trying to actually use the coverage they've obtained -- access struggles and all. Obamacare has also endured a number of ugly headlines in the last week or so, although it's unlikely that those would have impacted this survey. The administration is warning consumers to brace for more problems, too. There's also the fact that many more people have been negatively impacted by the law than who've benefited from it. I'll leave you with my Twitter summary of the state of play in DC:

Obama drops to 40% in AP poll, Obamacare opposition spikes in Kaiser poll. Senate Dems bolt town having made no "fixes," no border bill.


Let's see what House Republicans do later this afternoon.