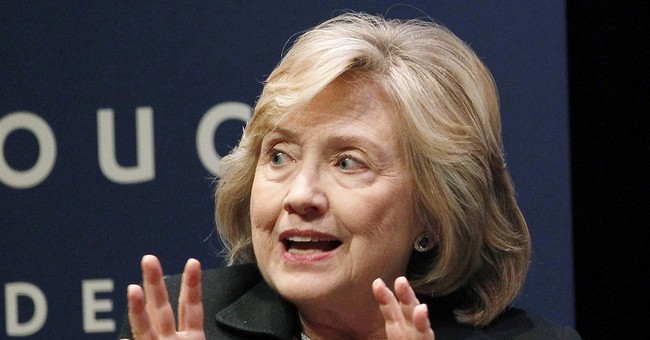 Hillary Clinton may be the early conventional wisdom frontrunner for 2016, but the American people don't seem eager to be party to an unquestioning coronation. A nationwide survey conducted by Bloomberg shows that a majority of voters do not believe the former Secretary of State's claim that she was unaware of denied security requests ahead of the 2012 Benghazi massacre:


A new Bloomberg poll suggests Hillary Clinton has her own credibility issue -- when it comes to Benghazi. More specifically, 51 percent of voters say they don't believe Clinton when she says that she never saw requests for additional security before the attacks on the U.S. mission in that city in Libya in 2012. Another 41 percent say they do believe Clinton's denials...The poll should serve as a reminder that Americans aren't keen on trusting politicians these days -- even relatively popular ones like Clinton.


Our woefully under-protected diplomatic mission was overrun and sacked in a coordinated, Al-Qaeda-linked terrorist attack on the anniversary of 9/11 eighteen months ago. Prior to the assault, the State Department denied repeated requests for an increased US security presence on the ground in the increasingly unstable North African nation. Indeed, existing security forces were actually pulled out of Libya prior to the deadly raid. Hillary Clinton's signature appears on one of the cables approving the change, though her defenders say the Secretary of State's signature is routinely attached to many memos that the principal doesn't actually see. The State Department also approved a security waiver for its Benghazi facility shortly after an attempted attack on the same mission in the summer of 2012, allowing it to continue operating below the department's bare minimum standards.

We have yet to hear any official explanations for this string of catastrophic decisions. A bipartisan Senate Intelligence Committee report released in January concluded that the attacks were preventable and that State dropped the ball. More than a year-and-a-half after the assassination of Amb. Chris Stevens and three other Americans, zero people have been held accountable for what happened that night -- neither in Washington DC, nor in Libya. Two of the central figures in advancing the deceitful "spontaneous protest based on a video" narrative have been promoted. Both were top aides to Sec. Clinton. A separate recent poll showed Benghazi to be one of the top negatives associated with the former First Lady's reputation. In other Clintonworld news, a political fundraiser at the center of a major scandal embroiling Washington, DC's mayor has admitted to also funding an illegal "shadow" campaign in several primary states during Hillary Clinton's 2008 presidential bid:


Clinton claims she knew nothing about that either. The Bloomberg poll cited above also contains bad news for Chris Christie, as a large majority of Americans say they don't believe the New Jersey governor's assurances that he was uninvolved in the lane closures scandal. A Democrat-led investigation into the matter has thus far turned up no evidence implicating Christie in the matter, over which he fired two top aides.