On Policy, the Ryan Deal is a Step in the Wrong Direction 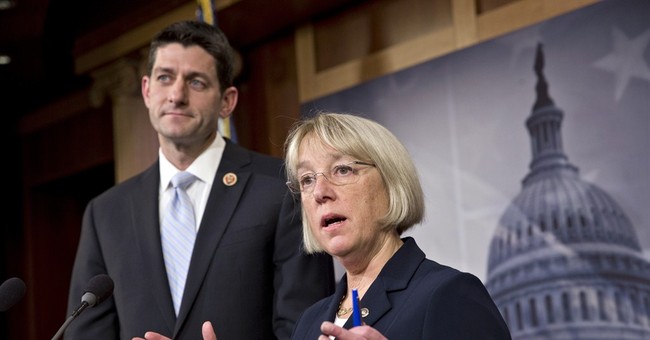 Nine months ago, after Senate Budget Committee Chairman Patty Murray (D-WA) released a plan that purportedly reduced federal deficits by $1.85 trillion over ten years, Sen. Mike Crapo (R-ID) explained at a Budget Committee hearing exactly why he was skeptical of the purported savings:

Crapo then pressed a Democratic staffer to explain what, if any, deficit reduction happened in the first year of the Murray budget:

Crapo: In terms of the overall budget deficit reduction that is achieved, whether it is through the taxes or the spending reductions that are claimed in the budget, what percentage of those are achieved in the first year? In other words, you are talking about a $1.85 trillion deficit reduction over ten, how much of that happens in year one?

Dem staffer: There are spending savings in year one, but in total it is about no [sic] in the first year.

Crapo: It’s about what?

Dem staffer: It’s zero in the first year in total because there are spending savings and spending costs.

Crapo: So I didn’t understand you. It’s zero in the first year?

Crapo: Which confirms my worry.

Judging the deal unveiled Tuesday by the same standard conservatives judged the Democratic budget this past March, House Budget Committee Paul Ryan's (R-WI) deal is a step in the wrong direction.

Taking a step back, lets break down the larger elements of the deal and see if any of them advance the cause of limited government:

- $63 billion in more spending over the next two years. A guaranteed step towards bigger government.

- $12.2 billion in pay cuts (in the form of reduced pension benefits and increased pension contributions) for federal workers. A long-term step towards limited government.

- $13 billion in increased fees for airline travel. A long-term step towards bigger government.

- $28 billion in Medicare provider cuts starting 8 years from now. A speculative step toward smaller government that probably will never happen, and even if it does, Republicans have previously argued such price-control style Medicare reforms will only drive more providers out of the Medicare system entirely.

Now, there are some other minor provisions in the deal that are positive ($2.5 billion in waste and fraud prevention is undeniably good). But if we look at just the big ticket items in the deal, and then discount future spending cuts as good conservatives always do, it is hard to see how this deal advances limited government at all.

If anything it looks like a step, all be it a small one, towards bigger government.