Strategy Session: Obamacare is Melting Down. What Should Republicans Do? 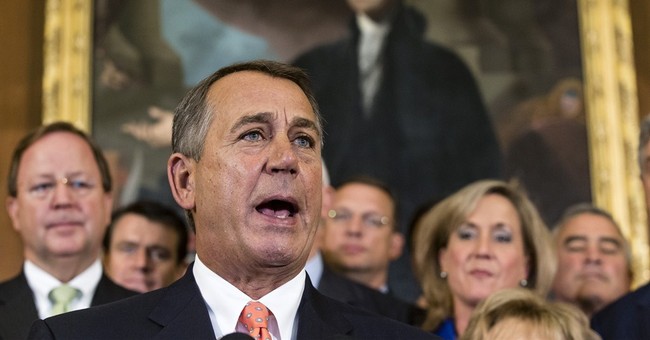 Background: Ever since the concurrent, Washington-created government shutdown and debt limit crises were resolved, the news media's attention has been fixed on the disastrous launch of President Obama's signature healthcare overhaul. Obamacare's online exchanges have performed terribly, and alternative enrollment methods (which ultimately rely on the broken web system) have proven ineffective as well. The law is forcing millions of people off of their current coverage, a blatant violation of one of the president's frequently-repeated promises -- which NBC News has confirmed was a years-long campaign of deliberate deception. Shell-shocked middle class Americans are grappling with "premium shock," as monthly costs and out-of-pocket expenses are being pushed in the wrong direction. Access to care is being limited for many, with the administration finally admitting that a large number Americans will not, in fact, be able to keep their current doctors. The government's own calculations spell out several more extinguished promises: Obamacare, which was billed as a deficit-reducing endeavor that would reduce overall national health spending, accomplishes neither goal. Independent observers worry that the law's entire financial infrastructure is unsustainable. Conservatives accurately predicted each and every one of these outcomes from the onset of the Obamacare debate, and were often smeared as liars or racists for doing so.

Pressure points and power: Republicans in Congress lack the votes to repeal this harmful law because pro-Obamacare Democrats control the US Senate, and because the president has vowed to veto any measure that would unravel his legacy project. And unlike his myriad healthcare-related pledges, Obama would undoubtedly deliver on this particular promise. Despite their relative powerlessness to roll back the law, however, Republicans have been presented with an exceptional opportunity to exploit Democrats' glaring big-government failures. Furthermore, in the fairly likely event that the administration is unable to right the ship prior to Obamacare's "drop dead date," scores of Democrats will be frantically searching for an escape hatch. As that clock ticks, what political options does the GOP have? A non-comprehensive summary:

Play #1 - Do (basically) nothing. This would not require total inaction, mind you, but it's the least aggressive of the three postures. The concept would be to adhere to the old adage that when one's enemy is self-destructing, one should get out of the way. The GOP would, of course, work to amplify the media's critical reporting on the law's technical problems, substantive flaws, and shattered promises. They would also seek to sustain the drumbeat over the next year, ramping up criticism and revisiting the parade of failures as election day 2014 draws near. The messaging is turn-key: "This is why we knew Obamacare wouldn't work, and opposed it from the beginning -- and why we're skeptical of big government 'solutions' in general." This option will appeal to those who believe that Republicans shouldn't insert themselves into Democrats' mess; they bought it, they broke it, let them wear it. It may also strike a chord with those who harbor serious and justifiable doubts about the GOP's ability to stand united in a series of strategic votes. The party just wrapped up a nasty bout of internecine wrangling over the tactics of Obamacare opposition. Would revisiting the issue touch off another round of counter-productive posturing and purity-test politics?

Play #2 - Divide and conquer. There are a few reasonable-sounding Obamacare "fixes" being floated by nervous Democrats that would actually make the law's problems worse. Some members, for instance, are pushing for an extension of the law's open enrollment period. Others are proposing a year-long delay of the individual mandate tax. These two ideas -- either in isolation, or combined -- would only accelerate what experts refer to as an insurance "death spiral." They would hasten the collapse of the law, and with it, much of the American healthcare system. Why? How? See these two posts for wonky explanations (the particulars of which we've also rehearsed several times in recent days). The White House surely understands these dynamics, which is why Obama would never let them take effect. But many rank-and-file Democrats are ignorant about the way their law works and are highly motivated to distance themselves from the roll-out mess. A one-year delay bill would be golden delicious politics, even though it's a policy trojan horse. The same goes for legislation like Sen. Ron Johnson's cunning "If You Like Your Health Plan, You Can Keep It" Act, and its cousin in the House. Democrats would be extremely hard-pressed to oppose these measures and explain their position to bewildered constituents. They would look ridiculous, hypocritical, inflexible and out-of-touch. (Imagine the president vetoing a law called the "If You Like Your Plan, You Can Keep It" Act. Imagine it). Indeed, nearly two dozen Democrats have already defected on the mandate tax delay issue...and those votes came before the excruciatingly embarrassing roll-out took center stage.

If Speaker Boehner felt confident in his ability to maintain discipline within his own ranks, he could pass both a one-year delay of the individual mandate tax, plus the "keep your plan" bill as stand-alone proposals. He'd probably peel off a lot of anxious Democrats, too, which would make the resulting passage "bipartisan". That's a magical word in Washington. Senate Republicans might then co-sponsor matching legislation with a centrist Democrat or two, then loudly demand up-or-down votes on these popular ideas. Harry Reid would find himself between a rock and a hard place: Would he obstruct a vote (creating a huge opening for the GOP to tee off on his entire caucus), or would he give his vulnerable members a chance to cast fig leaf votes? The latter move would risk passage, which in turn would press a humiliated president into wielding his veto pen to thwart widely-supported ideas. Sure, Democrats could try to explain the somewhat abstruse policy reasons why these ideas aren't feasible and would really make matters worse ("adverse selection!") -- but when you're explaining, you're losing. Play #2 represents the ruthless, hardcore populist route Republicans could take. By rallying around these broadly popular, "sensible," and bipartisan ideas, Republicans could make Democrats' lives miserable. But they'd be advocating irresponsible policies that could ruin the entire healthcare system and hurt a lot of people if adopted. Then again, it's highly unlikely that they'd ever be adopted. If Republicans are willing to fight mind-boggling cynicism with some subversive cynicism of their own, this would fit the bill.

Play #3 - Full Delay. This option is undoubtedly the most sound policy position. (This assumes that a major delay is still logistically feasible at this stage. What happens to people whose applications are pending? What about all the cancellation notices that have already gone out?) In theory, this path would delay the mandate tax by a year -- and along with it, the provisions known as "guaranteed issue" and "community rating." Insurers would not be required to accept new customers with expensive pre-existing conditions at uncompetitive rates. This is the only way to push back the mandate tax without touching off a rapid death spiral. Coupled with the administration's sundry existing postponements, the plan would amount to an effective delay of a large bulk of the law. But wouldn't this "pause" button likely afford the administration enough breathing room to get their websites up and running by the 2015 do-over launch? Probably, and it may draw some conservative hackles for that reason. Why hand Democrats a gift by helping them fix a teetering law that needs to be uprooted?

Three potential advantages: First, it's the right thing to do. Ted Cruz has said he's unwilling to entertain the full-bore "let it burn" position preferred by some conservatives, which he's likened to "Bad Samaritan" conduct. Second, Republicans could still exploit the delay to great effect throughout 2014. Remember, the "glitches" may be repaired by 2015, but the law's fundamental problems aren't going anywhere. The law's failed initial launch and uncertain future would feature prominently in the midterm elections. (As a side bonus, the GOP might manage to partially repair the damage inflicted on their brand by the government shutdown by pointing out Democrats' sudden, panicked, and overtly political reversal on delaying Obamacare). Finally, Democrats probably wouldn't accept this idea anyway. "Full delay" sounds more extreme than some of the half-measures discussed above, even though in this case the opposite is true. If Republicans beat the drums for "full delay," many Democrats will reflexively balk out of ignorance and partisanship. Let's be reasonable, they'll insist. And by "reasonable," they'll mean some variant of play #2, which destroys the law. Republicans should consider offering the "full delay" solution first, in good faith. If and when Democrats spurn the offer, all aboard the populism express.