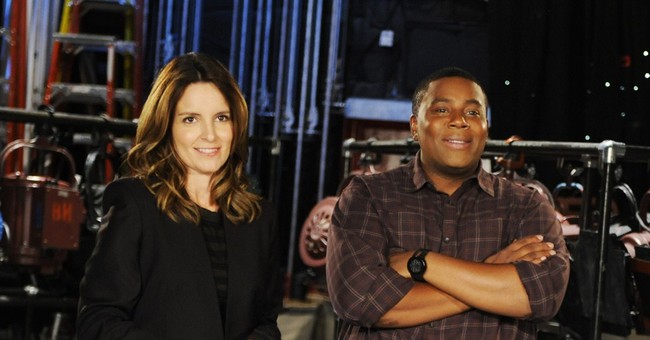 Sort of. The central premise of the sketch is that Obama hasn't "explained" his law well enough, leading to widespread confusion -- which is basically the official Democratic line on rationalizing away the law's terrible polling numbers (to say nothing of the president's). Parroting the Pelosi line, SNL? Edgy. Oh, and they couldn't resist taking a passing shot at Ted Cruz, though the audience doesn't seem to fully understand that vignette. Nevertheless, the scene does hammer Obamacare on the merits a few times, mocking its 26-year-old "child" coverage provision, and portraying the enrollment process as hopelessly confusing:

Meh. If you wanted to hear the sound of genuine laughter on Saturday night, you should have attended the House Rules Committee hearing, where President Obama's weakness was the butt of bipartisan ridicule (via CNS News):


A few minutes later, after Rep. McGovern had expressed his opposition to what the Republican majority was planning to do, House Appropriations Chairman Rodgers, who had briefly testified to the committee about the amendments, asked McGovern if he would yield. It was their exchange on Obama’s veto threat that caused the committee chamber to burst into laughter. Rogers: “Would the gentleman yield?
McGovern: I happily yield.
Rogers: You say the president has threatened to veto the bill?
McGovern: No, he hasn’t threatened. He said he absolutely will veto.
Rogers: He’s drawn a red line has he?
McGovern: Yep. At this point, the small hearing room—which was largely filled with committee members, other members of Congress who had come to testify and congressional staff—burst into laughter. Rep. McGovern, smiling, then stated his belief that the president was serious about the just-issued veto threat.


It seems Republicans in Congress take the president's threats about as seriously as our adversaries abroad. A few key differences: Obama is far more likely follow through on admonitions leveled against the GOP, and he seems more eager to negotiate with international enemies than members of Congress. In other words, he knows who the real "terrorists" are. Leadership. As the shutdown drama takes its final twists and turns, bear in mind that even if the one-year individual mandate tax delay doesn't survive through the end-product Continuing Resolution, Republicans will likely return to similar ask during the debt ceiling standoff. It's a popular idea with the public, and it could gain further steam after Tuesday's bumpy roll-out. The president has been downplaying expectations, warning Americans not to focus on the inevitable torrent of "glitches." Some in the press are explicitly parroting Obama's rhetoric, begging their journalistic colleagues to place the coming trainwreck in proper "context," or whatever. I'll leave you with a slick video produced by Speaker Boehner's office, promoting an Obamacare delay. The first ten seconds are golden: