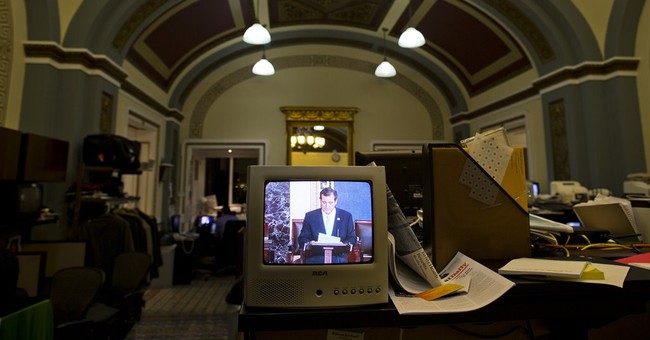 Twenty-one hours and 19 minutes after he rose to address the Senate chamber on Tuesday afternoon, Sen. Ted Cruz's quasi-filibuster has ended. Having sustained the talk through the night -- yielding only for questions from a band of Senate colleagues -- Cruz wrapped up his case at noon, his powder blue tie loosened, and his five-o'clock shadow beginning to darken. It was the fourth-longest recorded speech in Senate history. Hour after hour, Cruz and company fired rhetorical bullets at Obamacare, the president's unpopular healthcare overhaul. His talk-a-thon was punctuated with moments of levity -- such as reading a book to his daughters, and impersonating Darth Vader:

The effort was greeted with a cynical sneer from Harry Reid, frustration from some conservatives -- who are understandably irked by some of Cruz's rhetoric and repeated assertions that opposition to his tactics amount to "support" for the underlying law -- and widespread derision from the mainstream media. Politico's media critic, Dylan Byers, notices a screamingly obvious double standard in reporters' coverage of two recent filibuster-style episodes:


You can forgive conservatives for being upset with the mainstream media's coverage of the Cruz affair. When a Democrat like Texas state Sen. Wendy Davis filibusters against abortion restrictions, she is elevated to hero status, her tennis shoes become totems. When Sen. Cruz grandstands against Obamacare, he is a laughingstock in the eyes of many journalists on Twitter, an "embarrassment" in the eyes of The New York Times editorial board...Part of the disparity in coverage is due to the fact that the mainstream media, generally speaking, don't admire Cruz the way they admired Davis -- or rather, they admire him only insofar as he makes for tragicomic theater, whereas they admired her on the merits. Cruz is portrayed in the media as "aimless and self-destructive" (NYT ed board), elitist (GQ), and likely guided more by presidential aspirations than principles (CNN). Josh Marshall, the editor and publisher of Talking Points Memo, had no qualms about coming right out and calling Cruz, his former Princeton colleague, an "arrogant jerk" -- and worse...The point is that the coverage of Cruz has been critical -- and in some cases unforgiving -- from the outset. At least initially, Davis wasn't viewed through a critical lens at all. Her willingness to stand for eleven hours was evidence of the American dream in action. Period.


I made a similar point on Twitter yesterday, just as Cruz was revving up. Byers writes that the media admired Wendy Davis "on the merits," which is to say, they supported her cause. Which was the preservation of legalized late-term abortion in Texas. That these cheerleaders were wildly out of touch with the American people on the issue was hardly a concern; indeed, several media figures bent over backwards to conceal the policy objective of Davis' stand. Instead, they deflected attention to ancillary issues like her attire, stamina and determination. But because Cruz is a firebrand conservative, his marathon effort was instantly written off as the deranged, doomed ramblings of an ideologue. The irony is that even though most Americans, including a majority of Republicans, disagree with Cruz's procedural game plan on defunding Obamacare, he's at least inveighing against a law of which the public disapproves and views with intense skepticism. Incontrovertible media bias aside, what comes next? The vote Cruz is arguing against is already a fait accompli. It will pass, with the help of a number of anti-Obamacare Republicans. Stripped of its "defund" language (which Democrats alone will ensure), the temporary budget measure will ping back to the House, where Republican leadership must decide what to do with it. Two schools of thought are developing, both of which would shift from "defund" to forcing votes on "delay" -- an approach I've favored for some time. House Republicans could pass another CR that funds the government for several months, but explicitly strips away the sweetheart "carve out" deal President Obama made for member of Congress and their staff -- and/or they could include a one-year delay of Obamacare's loathed individual mandate tax:


The House Republican leadership is seriously considering attaching a one-year delay of Obamacare’s individual mandate to the Senate bill to avert a government shutdown, according to senior GOP aides. If House Republicans decide to go this route, it would all but provoke a government shutdown, since Senate Democrats might not even schedule a vote on a bill that includes that provision, Senate leadership staffers say. Even if the Senate schedules a vote, there might not be time to move the legislation through the slow-moving chamber. The House Republican leadership is planning its next move as it becomes abundantly clear that Texas Sen. Ted Cruz’s gambit to defund Obamacare will fall short. The federal government is set to shut down Tuesday unless a new funding bill is enacted, and the Senate might not even send a bill to the House until Sunday — leaving a hot potato on Speaker John Boehner’s lap shortly before a government shutdown.


Therein lies the rub. If the House passes a government-funding CR that features one or more popular 'delay' provisions, which the White House has pre-emptively shot down, Harry Reid may not even permit votes on that bill. If that's the case, Republicans could argue, "we'd prefer to defund or repeal the whole law, but the American people don't want a government shutdown, and we agree. We will continue our efforts to deal with those issues separately, both in Congress and at the polls. But given the troubling array of implementation problems -- described as a 'huge trainwreck' by one of the law's primary authors -- Americans clearly want much of this law postponed. Our bill keeps the government open and calls for reasonable delays to the unready, unpopular healthcare law. If President Obama, Harry Reid and Senate Democrats refuse to even consider this compromise bill because of political calculations, that's their business. But they'll have to answer for a government shutdown they've caused." Some recent polling suggests that the public may be at least somewhat receptive to this GOP messaging, but it would require Republican unity -- a foreign concept these days.