Round Two: 'Shoot the Messenger' Flops at IRS Hearings 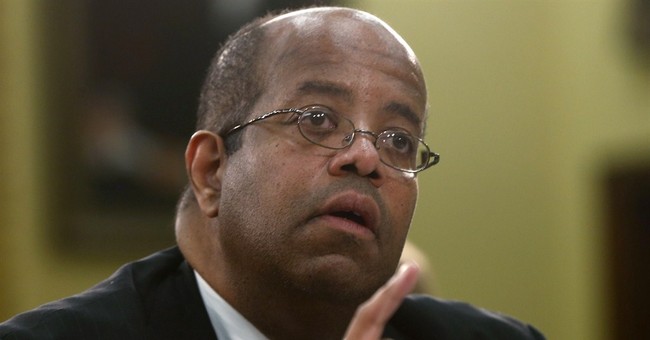 Much to my surprise, the previous round of witness testimony ended up being more significant and interesting than the late afternoon session.  IRS Inspector General Russell George defused many of the Democrats' lines of attack during his opening statement, effectively "pre-butting" gotcha-style questions.  A few observations:

(1) George reminded the committee that the IRS acknowledged and apologized for its improper targeting of conservative groups prior to the release of his audit in May.  Don't forget that the agency's own internal review -- which predated the IG's audit -- came to similar conclusions about the malfeasance, including who was victimized.  Both investigations were prompted by complaints from conservative, not liberal, groups regarding excessive wait times, interminable delays, and abusive questioning.  During the hearing, George and his team told committee Democrats that their relatively narrow field of inquiry was initially limited by so-called BOLO (be on the lookout) terms provided to them by the IRS itself.  George said that throughout his investigation, employees at multiple levels of the agency all confirmed that "Tea Party" (and related terms) was the relevant targeting nomenclature.

(2) Responding to accusatory statements from Democrats -- especially the contemptible Gerry Connolly -- about his political roots, George confirmed that he was appointed by President Bush and had worked for several Republicans many years ago.  He also revealed that he worked at the 1980 DNC and helped found Howard University's College Democrats.  That took the wind out of the "he's a Republican hatchet man!" line of argument.  Also, as pointed out by Rep. Jim Jordan and Chairman Darrell Issa (and yours truly), if George had been working in concert with the GOP, he would have made this scandal public before the 2012 election.

(3) The Inspector General said that since his audit was published, more information has come to his attention regarding BOLO lists that included liberal-sounding buzz words.  He said he's looking into those reports, and the investigation remains ongoing.  That status also applies to his work with the FBI and DOJ.  The witnesses said their inquiry into IRS officials' emails and conduct was fairly limited -- for instance, Lois Lerner's emails haven't yet been probed.  Chairman Issa said he hoped that any potential evidence (re: Lerner) remained intact, in light of her decision not to incriminate herself in Congressional testimony.  Rep. Jordan commented how unlikely it is that the IRS would have admitted to targeting one side of the aisle if they'd actually been treating both sides equally.  He said a few extraneous examples of other BOLO lists and liberal groups possibly being screened have only emerged as Democrats have grappled for fig leaves in the wake of the scandal.  Chairman Issa said that if there are any left-leaning groups who were abused the way conservative organizations were (never-ending delays, inappropriate questions, burdensome paperwork, etc), he'd like to see the evidence.  And if those examples exist, were they proportional to the Tea Party's blanket treatment?  All indications point in one direction.  One piece of evidence:

In February 2010, the Champaign Tea Party in Illinois received approval of its tax-exempt status from the IRS in 90 days, no questions asked. That was the month before the Internal Revenue Service started singling out Tea Party groups for special treatment. There wouldn't be another Tea Party application approved for 27 months. In that time, the IRS approved perhaps dozens of applications from similar liberal and progressive groups, a USA TODAY review of IRS data shows.

(4) A few Democrats bizarrely claimed that George had "withheld" his lack of evidence that the Tea Party targeting was explicitly political.  It was in his written report, and he's testified to that effect several times.  One Democrat, Rep. Jackie Spier of California, advanced the long-debunked claim that the IRS was only trying to "streamline" their review system due to the huge influx of new applicants.  I also feel compelled to commend Democratic Congressman Stephen Lynch of Massachusetts for another fair-minded performance today.  It's clear he's a loyal Democrat, but he also seems genuinely interested in the truth and put off by the partisan misdirection tactics employed by some of his colleagues.

(5) In summary, the rancor that I anticipated this afternoon never really materialized.  Mr. George and his colleagues explained their actions well, and assured members on both sides that their investigation continues.  Democrats continue to hope that at least one example of improper scrutiny of a liberal group emerges, although that's not what the IG has found so far.  Which makes sense for numerous reasons:

Zero Tea Party conservative groups were approved for tax-exempt status over a period of 27 months, while dozens of lefty groups received the green light.  Conservative organizations were deliberately buried in burdensome paperwork, fraught with wildly inappropriate questions and outrageous demands.  This emanated from, and was sometimes micromanaged by, DC.  The IRS' former commissioner testified under oath that only conservative-leaning groups were mistreated this way.  When the House Oversight Committee held hearings featuring the IRS' victims, committee Democrats couldn't produce a single liberal witness.  Oh, and the IRS admitted and publicly apologized for  their wrongful targeting of conservatives following their own internal investigation, and before the IG report was published.  If the truth was "we did it to both sides!" they would have presented that evidence early and often. They didn't.


Parting thought: If, as Democrats suggest, the targeting impacted both sides and this is all a big non-scandal, where is the "progressive-assigned" version of Elizabeth Hofacre?  That is to say, where is the IRS employee tasked with screening dozens of targeted liberal organizations whose superiors wouldn't permit any resolutions for months (and ultimately years) on end?  If such an employee exists, don't you think we'd have heard about him or her by now?