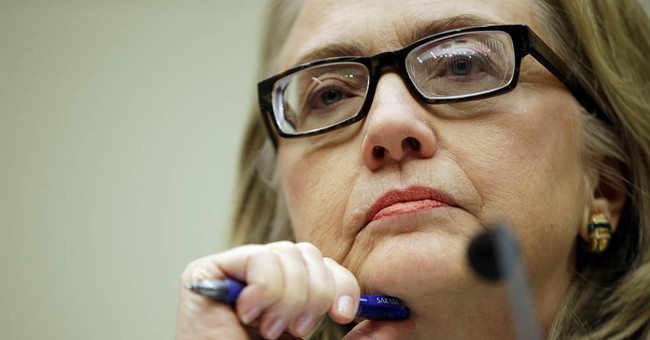 As the American people learn more about the deadly terrorist massacre at the US diplomatic mission in Benghazi, Libya on September 11, 2012, former Secretary of State Hillary Clinton's public image is suffering:

Hillary Clinton’s favorability rating dropped significantly in a Quinnipiac University poll released Friday, as the months-long investigation into the terrorist attacks in Benghazi, Libya, have begun to drag on the former secretary of State.  According to the survey, 52 percent said they have a favorable view of Clinton, against 40 unfavorable. That’s down from her all-time high of 61 percent favorable and 34 unfavorable in February of this year. “Her score is down substantially from her all-time high score in February,” said Quinnipiac director of polling Peter A. Brown in a statement.  “The drop in favorability is substantial among men, Republicans and independent voters. One reason for her drop may be that 48 percent of voters blame her either a little or a lot for the death of the American ambassador in Benghazi.”

She's still above water, but her favorability margin dropped from a robust +27 to just +12 in the span of a few months, and that erosion appears to be largely attributable to Benghazi.  When she left the State Department earlier this year, Clinton's broad public approval led many to conclude that a potential 2016 presidential bid was both likely and invincible.  Some people never bought into that rapidly-congealing conventional wisdom, the purveyors of which may be questioning their position in light of the new polling data.  Clinton would undoubtedly be quite formidable -- and she might even still be the early favorite -- but the notion that she'd sail from cabinet secretary to candidate to president with relative ease looks more suspect than ever.

During her Congressional testimony in January, Clinton became exasperated with questions about the provenance of the administration's inaccurate talking points surrounding the lethal raid.  "What difference does it make?" she asked, visibly perturbed.  The difference, of course, is truth vs. falsehood -- and whether the administration misled the public about the nature of a terrorist attack.  The new Q-poll provides a political answer to Clinton's question, too.  A recent CNN poll showed that a solid majority (59 percent) of Americans believe the government could have prevented the attack.  A majority of respondents in a WaPo/ABC News poll said the administration has engaged in a cover-up, and a Fox News survey reflects strong overall disapproval of the administration's handling of the incident.  The crux of talking points controversy is the mounting evidence that State Department higher-ups demanded the "official" story be scrubbed of certain facts that would reflect poorly on them.  Chief among them was the supportable charge that State ignored numerous red flags leading up to the attack (and worse).  The Weekly Standard reports that the department's own data reveal the perils that were recklessly dismissed, which ended up costing four Americans their lives:

The State Department released its annual Country Reports on Terrorism 2012 survey on Thursday. The section on the Middle East and North Africa includes a report on terror attacks in Libya.  All told, there were eleven terrorism-related attacks last year in Libya prior to the 9/11 attack in Benghazi that took the life of Ambassador Christopher Stevens, Sean Smith, Glen Doherty, and Tyrone Woods. Six of those eleven attacks took place in Benghazi.

Several of those attacks were launched against the US consulate itself, which was ultimately overrun and sacked by dozens of jihadists on the anniversary of 9/11.  A few weeks ago, I  argued on Fox News that the events before, during, and after the Benghazi attacks merit a thorough investigation, and that partisan point-scoring shouldn't be -- and isn't -- the purpose of Congress' hearings into the matter.  The one piece of 2016 analysis I offered was that the greatest threat Benghazi poses to Hillary Clinton's possible presidential ambitions is if the episode comes to define her legacy at State:

Republicans shouldn't read too far into one public opinion data point, but the Q-poll at least suggests that the days of near-universal adulation of Sec. Clinton's job performance may be coming to an end.