'Gang of Eight' Dem: No Major Changes to Our Immigration Proposal, Thanks 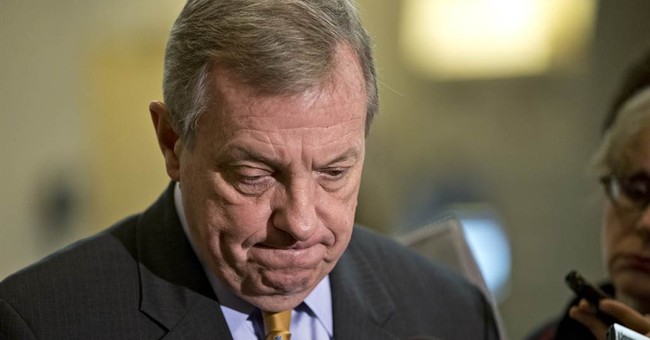 Sen. Dick Durbin -- Harry Reid's top lieutenant and one of four Democrats in the so-called 'gang of eight'  -- says root-and-branch amendments to the proposed immigration legislation would be a non-starter:

A leading Democrat in the U.S. Senate said the bones of an immigration reform bill will remain in place despite some anticipated tweaks. Senate Majority Whip Dick Durbin, D-Ill., said some adjustments to the bipartisan measure were inevitable but the "basic agreement" needed to remain intact. "We have got to basically stick to the standard of what we've established, what we've agreed over the last three months," Durbin said...

One wonders what Durbin thinks of fellow 'gang' member Sen. Marco Rubio, who's been talking up changes to the bill that could very well amount to more than mere "tweaks:"


Rubio, who is the chief emissary to conservatives on the contentious legislation, said in a radio interview and in an opinion piece being published in Friday's Wall Street Journal that he's been hearing concerns in recent days that more work is needed to boost the bill's language on the border and he said he's committed to trying to make those changes. In his Wall Street Journal piece, Rubio cited "triggers" in the bill that aim to make new citizenship provisions contingent on border security accomplishments. Critics say those provisions are too weak, because in some cases the Homeland Security secretary is tasked with undertaking studies — but not with delivering results — before millions in the U.S. illegally can obtain legal status. Rubio also mentioned revisiting "waivers" in the bill that give federal officials discretion in applying the law, another flashpoint for conservative critics; concerns about the bill's cost; and the possibility of making legalization provisions for immigrants already here "tougher, yet still realistic." He didn't offer details.


Improving border security language, cutting down on waivers, addressing the overall price-tag and altering "legalization provisions" -- that certainly sounds like a laundry list of potentially significant changes.  The last sentence of that graf notes that Rubio "didn't offer details."  It might have added, yet.  Specific changes are coming, and possibly a lot of them.  Amendments to the base bill are due later this evening, prior to this week's Senate Judiciary Committee's mark-up session:


Foes and friends of reform are set to offer a slew of amendments to the mammoth immigration bill this week as the Senate Judiciary Committee begins to mark it up. But observers believe that between Democrats, who hold the majority on the committee, and the two Gang of Eight Republicans who wrote the bill, it will emerge from committee largely unscathed. The parade of amendments expected to be offered to the 844-page bill — all of which are due by 5 p.m. on Tuesday — could number dozens or more. The amendments offer a preview of the floor fight over the most sweeping changes to immigration laws in more than two decades.

Supporters and opponents of the legislation anticipate relatively smooth sailing in committee, but warn that the big brawl may break out during the subsequent floor debate -- to say nothing of the bill's fate in the GOP-held House.  Over the last week, Rubio has acknowledged that the legislation in its current form could not pass the House, and may even struggle to emerge from the Democrat-controlled Senate.  The widely-cited "most controversial" proposed amendment involves a form of amnesty for same-sex couples.  I agree with Mickey Kaus that this effort amounts to little more than "poison pill kabuki," wherein liberals introduce an idea with the full expectation of "caving" on it later, thus handing conservatives a negotiating "win."  What will actually be interesting is the substance of the changes introduced by Rubio himself, and fellow 'gang' members' reactions to those revisions. Conservatives remain fractured over how to proceed on immigration reform, tension encapsulated by yesterday's skirmish over a Heritage Foundation's analysis estimating that 'amnesty' would cost taxpayers $6.3 trillion.  Critics of the law, like Sen. Jeff Sessions, have touted the research to rally conservative opposition to the underlying bill.  Other conservatives have assailed the study's methodology.  One prominent criticism is that it shuns conservatives' long-standing preference for "dynamic scoring" when it comes to estimating the cost of a proposed policy.  Meanwhile, public opinion remains schizophrenic.  Take the CBS/NYT poll from last week, for instance.  Allahpundit noted that the survey produced an 83 percent super-majority in favor of a "path to citizenship" for illegals  Sure enough, question 43 bears that statistic out.  But what was question 42 in the exact same poll?

How to reconcile these numbers?  Eighty-three percent of respondents favor a "path to citizenship" in question 43, but one question earlier, only a low-40s plurality seems to embrace that approach.  A 53-percent majority opines that illegal immigrants working inside the US should either (a) be allowed to stay legally without being eligible to apply for citizenship, or (b) face effective deportation.  So that's a pretty soft 83 percent for the 'amnesty then citizenship' track.  But wait, question 44 asks if illegal immigrants should be able to obtain legal status while the border is being strengthened, or only after that task is complete.  A paltry 35 percent of respondents favor the "border security first, then legalization" path -- almost the exact opposite of a recent Fox News poll, which asked virtually the same question.  Perhaps the lesson to derive from these disparate and muddled responses is, beware of dramatic immigration-related polling results offered by either side.  Public opinion is neither as good nor as bad as it may seem, depending on your perspective.  In all likelihood, many Americans are genuinely confused and torn on the issue, which is why words like "bipartisan" and "consensus" are so potent in this debate.