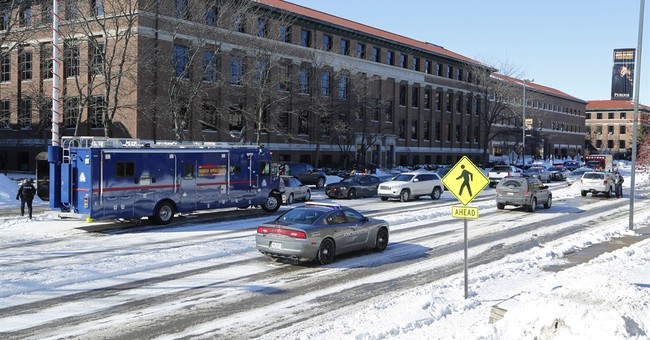 Safety versus political correctness. You’d think it’d be no contest, right? Not necessarily…

On October 19th, there was a security issue on the University of Cincinnati’s campus. Two alerts came out because there were gun shots fired on campus, and they warned “all on campus [to] shelter in place.” A text from campus police went out first, which included a description of the suspect: a black male, 5’10, in gray shorts last seen running toward the baseball field.”

The notice that came out 20 minutes later from the university did not include the suspect’s race.

According to The College Fix, who reported on the story, University of Cincinnati is not alone in censoring their safety alerts:

The University of Maryland and the University of Minnesota Twin Cities have also stopped using them in most cases after students of color complained, reports University Business, which noted ‘race or ethnicity is not included in the suspect’s description if it is the only characteristic provided by a crime victim or witness.’

‘Minority students argue that these alerts are too vague to do anything but stigmatize those — in particular, black male students — who may in fact look nothing like someone actually accused of a crime,’ Inside Higher Ed reports.

Virginia Commonwealth University recently found something of a compromise. The school posts full suspect descriptions on the university’s public safety webpage, but text alerts exclude race descriptors and offer a hyperlink to the full description, reports the Virginia Association of Chiefs of Police.

‘The change was made to deter the development of negative racial stereotypes,’ the association reports.”

Now, I understand that profiling is dangerous. In this situation it could be especially dangerous particularly if an innocent person is mistaken for a gunman and someone tries to stop him.

However, I also understand that in an intense situation like this people want – and need – to be given the most information possible. It’s a lot easier for someone to prove they don’t have a gun than to determine who is a threat based off an article of clothing.

As for the ‘negative racial stereotype’ argument – those can be disproved. They can be fought against by more opportunities for different races to interact. That’s how you dismantle stereotypes – learning about the truth of other people – not by withholding valuable information.