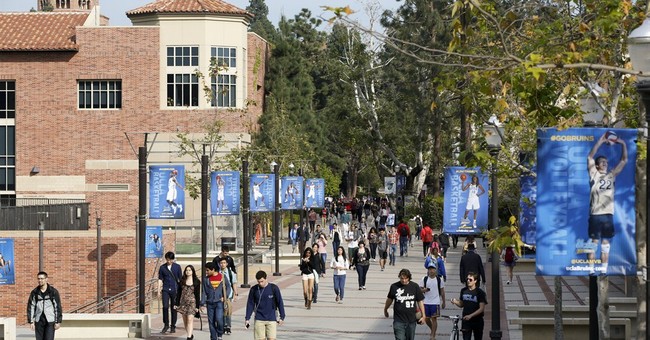 Bruin Republicans, the conservative political group at UCLA, hosted a guest speaker on October 13th. The talk was entitled, “Sabine Durden: An Illegal Immigrant Killed My Child.” Durden, an immigrant herself, spoke about how her son was killed by a drunk driver, who also happened to be an undocumented immigrant with a record for previous DUIs. She made sure to clarify that she wants “everyone to come to the United States, but you have to do it legally.”

Sabine: "You have to do immigration the right way....legal immigrants want to assimilate and contribute to this country."

The Bruin Republicans live tweeted the event, including more Q&A.

Naturally, this was controversial.

The event was opened to the entire student body, so many students who fervently opposed Durden’s perspective attended. They didn’t come to watch. From the Daily Bruin:

“A student’s hums drowned out the words of a speaker at a Bruin Republicans event titled “Sabine Durden: An Illegal Immigrant Killed My Child” on Thursday evening.

Audience members joined in by snapping their fingers, as the student continued to hum to the rhythm of various cultural songs in protest of Sabine Durden’s speech against undocumented immigrants.

But the event devolved into a shouting match between audience members and panelists. A Bruin Republicans member shouted “Deport him!” at the humming student, said Frida Ramirez-Aldapa, a fourth-year human biology and society and French student.

‘The name (of the event) itself creates so much pain,” said Isabel Figueroa, a third-year psychobiology student. “They projected an isolated incident on a helpless population.’

‘People don’t understand that, despite my status, I don’t know my country of origin,’ Palma-Cruz said. ‘I didn’t grow up in Mexico, I speak Spanglish and only know the American system. If I were deported I don’t know what I would do.’

Palma-Cruz said she thinks many undocumented students may have felt uncomfortable speaking out at the event because they worry that exposing themselves can lead to deportation.”

The ‘shouting match’ and show of disrespect inside the actual event was nothing compared to the anarchy outside. Protesters were associated with the “Revolution Club UCLA,” that is self-described as a club that is “dedicated to the emancipation of ALL of humanity! FIGHT the power, and TRANSFORM the people, for REVOLUTION!”

The College Fix described the scene outside the event:

“…protestors took their anger out on an American flag, stepping on it and calling for a total communist revolution.

Some of their chants included: “Is America great today when it wages a genocide against black and brown people. … It’s murdering pigs, it’s murdering police shoot them down without any consequence? Hell no. This whole system is criminal. This event is promoting a racist, fascist, xenophobic agenda. Illegal immigrants are not the real criminals. The criminals are this country and the entire system that feeds on the exploitation and people of the world.”

They also demanded a world “without order for a world free of exploitation and oppression.” When a passerby dared suggest the group leave America if they hated it that much, they responded: ‘No thanks, we’d rather overthrow it.’”

These protesters clearly do not know how to mix passion and disagreement with decorum. They were well within their rights to protest in the way they did, but what did it accomplish? Nothing.

A grieving mother was disrespected for her views, and our national flag was burned.