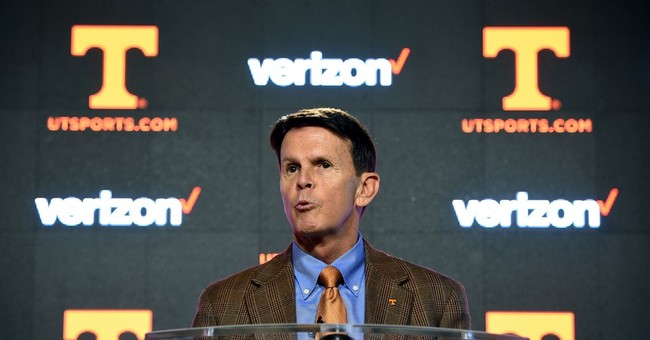 I guess those first day of school name games might actually be important.

Earlier this month, a story broke about Keaton Wahlbon, a student at the University of Tennessee. A few college-news oriented sites have picked up the story, which originated on Total Frat Move, complete with screenshots:

“Keaton Wahlbon is a student at the University of Tennessee who doesn’t remember the names of his TAs, just like the rest of America. Keaton had a geology quiz with Professor Bill Deane and one of the questions on the quiz was “what is your lab instructor’s name? (if you don’t remember, make something good up).” Since Keaton didn’t remember, he put down the first generic girl name he could think of, which was Sarah Jackson.

He ended up getting a zero for that, and a comment of “inappropriate” from the TA.”

Turns out that Sarah Jackson is known for her career in “adult content”.

Screenshots of emails between the professor, Bill Deane, and Wahlbon show that the student’s mistake was not only marked incorrect but was considered sexual harassment. The student rebutted the claim insisting that he had no idea, and that he even “googled ‘Sarah Jackson’ and nothing like that came up so [the TA] had to do some digging or something.” However the Professor sided with the TA, disregarding the high number of Sarah Jacksons in the world, but instead argued:

“I have no way of determining your intention. I can only consider the result. The result is that you gave the name Sarah Jackson, who is a lingerie and nude model. That result meets the Title IX definition of sexual harassment.”

According to the NCAA, that definition involved conduct (sexual or not in nature) that is “unwelcome, is based on sex or sexual stereotyping, and has the effect of interfering with a student’s ability to participate in or benefit from a school program.”

The issue is now being investigated by the University, to determine if there was a breach of Title IX. According to the Knoxville News Sentinel, there was no complaint filed by Wahlbon or the TA but instead “faculty in the Department of Earth and Planetary Sciences raised the issue Monday after spotting a post about the incident online…”

It’s clear to see that this entire issue is absurd. But the problem goes beyond a school grade or the rise of extreme liberalism in cases like this.

The issue is that taking a definition of sexual assault is dangerous and detrimental to strengthening support for actual sexual assault victims. Cases like this fuel arguments that claim that sexual assault is nothing but a bid for attention or that victims are blowing things out of proportion. And that is not okay.